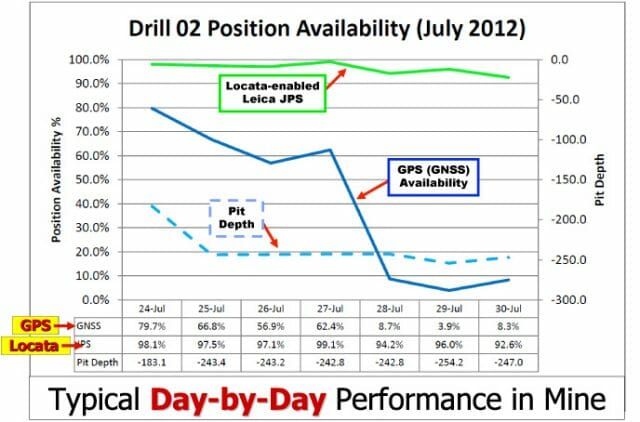 Locata Corporation has announced that its integration partner, Leica Geosystems Mining, has begun to sell and ship to their global mining customers the world’s first Locata-powered positioning systems.

Locata Corporation has announced that its integration partner, Leica Geosystems Mining, has begun to sell and ship to their global mining customers the world’s first Locata-powered positioning systems.

The Leica Jps (the Jigsaw Positioning System) is the first positioning system to integrate global satellite navigation signals such as GPS, and Locata’s ground-based GPS-like networks. This new capability is already delivering unprecedented positioning accuracy, availability, and reliability to the world’s first “industrial-scale” installation at Newmont’s huge Boddington Gold Mine, according to Brendon Lilly, product manager for Leica Geosystems Mining.

In its May/June 2012 issue, Inside GNSS carried a feature article on installation of a Locata-based system at a U.S. Air Force test range in New Mexico.

Locata-enabled nonstop positioning brings great benefits to machine automation in mining because Locata fills in the many gaps in GPS signal availability experienced in an open-cut mine, where satellite signals can be blocked by steep slopes or large mining equipment.

The Newmont Boddington mine recently reported that drill rig up-time and efficiency have skyrocketed to unprecedented levels after the Jps system was commissioned.

“Since deploying the Locata-powered Jps at Newmont Boddington Gold there has been an increase in operational machine guidance availability of almost 23 percent — from 75 percent up to 98 percent,” Lilly said. “Newmont Boddington Gold is so happy with the results that they have turned off their GPS-only solutions altogether, and now rely solely (and successfully) on Jps alone. They have already installed Jps on 11 drills and intend to equip their entire high-precision fleet.” (See accompanying graph.)

In most open-pit environments satellite signals become obstructed, which slows or temporarily halts production. As pits become deeper, the problems become worse, drastically reducing the number of satellites the receiver can “see” to achieve GPS-style positioning.

In the past, mines and other machine automation users had no choice other than to resort to much less efficient alternatives, such as manual surveying. Reduced satellite visibility therefore negated the considerable investment and operational efficiencies gained from modern machine guidance systems.

“We all rely on electricity from public sources, but in areas where outages occur companies invest in backup generators,” said Nunzio Gambale, CEO and co-founder of Locata. “It’s exactly the same scenario for mining companies, where they are dependent on GPS. Locata gives you a GPS backup ‘generator’ — a world-first capability which is clearly a game-changer for the whole industry.”