Ligado Networks had an early-year win in the form of a Federal Communications Commission denial of the National Telecommunications and Information Administration Stay Petition involving Ligado’s license for a terrestrial service in the mobile satellite services L-band. The company continues to roll toward deployment of a nationwide 5G network. While filings trickle in from the private sector, the feds work quietly behind the scenes on Congressional due-outs. In short, wheels big and small keep churning down the river to 5G.

It’s been almost a year and half since the FCC authorized Ligado to deploy a low-power terrestrial nationwide network in the 1526–1536, 1627.5–1637.5 and 1646.5–1656.5 MHz portions of the L-band. After multiple filings to reconsider, and the January 2021 FCC smackdown of the NTIA’s request to stay, scant filings have cruised in from the opposition. Meanwhile, Ligado has put out a spate of announcements; the squeaky wheel gets greased, goes the saying.

A late June ex parte memo of the Joint Aviation Organizations (JAO) seemingly attempted to set the record straight on claims, lanes and funding. The JAO is a group of industry and trade associations, including the Aircraft Owners and Pilots Association (AOPA), General Aviation Manufacturers Association (GAMA), and Helicopter Association International (HAI), among others.

“Not reconcilable with reality,” the phrase JAO used to describe Ligado’s rebuttals, referred to the latter’s labeling as “groundless” the JAO’s concerns about GPS interference for unmanned aircraft systems (UAS) and Helicopter Terrain Awareness and Warning Systems. JAO repeated its position that the portion of the FCC’s order that required an aviation-obstacle database remains within the Federal Aviation Administration’s (FAA) authority, not that of the FCC. Finally, the group stated that, despite its frequent requests, there has been no plan to replace the aviation Inmarsat terminals receiving interference from Ligado operations to the power flux density limit of –56.8 dBW/m2/200 kHz.

In May, Iridium, which completed a $3 billion, 75 state-of-the-art satellite constellation replacement, reiterated its harmful interference concerns. It again asked the FCC to reduce Ligado’s authorized power level in the 1627.5-1637.5 MHz band and impose additional conditions to ensure that Ligado remedies any harmful interference caused to its system.

The Iridium memo circled back to an April 22 letter to President Biden, signed by 98 L-Band network operators and users on the one-year anniversary of the Ligado order. It stated:

“Although Ligado continues to attempt to convince policymakers that its proposed terrestrial service will not cause harmful interference and is somehow critical to American success in 5G, the executive branch and affected parties have repeatedly detailed the adverse economic, national security, and public safety impact of the proposed Ligado operations. As for Ligado’s 5G fallacy, NTIA concluded that ‘an inability to deploy terrestrial 5G or related services using the frequencies involved in the Ligado applications would not hold back the timely deployment of 5G’ across the U.S. Tellingly, Ligado’s spectrum is not internationally harmonized for 5G, nor is it part of any 5G standard.” (Emphasis added).

According to Ligado, “The approvals of SUL band n99 and band combinations will help facilitate the deployments of L-Band spectrum with other mid-band airwaves like the C-Band, CBRS, and EBS spectrum bands.”

On the heels of this announcement, Ligado issued a cluster of media releases relating to new partnerships with old 3GPP friends. On the same day 3GPP approved these helpful standards, Ligado revealed its formal alliance with India-based Saankhya Labs, a company that develops, designs and deploys satcom solutions, including mobile satellite terminals and hub-side baseband. Saankhya characterized the collaboration as working towards evaluating and defining “the adaptation of advanced mobile broadcast technologies for operation on Ligado’s advanced satellite network, as Ligado moves to enable integration of standards-based satellite connectivity in the growing market for mobile broadcast and multicast services.”

On June 22nd, Ligado and Finland-based Nokia revealed their own mutual agreement: “the first in North America,” to build L-band compatible 5G base station radios for standalone services.

Ligado outlined all of this activity in its Quarterly Status Report to the FCC in June. Its earlier April report had applauded the FAA’s publication of Technical Standards Order (TSO)-C132b, Minimum Operational Performance Standards for Geosynchronous Orbit Aeronautical Mobile Satellite Services (AMSS) Avionics (effective Jan. 19, 2021), which it said would enable approvals of modifications to legacy Inmarsat systems, consistent with its plans—the funding for which, as noted above, remains a mystery.

Ligado also mentioned its previously noted collaboration with Japan-based network operator Rakuten Mobile. In their newest update, the two companies said they plan to launch field trials over the next 12 months. 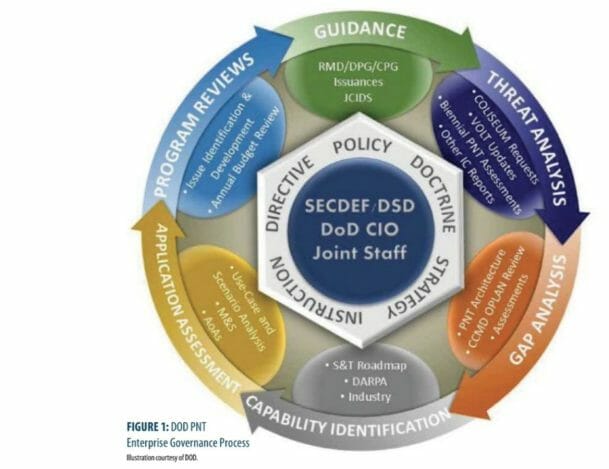 Ligado then closed with, “In the eight years since this Memorandum was signed…neither NTIA nor the Department of Defense (DOD) has submitted any technical analysis that contradicts the memorandum’s conclusions.”

Yet, on December 4, 2020, as previously covered in Inside GNSS, the NTIA formally submitted, on behalf of those very same agencies, a 428-page Assessment of Compatibility between GPS Receivers and Adjacent Band Base Station and User Equipment Transmitters that does just that. This, of course, was in addition to the earlier Department of Transportation (DOT) GPS Adjacent Band Compatibility Assessment, in which DOD agencies presumably participated as NTIA contributors and stakeholders.

While the NTIA and DOD have not gone down the road of specifically responding to this latest volley, they have traveled forward. The DOD is moving out on the studies Congress directed in the fiscal year 2021 National Defense Authorization Act (NDAA).

As a refresher, besides barring the DOD from spending funds in support of Ligado-related equipment or retrofit, the law also required an independent technical review by the National Academies of Science, Engineering, and Medicine of the harmful interference standards (FCC vs. DOT) at issue in the Ligado order. An inside source revealed that the DOD and the Academies currently remain busy putting that team together.

As the Ligado network may interfere with GPS, there is also some news from DOD on its Section 1611 plan for resilient and survivable PNT. Senate staffers confirmed that DOD’s unclassified report was submitted on time. Jules McNeff, Vice President, Strategy & Programs at Overlook Systems Technologies, Inc. in Vienna Virginia, whose prior service includes lead positions in GPS, PNT and Space Information Systems with the Air Force, Office of the Secretary of Defense and NASA, indicates the report is merely an extension of DOD’s 2018 Strategy for the PNT Enterprise.

“Congress was concerned that DOD was not doing much other than waiting for M-Code,” said McNeff, “But the DOD has been very busy with multiple initiatives underway among the services. These include resilient and diverse PNT capabilities and applications that are actually being fielded right now,” he explained.

“Because of the diversity of systems and challenges DOD has to meet, there is no one single solution like GPS, or one set of integrated solutions. This is why the DOD is focused, across the board, on a layered and Modular Open Systems Approach (MOSA),” he continued.

“The services need to be able to plug and play. This requires the ability to plug different capabilities into a system through standard interfaces to achieve different effects while also being able to add and delete things as the situation demands or requirements change.”

The R&D and search for best GPS alternative or complementary solutions in the DOD continues. 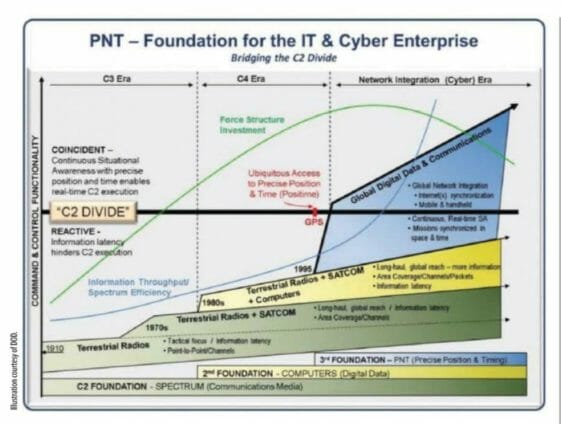 In the meantime, there has been no FCC action on the Ligado Reconsideration Petitions. And even in the face of pleas to POTUS, mum seems to be the word from those who are actually driving the federal government PNT enterprise. Perhaps the feds are collectively taking a wait-and-see approach. Perhaps they will not go full pedal-to-the-metal on interference claims until the Ligado net actually rolls out and the various parties experience interference.

And so the wheels keep on turning, and Ligado continues rolling downriver towards construction of its 5G network.