As 2020 comes to a close, the Ligado Networks LLC’s (Ligado) mobile satellite services (MSS) project remains at a standstill. While actions in the Federal Communication Commission (FCC) proceedings in the case have stagnated, Congressional action, funds and filings have flowed.

Now a new administration will take the helm. As we ring in 2021, what might become of Ligado’s deployment of a low-power terrestrial nationwide network in the L-Band that some continue to say will interfere with mission-critical Global Positioning System (GPS)?

Congress: A Resolution to Resolve

In early December, the Senate Committee on Armed Services, in reporting out the fiscal year 2021 National Defense Authorization Act (NDAA), sent a strong message on Ligado: stand down until the “harmful interference” issue is resolved. At issue: the Ligado-proposed and FCC-approved criteria of harmful interference to determine how select receivers are impacted versus the Department of Transportation study method of determining an allowable level of noise adjacent to the relevant spectrum.

It all boils down to a dispute as to whether or not the 1 dB C/N0 interference metric is the correct standard to use.

The FCC, siding with Ligado, does not.

And so, in Sec. 1663, Independent technical review of Federal Communications Commission Order 20–48, the Senate Committee included a provision to require the Secretary of Defense to enter into an agreement with the National Academies of Science, Engineering, and Medicine (NAS, NAE and NAM respectively) to conduct an independent technical review of the FCC’s April 19, 2020 order granting Ligado’s amended license application to compare “the two different approaches used for evaluation of potential harmful interference” and submit a report on it.

The testers, the three National Academies, are private and nonprofit honorific societies whose origins are rooted in law. Congress established the NAS in 1863 as a “private, nongovernmental institution to advise the nation on issues related to science and technology.” The NAS chartered the other two specialized organizations: the NAE in 1964 “to bring the practices of engineering to advising the nation” and the NAM (formerly the Institute of Medicine) in 1970 “to advise the nation on medical and health issues.”

Members of all three Academies are peer-elected for outstanding professional expertise and contributions in their respective fields. They “work together to provide independent, objective analysis and advice to the nation and conduct other activities to solve complex problems and inform public policy decisions.” Sounds about right.

The Academies would have to provide a report that must include a recommendation on the way ahead within a 270-day window from the execution of the DoD-Academies’ agreement, for the report’s submission. However, in the meantime, a four-year National Telecommunications and Information Administration (NTIA) testing and analysis effort, finally achieved Interdepartment Radio Advisory Committee (IRAC) member consensus. It dropped, perhaps not coincidentally, just before the FY21NDAA Conference Report.

Technically Speaking, We Have a Problem

On December 4th, the NTIA formally submitted into the FCC’s Ligado record an Assessment of Compatibility between Global Positioning System Receivers and Adjacent Band Base Station and User Equipment Transmitters to supplement its still-pending May 2020 Petition for Reconsideration or Clarification in the Ligado matter.

In creating this 428-page report, the NTIA collaborated closely with the FCC’s IRAC, consisting of 19 federal agencies’ representatives who have been advising the Assistant Secretary of Commerce for Communications and Information since 1922 on spectrum issues. In the report, the NTIA credited the work of the Ligado-specific Technical Focus Group (TFG), which included Engineers from NTIA’s Office of Spectrum Management as well as the United States Air Force GPS Directorate, DoE, DoT, FAA, NASA, the DoD Office of Chief Information Officer.

The researchers acknowledged, up front, that it was difficult to isolate the specific interference mechanism for each GPS receiver in the different measurement programs without sufficient technical information (e.g., receiver design, radio frequency filter selectivity, and low noise amplifier specifications from the GPS receiver manufacturers. According to the text, they did not provide it. Rather, the team used publicly available information upon which to base their assumptions to measure 300 different high precision (HP), general location/navigation (GLN), timing (TIM), cellular (CEL), and general aviation GPS receiver categories to assess compatibility with Ligado’s proposed base station and user equipment operation. The researchers specifically focused on the degradation in carrier-to-noise density ratio (C/N0), loss-of-lock, position error, and increase in acquisition/reacquisition time for GPS receivers.

The bottom-line conclusion of NTIA’s tech report: We have a problem. The report concludes:

There are large variances in interference power levels expected to cause a 1 dB C/N0 degradation for most GPS receiver categories (78 dB for HP receivers, 71 dB for GLN receivers, 51 dB for TIM receivers, and 25 dB for CEL receivers). This degradation can affect the code tracking loop error (the code delay in the presence of a small frequency error) for medium accuracy applications and the carrier tracking loop (performs the task of aligning the local generated carrier with the incoming signal) for high accuracy applications. 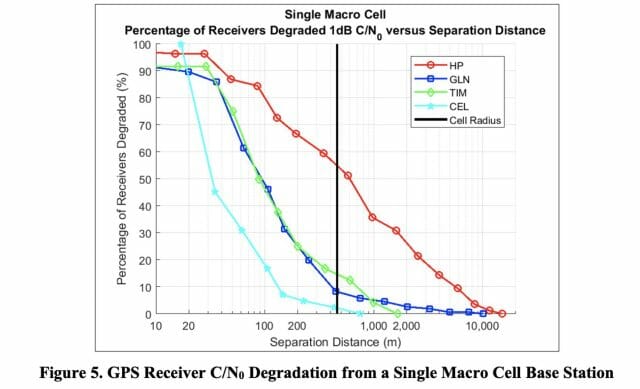 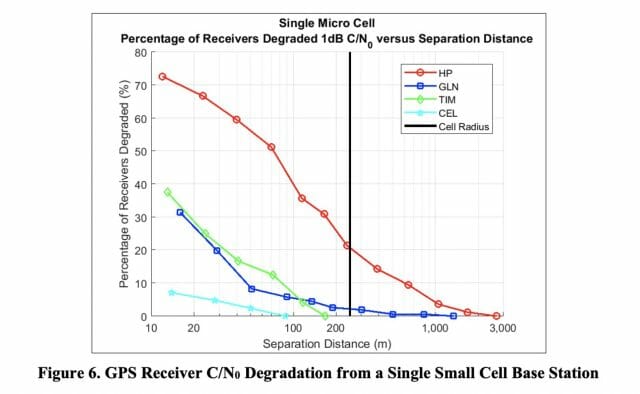 Figure 6 summarizes the analysis results, showing the percentage of receivers with a 1 dB C/N0 degradation as a function of separation distance for each GPS receiver category.

For the measured HP receivers, a separation distance of greater than approximately 2,697 meters from a microcell base station would be necessary to preclude a 1 dB degradation in C/N0. Distance separations from a single base station in the 1526-1536 MHz band to avoid potential degradation in C/N0 for all receivers are approximately 10 km for an Equivalent Isotropically Radiated Power (EIRP) of 62 dBm/10 MHz (32 dBW), and between 1 to 2 km for an EIRP of 39.8 dBm/10 MHz (9.8 dBW).

Table 1 provides the percentage of GPS receivers that will experience 1 dB C/N0 degradation within a cell for the four base station deployments.

The analysis results (e.g., required separation distances and EIRP) do not significantly change when a 1 dB, 3 dB, or 5 dB C/N0 degradation criterion is applied for HP and GLN receivers.

The external antenna filter selectivity can be a contributing factor to the interference power level that causes degradations in C/N0. The interfering signal level necessary to cause a given C/N0 degradation can vary by up to 70 dB depending on the spatial and/or band limiting filtering provided by the external antenna employed. Antenna variability, specifically filtering and the 1 dB gain compression point for the LNA, complicates the selection of an allowable C/N0 degradation for the different categories of GPS receivers. Antenna filtering can cause deleterious effects on receiver performance, such as group delay and other distortions that were not examined, but should be before any decisions are made based on antenna filtering techniques.

Thus, it appears there remains potential for harmful interference from the proposed terrestrial operations – and more study is needed on the solution.

On the upside for Ligado, the company side-stepped its potential for a second bankruptcy. The MSS provider had a looming December 2020 deadline to cough up $2 billion (B) in loans due. In the month of October, JPMorgan Chase & Co, a controlling owner, spearheaded a successful campaign for fresh investments that paid the bills, and then some. Despite a lagging pandemic economy, less than thirty days after launch, JPMorgan netted Ligado an impressive $3.85B, almost double the amount needed to cover the debt. In a media statement, Doug Smith, Ligado President and CEO is quoted as saying, “Today is a great day, and now the fun begins.”

It wasn’t until recently, however, that JPMorgan could exercise its ownership interests. For almost four years after Ligado (then Light-Squared) emerged from bankruptcy, the FCC held up any transfer of licenses and authorizations during the pendency of a felony antitrust violation for which JPM ultimately reached a 2017 plea deal with Justice. In an Order released February 8, 2019, citing “mitigating circumstances” concerning the company’s conviction, the FCC found that JPMorgan “demonstrated that it possesses the requisite qualifications, including those of character, to exercise directly its ownership interests in Ligado Networks.”

On January 20, 2021, a new administration will take the helm. As with most administrations, changes will occur at the top of every federal agency, including the FCC. As Chairman Pai readies to depart, speculation abounds on a potential Biden pick. Regardless, 5G deployment is a bipartisan issue, as is national security. Brookings experts predict that the Biden-Harris FCC “will likely continue to accelerate spectrum availability for 5G commercial use.”

The views and opinions in this article are those of the author and do not reflect those of the DOD, do not constitute endorsement of any organization mentioned herein and are not intended to influence the action of federal agencies or their employees.

Dawn M.K. Zoldi (Colonel, USAF, Retired) is a licensed attorney and a 25-year Air Force veteran. She is an internationally recognized expert on unmanned aircraft system law and policy, a recipient of the Woman to Watch in UAS (Leadership) Award 2019, and the CEO of P3 Tech Consulting LLC.