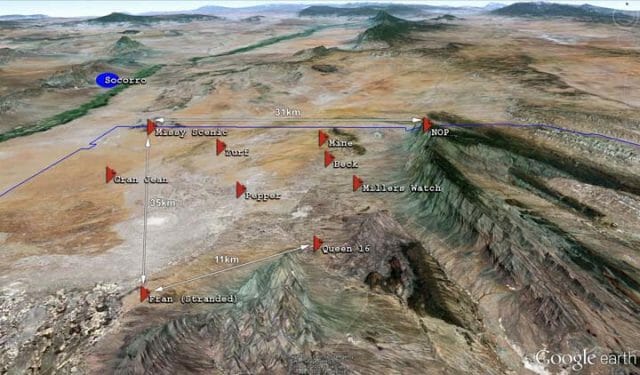 A technology demonstration version of the Locata
system developed by Locata Corporation, Canberra, Australia, was
installed on the New Mexico test range and tested successfully last year. TMC Design, of Las
Cruces, New Mexico, built and configured the NGBPS LocataLite
transceiver “slave boxes” for the tech demo and is certified as a Locata
Technology Integrator (LTI) to build and install military systems in
the United States.

Under the recently announced contract, TMC
Design will design, integrate, install, and test the NGBPS system to
provide the 746 TS with highly accurate “truth data” covering a large
proportion of WSMR. The system will serve as a critical component for
the realization of the squadron’s new Ultra-High Accuracy Reference
System (UHARS) there.

The Locata system will give the 746 TS
an enhanced capability to evaluate the operations of mobile and airborne
position, navigation, and timing (PNT) equipment in GPS‐denied
environments. TMC Design also supplies electronic warfare (EW) systems,
including GPS jammers, to all branches of the U.S. Department of Defense
(DoD) use in exercises requiring certified systems.

The
operational installation of the NGBPS system will consist of both fixed
and mobile Command and Control (C2) nodes, and a network of LocataLite
transceivers deployed on WSMR. The Locata NGBPS system is capable of
operating in combination with GPS, or completely independent of GPS,
depending on 746 TS mission requirements.

The 746 TS is the
GPS Test Center of Expertise and the DoD’s lead test organization for
evaluating GPS user equipment and GPS-based guidance and navigation
systems. The WSMR UHARS is designed to meet the increasingly demanding
test and evaluation needs of future DoD navigation systems.

“At
TMC Design, we fully understand that this Locata-based NGBPS will
provide the 746 TS with an unprecedented capability,” said Chris Ham,
President and CEO for TMC Design Corporation. “It will allow [the 746
TS] to provide a technically superior test environment for the
evaluation of DoD guidance, navigation, and NAVWAR systems in support of
the warfighter in GPS-denied conditions.”

“Locata will be
the essential element which powers the USAF’s new ‘gold standard GPS
test system,’ supplying continuous centimeter-level positioning when GPS
is completely jammed,” said Nunzio Gambale, Locata CEO. “Now that we
have completed the development and contract negotiation stage and our
system is to be physically deployed for operational use across WSMR, we
rely heavily on the professionalism and expertise of our integration
partner, TMC, to build out and install the Locata ground infrastructure."

“Our
team looks forward to working closely with TMC and the 746 TS to make
the system operational for the USAF in Q3 of this year,” Gambale added.
“This Locata‐based system will usher in a new era of advancement for the
746 TS, and the U.S .military’s GPS capability.”

Locata
Corporation — headquartered in Canberra, Australia and with a U.S.
office in Las Vegas, Nevada — is the proprietary inventor, designer, and
manufacturer of LocataLite transceivers.