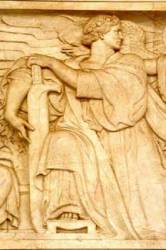 On Friday (April 15, 2011) the Obama administration asked the U.S. Supreme Court to take up the question of whether prolonged police surveillance using GNSS-aided tracking of a suspect requires a search warrant under the provisions of the Fourth Amendment to the U.S. Constitution.

On Friday (April 15, 2011) the Obama administration asked the U.S. Supreme Court to take up the question of whether prolonged police surveillance using GNSS-aided tracking of a suspect requires a search warrant under the provisions of the Fourth Amendment to the U.S. Constitution.

A team of Department of Justice attorneys headed by Acting Solicitor General Neal Katffial submitted a petition for writ of certiorari — the formal method by which judges agrees to hear an appeal from a lower court — in a 2010 case decided by the District of Columbia Circuit Court of Appeals.

The Fourth Amendment to the Constitution asserts the right of U.S. citizens “to be secure in their persons, houses, papers, and effects, against unreasonable searches and seizures” without a court warrant issued with “probable cause.”

In the D.C. case, the appellate court reversed a trial court conviction and voided the life sentence given to a defendant charged with conspiracy to distribute illegal drugs because the conviction "was obtained with evidence procured in violation of the Fourth Amendment,” in this case a “GPS tracking device” placed on a suspect’s car and monitored for about a month. The reversal on the grounds of warrantless surveillance with the aid of GPS was the only one of five key objections raised by defense attorneys in their appeal of the original conviction with which the D.C. Court of Appeals agreed — but it was enough to overturn the lower court.

As described in the attorney general’s petition, “The GPS device communicated with orbital satellites to establish the device’s location. . . . It was battery powered and accurate within 50 to 100 feet . . . and it generated data only when the Jeep was moving. When the vehicle was not moving, the device was in ‘sleeping mode’ in order to conserve its battery.”

The D.C. Appellate Court decision is at odds with two other U.S. appellate courts that recently upheld convictions in similar cases involving GNSS-aided tracking. However, in neither of those cases did the defendants argue that “prolonged surveillance” of a person’s movement made practically possible — given the cost and staffing considerations of visual surveillance by police officers — only with the aid of GNSS technology amount to a “search” under the terms of the Fourth Amendment.

Arguments in the D.C. case explicitly addressed questions as to whether technological advances such as GNSS, thermal imaging, and networks of surveillance cameras represent only a “change of degree” in exisiting police procedures or a new “kind” of activity that may be subject to Fourth Amendment protections.

It also implicitly raises more general issues of people’s expectations of a right to privacy in the face of uninvited knowledge about their location and movements — such as arise in stalking situations and companies’ use of information about their customers to create commercial products and services.

Prosecutors in the D.C. drug case and the U.S. attorney general’s office in its petition to the Supreme Court argued that tracking a vehicle operating in on public roads does not require a warrant because people have no expectation of privacy if they choose to “expose” themselves to the public in such places. The government attorneys also compared use of GPS to other law-enforcement techniques such as visual surveillance by policy officers.

The D.C. appellate court, however, drew a distinction between the short-term observation of a suspect on a specific journey or during a short time period and the sustained monitoring that took place in this particular case. It also ruled that the diverse and detailed information about a person from long-term surveillance was different in nature from short-term observations.

“When it comes to privacy. . . precedent suggests that the whole may be more revealing than the parts,” the judges wrote in their August 6, 2010, opinion.

The court also rejected the government’s argument that means used to help established the drug conspiracy — the GPS device installed in the suspect’s vehicle — was irrelevant.

“Continuous human surveillance for a week would require all the time and expense of several police officers, while comparable photographic surveillance would require a net of video cameras so dense and so widespread as to catch a person’s every movement, plus the manpower to piece the photographs together,” the court wrote.

“A reasonable person does not expect anyone to monitor and retain a record of every time he drives his car, including his origin, route, destination, and each place he stops and how long he stays there,” it said, in rejecting the government’s claim that the defendant had given up an expectation to privacy by going into public space.

The court also noted that several states — including Utah, Minnesota, Florida, Oklahoma, Hawaii, Pennsylvania, and South Carolina — have enacted legislation requiring the government to obtain a warrant before it may use GPS tracking technology.

In addition to citing the conflicting results in the other appellate courts, the Department of Justice lawyers argued that the D.C. opinion would prevent a widespread police practice of GPS-aided surveillance, did not give sufficient guidance in distinguishing between short-term surveillance that would not require a warrant and long-term monitoring that would, and could even lead to a prohibition on long-term human visual surveillance.

For the Supreme Court to grant a writ of certiorari it needs a minimum of four of the nine justices to agree to hear the case and typically grants only about one percent of the petitions that it receives. The fact that Chief Justice John Roberts gave the attorney general’s office two extensions of deadlines for filing the petition could indicate that the Supreme Court may be sufficiently interested in the case to take it and the other appellate court decisions up for consideration.