GPS Not Off the Hook at U.S. Department of Transportation’s Distracted Driving Summit - Inside GNSS - Global Navigation Satellite Systems Engineering, Policy, and Design 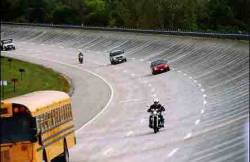 News reports about the U.S. Department of  Transportation (DoT) Distracted Driving Summit now underway in Washington, D.C., (September 30–October 1) have focused on the role of mobile phones in vehicle accidents. According to transportation officials, driver distraction was involved in 16 percent of all fatal crashes during 2008.

News reports about the U.S. Department of  Transportation (DoT) Distracted Driving Summit now underway in Washington, D.C., (September 30–October 1) have focused on the role of mobile phones in vehicle accidents. According to transportation officials, driver distraction was involved in 16 percent of all fatal crashes during 2008.

But the growing number of portable navigation devices (PNDs) and onboard navigation systems have not escaped the scrutiny of DoT and the National Highway Traffic Safety Administration (NHTSA).

In a September 2009 NHTSA research note distributed at the summit, “An Examination of Driver Distraction as Recorded in NHTSA Databases,” onboard navigation systems are identified as one of eight factors related to distracted driving in the agency’s Fatality Analysis Reporting System.

Other NHTSA research publications have focused on GNSS-based navigation systems even more closely. An April 2008 technical report,“Driver Distraction: A Review of the Current State-of-Knowledge,” authored by Thomas A. Ranney, Transportation Research Center, Inc. (TRC), in Ohio, observed that “secondary tasks” that require drivers to look away from the roadway (for example, to view a navigation map display) are likely to interfere with drivers’ abilities to visually monitor the roadway ahead. “Moreover, the effort devoted to interpreting the map display is likely to interfere with drivers’ ability to interpret an emerging hazardous situation ahead,” the report said.

Although such systems may be helpful to drivers in unfamiliar locations, they have the potential to distract drivers in several ways. Those identified in the TRC report include the physical distraction associated with manual destination entry, which typically uses a keyboard; the visual distraction when looking at the display while entering a destination or viewing a map or directions; the aural distraction when listening to auditory turn-by-turn instructions, and also the cognitive distraction when the driver thinks about the information presented by the system.

“There is also some evidence to suggest that the mere presence of a navigation system in a vehicle might encourage increasingly frequent and unnecessary use of the system, including browsing through lists of attractions,” the report states, and suggested that “destination entry can be a time-consuming process and is considered the most distracting component of using in-vehicle navigation systems.”

A March 2007 NHTSA technical report — “Characteristics of Voice-Based Interfaces for In-Vehicle Systems and Their Effects on Driving Performance” — examined the results of a track test experiment on the disruptive effects on driving of complex secondary tasks — specifically simulated in-vehicle navigation and mobile phone use.

In the test, 36 drivers in three age groups (18-25, 30-45, 50-60) drove an instrumented vehicle while performing a combination of car following, peripheral target detection, and secondary tasks on a closed track.

Four variations of the navigation task were used, including combinations of two factors: (1) mode of information acquisition (auditory vs. auditory + visual map), and (2) system reliability (no recognition errors vs. 20% errors). All secondary tasks were implemented with a hands-free voice interface.

The results indicated significant degradation of driving performance associated with all secondary tasks. Specifically, drivers exhibited higher levels of steering entropy, which measures the number and magnitude of steering corrections relative to a baseline drive, and slower car-following responses.

Secondary tasks that required drivers to look at a map while interacting with the traveler information system were consistently more disruptive than similar tasks that did not require the map for all performance measure categories.

Ironically, the Distracted Driving Summit website provides a link to an associated Twitter site where viewers can “join a live interactive webcast” — presumably not doing so by using a PDA or smart phone while driving.