LabSat by Racelogic is looking forward to sharing news on technology developments and product launches at ION GNSS+ in Miami, Sept. 26-28.

After a year’s development, the company is announcing a major update of its SatGen simulation software for use with LabSat 3 Wideband. SatGen software allows you to create a GNSS RF I&Q or IF data file that can be replayed on a LabSat which is based on a user-generated trajectory file. This allows you to simulate almost any kind of test, at a set time and date, anywhere in the world, according to the company.

With this update, the software now includes simulation of the L2C and L5 GPS signals. SatGen V3 can now be used to create one scenario containing all 13 signals from GPS, GLONASS and BeiDou constellations.

The simulation accuracy has also been improved. For example: most of GPS pseudorange residuals are now sub-meter, according to Racelogic.

This latest version of SatGen can simulate all of the following signals simultaneously:

LabSat by Racelogic will be at Booth A at ION GNSS+. In addition to SatGen V3, the company is introducing the VBOX Indoor Positioning System. They will be demonstrating the new solution for accurate position and velocity in the absence of any GNSS signals. 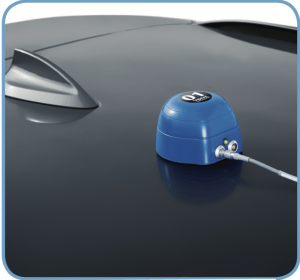 The VBOX Indoor Positioning System consists of a network of fixed beacons and a stand-alone receiver which computes its position 100 times a second to around 5cm rms accuracy. The system can be used on its own or with an internal IMU to improve the velocity accuracy.

Racelogic has been working closely with existing VBOX customers, and developed a solution which allows the same test equipment and software that has traditionally been limited to outdoor use, to now be used anywhere where satellites coverage is limited or completely unavailable.

The system consists of a network of fixed beacons communicating with a small receiver mounted on the roof of the vehicle, which is connected to an existing VBOX. A standard VBOX IMU is installed in the receiver, further enhancing the accuracy of the velocity signal as well as providing vehicle attitude information.

The VBOX seamlessly switches between outdoors and indoors, allowing testing to continue whatever the environment, allowing VBOX users to make use of their original hardware and software applications.