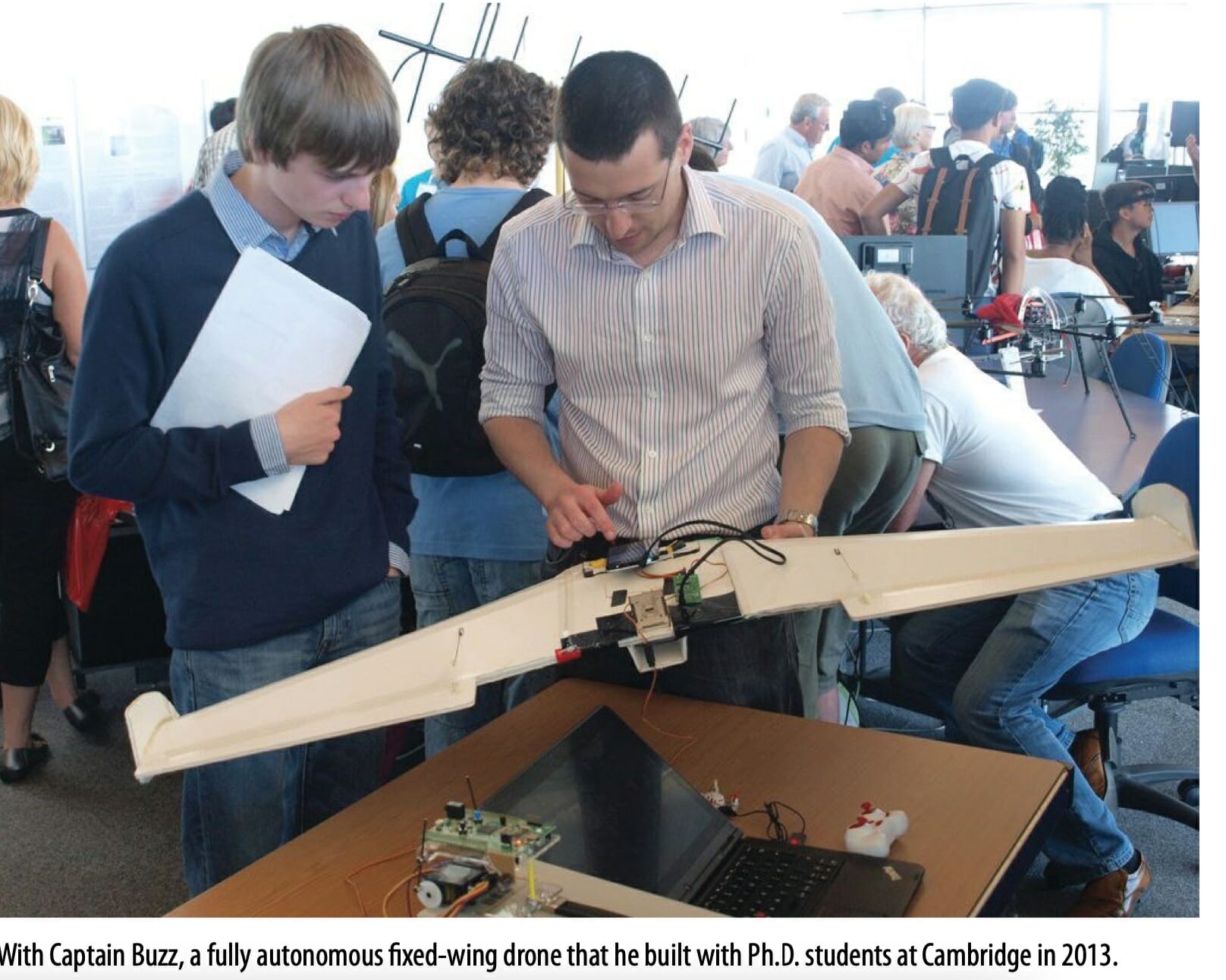 FocalPoint Positioning, founded in 2015, is, as they say, very happening. Its Supercorrelation is a chipset-level software product for mobiles, wearables and vehicles that is changing the positioning game in urban environments. Interesting and energetic, FocalPoint founder Ramsey Faragher came out of the defense industry and has a risen rapidly in the GNSS firmament.

Founder, President and chief technical officer of FocalPoint Positioning, Ramsey Faragher is passionate about what he does and fully awake to the positive and far-reaching impact of positioning and timing technologies. Like many people of his generation, advanced space systems—at least those of the imagination—played a role during his formative years. “I’m from a quite small family, one brother and two male cousins, all older than me, so I had a rough-and-tumble and very Star Wars-themed childhood,” Faragher said.

To what extent Skywalker & Co., or for that matter Darth Vader, determined his destiny is probably better left for another discussion.

“I grew up in suburbia, outside Liverpool in the Northwest of England,” Faragher said. “My dad is from the Isle of Man, and that explains my name. You see, it’s an old tradition on the Isle of Man that if you move away, you name your children after places there. Ramsey is the town that my dad grew up in, and so here I am, Ramsey!”

His mother grew up in Liverpool, and his parents met when his father was a student at Liverpool University. “My dad was an engineer for Plessey, the electronics firm,” he said, “and my mum helped to run my uncle’s family business selling hi-fi equipment.”

Though he grew up decidedly Liverpudlian, Faragher went off to study at Cambridge University and has now lived most of his life in that august institution’s city and environs. He has therefore, by now, lost all traces of that funny Scouse accent made famous by some of his hometown’s other celebrated sons. “I neither sound like Paul McCartney, unfortunately, nor Wayne Rooney, thankfully,” Faragher said. [Rooney is an English professional football manager and former player.]

“I was very active when I was a kid: sport, musical instruments, learning to fly with the Air Cadets. I carried on juggling all three of these interests into my university days, along with academia. My older brother, Paul, is a chemist, so we are quite a sciencey family.” Business also runs in the blood, although it took Ramsey a while to realize it. “My uncle and my godfather both ran their own businesses,” he said, “but I never thought for a moment growing up that I would eventually do the same.”

Faragher said he considers himself lucky, incredibly so, and he surely is: “I have very supportive and caring parents. They always encouraged me to excel in whatever I turned my hand to.” And that, as it does, made all the difference in the world.

In 2004, Faragher graduated from University of Cambridge, Churchill College, Natural Sciences, specializing in experimental and theoretical physics, M.Sci and B.A. (Hons), First Class Honors. He then turned his hand to a doctorate. His destiny had begun to take shape.

“In 2004,” Faragher recalled, “I started my Ph.D. on the ‘Effects of Multipath Interference on Radio Positioning Systems.’ I was using the 2G cellular signal as my main research focus, as my Ph.D. was sponsored by Cambridge Positioning Systems, who developed cellular positioning technologies. I was of course using GPS as my reference to compare performance against—just lonely old L1 C/A via a 12-channel SirfStar III chip.”

The goal was to try to develop improvements in the error models used by Cambridge Positioning Systems. “I was able to experimentally verify a theoretical model I developed to estimate the expected error distributions in different signal environments.” Faragher helped to assess the stability of various mobile phone timing networks to aid in an assisted GPS technology called E-GPS, a patent portfolio now owned by Qualcomm.

“I also had fun determining experimentally just how stable and reproducible multipath interference could be indoors using atomic clocks and seismograph pen plotters to move antennas overnight across a room at a snail’s pace.”

By 2007, Faragher had earned his Ph.D. in physics, but this wasn’t the only critical outcome of his final years as a student. “Alexandra and I met at Cambridge University,” he said. “It was at another college, Homerton College, where I had been invited as a visitor by my Ph.D. officemate. As it happened, I was late for dinner, and on arriving I couldn’t see my friend anywhere.

From 2007 to 2013, Faragher worked at the defense multinational BAE Systems. “I’ve been fortunate to work on some incredible projects, especially during my time in the defense sector,” he said. “It was somewhat of a golden age for me. I arrived with knowledge and experience in the area of opportunistic radio positioning, just as the UK defense sector was starting to get concerned with the risks of GPS jamming and spoofing and the need for alternative positioning solutions.”

Faragher was immediately given the opportunity to develop an alternative system for the Wildcat program, the UK’s first fully autonomous, unmanned ground vehicle. “I developed two independent systems,” he said, one of which exploited SLAM [simultaneous localization and mapping] in order to build up its own database of cellular transmitters. “I was working in BAE Systems Advanced Technology Centre, which acted as a hub of scientific experts that all of the main business units could tap into for help.”

Having exceeded expectations in his very first project for the company, Faragher was asked to get involved in many of the other GNSS-denied positioning projects across the whole company. Within an 18-month window he worked on the navigation system of the Astute nuclear submarine and the Mantis Unmanned Aerial Vehicle, and was part of the original design team for the Seeker navigation system on the ExoMars Martian rover.

“I went on to lead teams that developed indoor positioning systems for soldiers, collision avoidance systems for military vehicles in zero visibility, a system enabling small UAVs to auto-land without GPS, and a system for docking autonomous marine surface vessels with larger surface vessels,” he said.

Unfortunately, BAE Systems decided to close the Advanced Technology Centre and, in 2013, Faragher accepted an invitation to return to Cambridge University as a senior postdoctoral researcher. It was a homecoming of sorts, and he quickly secured projects with Cambridge Silicon Radio (CSR) and Google to investigate Bluetooth Low Energy (BLE) indoor positioning accuracy, and developed the first real-time SLAM indoor positioning system for a smartphone.

“It was during that time that I also started to think about making changes deeper within smartphones,” Faragher said,” and making use of sensor fusion and new signal processing techniques right down inside the chipsets. I finally made the decision to leave the University and start up FocalPoint Positioning, where I developed Supercorrelation.”

Supercorrelation encompasses new signal processing methods for the correlation stage of a GNSS receiver that enable many seconds of coherent integration while the receiver system is undergoing dynamic motions. These innovative methods can be implemented in low-cost, consumer-grade receivers such as those found in smartphones.

“Supercorrelation combines signal processing, machine learning and sensor fusion, and we have a huge amount of confidence in the abilities of our stellar team of experts with a wide range of backgrounds,” Faragher said. The result is a chipset-level software product for mobiles, wearables and vehicles that is ten times more accurate than previous solutions in urban canyons, that features ten times higher integrity and delivers a three-to-ten-times sensitivity boost indoors. It is designed for the modern system-on-a-chip silicon architecture used by all consumer GNSS receivers. That means it requires no extra hardware or infrastructure and fits into existing architecture as a software upgrade.

“Taking Focal Point Positioning from an idea in my head to licensing deals with huge names in the industry like u-blox has been an incredible experience,” Faragher said. “There was the initial gamble that what we were developing and patenting really was brand new. There is always a risk that another entity is developing the same technology, is just a little bit ahead and is simply yet to publish their patents. Thankfully we really did manage to beat everyone else to this particular punch.”

More recently, some of Faragher’s recommendations have been taken on by various entities, big and small, using BLE measurements for pandemic-related applications.

Faragher is still in touch with the folks up North, “but it’s 200 miles between Cambridge and Liverpool, so we only manage to visit each other a few times a year,” he said.

And then there’s that attractive girl with her hands full. About Alexandra, he says “I have a very supportive and understanding wife! We have four-year-old twins, Loran and Aobh, and a three-month-old, Leah. They are all still quite young, but the twins are already full of personality and opinions. There is a lot of practical engineering going on at the moment, ranging from fixing broken toys, putting shelves back on walls, and making things out of edible objects.”

Faragher said he has managed to combine professional life, home life and parenting, “as best as is possible for a startup founder,” although we are sure he merits a full pardon. “I work every day, but only because I enjoy what I do so much,” he said. “I think I’m not uncommon among start-up founders who work twice as many hours a week as most people – the usual nine-to-five with everyone in my company, then I spend time in the evening with my family, but then I have a second work stint from around 9:00 pm to midnight or later. There’s always some catching up on the weekend too.”

All work means little time for play, and work has been plentiful at FocalPoint for the past few years, but Faragher said he is hoping to soon be able to get back into sport and flying. “I’m also an avid Formula One fan, and a pretty dangerous go-kart racer,” he said. We are confident that he is more careful when designing positioning technologies than when he drives a go-kart.

Either way, Faragher is a man who likes to keep moving. “I’m not really the sort of person who sits still and looks out the window wondering what to do,” he said. “When we do manage to get a holiday, I’m normally dragging people off on a hike or to visit some local attraction.

“It’s been a bit of a strange era, with the pandemic, but I’m looking forward to getting back to travelling again, for business or pleasure, and seeing more parts of the world,” Faragher said. “In the meantime, we have been making do with baking cakes and making gingerbread men, and trying to find a bigger house to fit the ever growing family into.”

Don’t fret, Faragher. For you, for your family and for your company, bigger things would appear to be on the horizon.