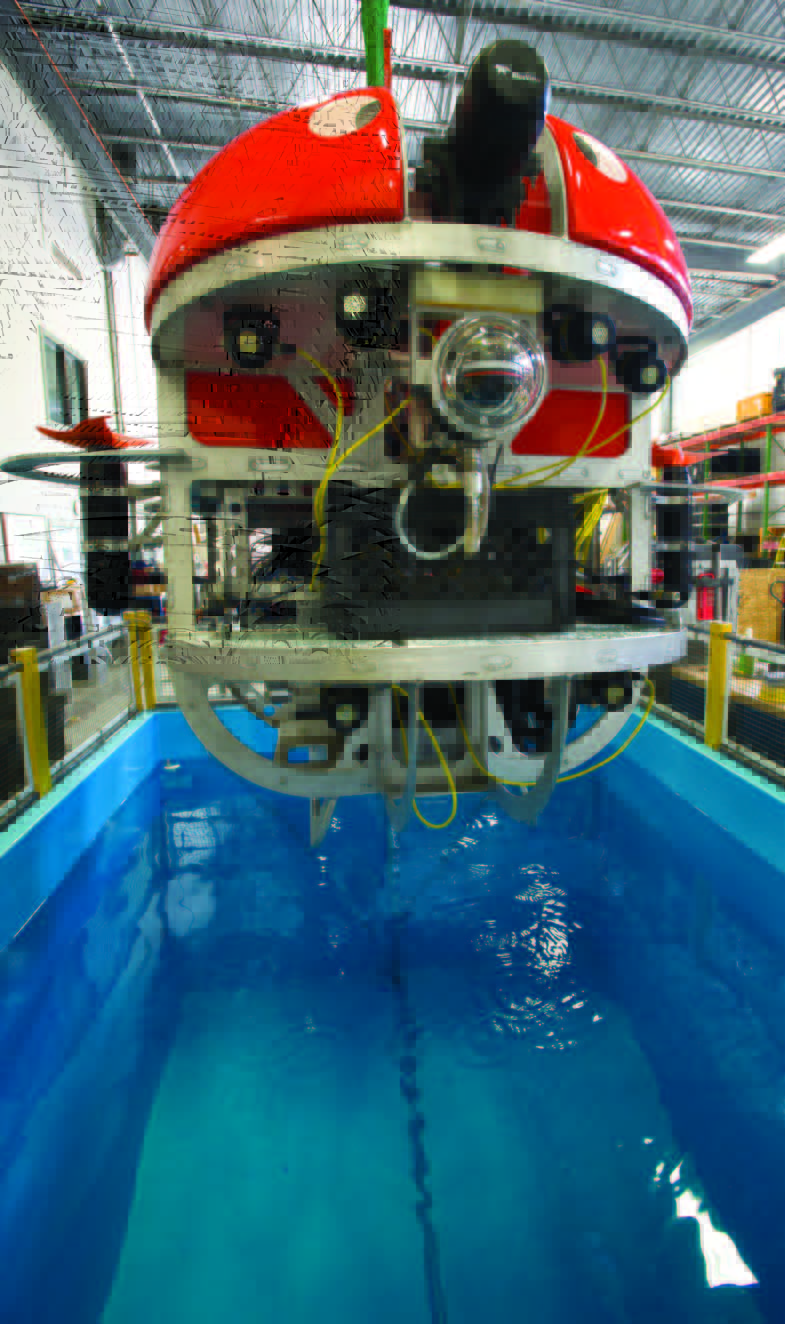 The Nereid Under Ice, the newest vehicle from the Woods Hole Oceanographic Institution’s Deep Submergence Laboratory, undergoes tests in a pool at the Coastal Research Lab.

The first of a family of new hybrid vehicles able to reach under the ice to map the seafloor and travel down to the ocean’s deepest points will soon embark on its inaugural field mission off the coast of Norway.

The first of a family of new hybrid vehicles able to reach under the ice to map the seafloor and travel down to the ocean’s deepest points will soon embark on its inaugural field mission off the coast of Norway.

The Nereid Under Ice will undergo engineering tests in the Fram Strait in May and then will begin a survey of the Arctic ice during the summer. Designed and built by the Woods Hole Oceanographic Institution to travel under the ice caps, the craft can maneuver to melt pools and crevasses and even land against the underside of an ice shelf. Nereid UI will eventually be enhanced so it can collect samples, manipulate objects and place scientific instruments.

While capable of fully autonomous operations, the craft is a hybrid that can be reconfigured at sea into a remotely operated vehicle. The pilot operates the ROV version through a hair-fine cable that enables real time video and two-way communications over distances of as much as 25 km. Should the cable break, the craft reverts to autonomous operation and brings itself home. The vehicle can find its way back because it notes a “home” position or “point zero” when it is launched and records its movements thereafter. The return trip is also aided by acoustic “homing beacons” operating at the original home position, said principal investigator Andrew Bowen in an email response to a question. When the data are downloaded, he added, the engineering team can calculate positions to determine the Nereid’s path during the mission.

The cable is key to exploring regions that could previously be reached only by dropping instruments through holes cut in the frozen surface. At the cable’s core, shielded from seawater by a thin coating of plastic, is a specially designed glass fiber similar to those used by communications companies. The 250 micrometer cable is so light it is nearly neutral in seawater. It floats with the currents as it is rolled out from two canisters, each about the size of a large coffee can, located between the support ship and the Nereid.

Built with support from the National Science Foundation, the system will greatly expand the range of underwater craft operating in ice-covered areas. “Conventionally tethered [remotely operated vehicles] may be restricted in their placement,” the research team wrote in the synopsis of its NSF award, “as the ice-resistant research ships from which they are deployed may be forced to drift with migrating ice over distances of >1 km in a matter of hours while over-the-side operations are underway.”

The tether is also vital to the operation of the second member of the Nereid family—the Nereid 11km, a deep-diving craft being built for the Schmidt Ocean Institute. Once completed, the Nereid 11km will join the Nereus as one of only three vehicles able to operate in the ocean’s hadal depths—from 6,000 meters down to the ocean floor.

The Nereus, the predecessor to the Nereid design and also a Woods Hole vessel, dove into Challenger Deep in the Pacific Ocean’s Mariana Trench in May 2009, successfully reaching the ocean’s deepest known point some 11 km down. To make the trip back from the trench possible, Woods Hole engineers stuffed nearly 1,600 pressure-resistant ceramic spheres into the hulls of the craft’s twin compartments to give it the buoyancy needed to maneuver up to its support ship.

Where the Nereus had spheres for buoyancy the Nereid 11km will use a block of patent-pending foam attached to the ship. Such foam, which is laced with tiny glass spheres for lift, is used in other types of underwater craft. The Nereid’s foam was originally developed for the Deepsea Challenger, the world’s third hadal-capable system, and actually formed part of that vessel’s structure. Explorer James Cameron made a record-breaking solo dive with the vehicle into the Challenger Deep in March 2012.

The improved version of the foam now available uses a different kind of glass spheres and a different type of resin, said Loral O’Hara, a research engineer at Woods Hole and the technical lead for the Nereid 11km project. The way the foam is mixed is key, she said. The spheres must be distributed evenly so the foam does not crack as it contracts and expands during a mission to and from a high-pressure region. O’Hara said her team is talking to two companies for the foam—Engineered Syntactic Systems of Attleboro, Mass., and Ron Allum Deepsea Systems of St Peters New South Wales in Australia. Engineer Ron Allum was part of the Deepsea Challenger team.

The Nereid 11km will be able to use the glass-core tether and three other kinds of communication modes. With the featherweight tether, the craft, like its sister vessel the Nereid IU, can operate at great distances from its support ship, said O’Hara.

Two of the four communication modes allow for piloted control but over shorter distances—one uses a more conventional cable while the other employs pulses of light to direct the vessel. During autonomous operations researchers can communicate acoustically, sending simple commands guiding a preprogrammed mission with pings of sound.

“When you’re pinging it acoustically, and that’s the only information you’re sending back and forth, you don’t have the bandwidth to be able to control the manipulators or do ROV like tasks, explained O’Hara. “The optical coms (communications) give you a high enough bandwidth so that you can actually use the vehicle like an ROV but you are not actually physically connected with it.”

During operations with the optical and the conventional-tether communications the Nereid must stay within about 6,000 meters of its support vehicle. Sea trials are planned next year and the first science mission in 2016.

Better communications, specifically greater bandwidth, is the reason Woods Hole is building a third version of the Nereid vehicle. The Nereid Hybrid Tethered, now in its first phase of development, is also a ROV/Autonomous hybrid. Intended for use from smaller ships, it will utilize a lightweight, reinforced and re-useable tether that—unlike the glass-core tether—is able to provide the ship with additional power.

When built, the vehicle will incorporate advanced 3-dimentional and panoramic imaging systems developed at WHOI, said Bowen. The Nereid Hybrid Tethered team hopes to reach 2,500 meters with the Phase-1 craft and 5,000 meters during Phase 2, which is not yet funded. During the initial tests, set to begin this spring, the team hopes to establish the re-usable tethering scheme as well as “vet the vehicle’s new control system hardware and software,” said Bowen.