When Ingenuity Flies on Mars, It Will Be an Extraplanetary Inertial First. A First for UAVs, Too. - Inside GNSS - Global Navigation Satellite Systems Engineering, Policy, and Design

The first powered, controlled flight on another planet, now re-scheduled for no earlier than April 14, will employ inertial technology to navigate Ingenuity. The brave little craft conducted a high-speed test of its rotors on April 9, but the test ended early when it was trying to shift the flight computer from preflight into flight mode. 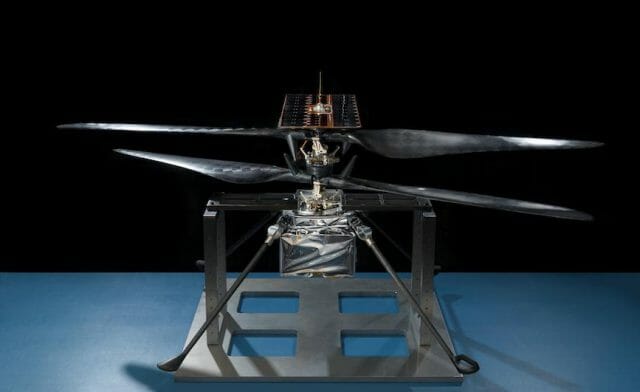 The 4-pound UAV will fly for about 40 seconds, spinning up its two 4-foot blades to rise 10 feet (3 meters) in the ultra-thin Martian air, hover, make a turn, take a photo, and touch back down.

It will have to do it all on its own. Autonomously, in other words. Radio signals from NASA Command take 15 minutes and 27 seconds to travel the 173 million miles (278.4 million kilometers) to Mars. The Perseverance rover helps the helicopter and its mission team on Earth communicate. It will relay flight instructions from NASA’s Jet Propulsion Laboratory in Pasadena, California to Ingenuity. From an overlook 215 feet (65 meters) away, it will observe and record the history-making flight.

The Red Planet’s ultra-thin atmosphere makes it very difficult to generate lift, the force that keeps helicopters aloft. Solar panels soak up enough cold sunlight on Mars to give it energy for one 90-second flight per Mars day, or sol. Even though gravity on Mars is about one-third that of Earth’s, the helicopter must fly with the assistance of an atmosphere whose pressure at the surface is only 1% that of Earth. If successful, engineers will gain invaluable in-flight data at Mars for comparison to the modeling, simulations and tests performed back here on Earth.

After preflight checks, Ingenuity will repeat a blade-wiggle test it accomplished successfully on April 9. If the results check out with the algorithms running the guidance, navigation, and control systems, they will turn on the inertial measurement unit (IMU) and inclinometer. If those in turn pass muster, the helicopter will adjust the pitch of its rotor blades, configuring them so they don’t produce lift during the early portion of the spin-up.

While hovering, the helicopter’s navigation camera and laser altimeter will feed information into the navigation computer to ensure Ingenuity remains not only level, but in the middle of its 33-by-33-foot (10-by-10-meter) airfield – a patch of Martian real estate chosen for its flatness and lack of obstructions.

Ingenuity will conduct up to five flights across a period of 31 Earth days, or 30 sols on Mars. Then, sadly, its pathbreaking life will come to an end, its duty done. Its parent and ride to Mars, the four-wheeled Perseverance rover, will explore the Jezero Crater, the site of a lake 3.9 billion years ago, for two more years, seeking traces of ancient microbial life.

But Ingenuity’s data sets will be invaluable for potential future Mars missions that could enlist next-generation helicopters to add an aerial dimension to the first ventures into an unknown world.

Two cameras on Ingenuity: One color with a horizon-facing view for terrain images and one black-and-white for navigation.

Further sensor information, including the IMU employed, not available at this time. Inside GNSS has inquired.

NASA has invested about $85 million to build the Ingenuity Mars Helicopter, accommodate it on Perseverance, and operate the helicopter on Mars.