Early View on GPS SVN62: As Well As Might Be Expected - Inside GNSS - Global Navigation Satellite Systems Engineering, Policy, and Design 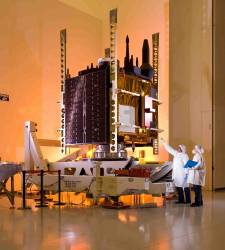 The first GPS IIF satellite (SVN62/PRN25) is on orbit and doing well, despite some well-publicized speculation about higher-the-expected range residuals detected by researchers at the German Aerospace Center (DLR).

The first GPS IIF satellite (SVN62/PRN25) is on orbit and doing well, despite some well-publicized speculation about higher-the-expected range residuals detected by researchers at the German Aerospace Center (DLR).

The 2nd Space Operations Squadron (2SOPS) and the Boeing team at Schriever Air Force Base, Colorado, have completed the 30-day launch and early orbit (LEO) contractor/government checkout portion of the space vehicle (SV) on-orbit testing and are in the second (60-day) phase of on-orbit testing. Boeing developed and built the Block IIF generation of GPS satellites, which notably carries the first operational L5 civil signal payload.

Civil signal monitoring is an integral part of the GPS Wing’s L-Band Signal-in-Space (SIS) performance assessment. The GPS Wing, in cooperation with the Federal Aviation Administration (FAA) and U.S. Coast Guard Navigation Center (NAVCEN), developed a small set of CNAV test vectors which will be broadcasted during this performance assessment. The CNAV Test Vectors are available for download here. If civil users have questions regarding the test vectors or their use, they should be directed to NAVCEN.

The IIF-1 mission was planned according to a drift-to-station trajectory plan, which best accommodates the 90-day on-orbit checkout of the first of the IIFs.

From a maneuver perspective, this trajectory plan called for a slow westward drift from the direct-inject booster separation orbit to a final station arrival into the B2 GPS plane/slot on or around August 1. Following the May 27 launch, a drift rate adjust maneuver was accomplished on May 30 to correct for orbit injection dispersions (deviations from the planned spacecraft inclination or velocity that are common during the on-orbit positioning of satellites).

A series of four drift orbit correction maneuvers (already executed) and four station arrival maneuvers (of which two have already been executed) are designed to enable the satellite to drift slowly into its final position, providing for good high elevation passes during the drift where controllers can accomplish RF characterization of the satellite’s signals.

From a GPS mission perspective, the navigation payload has been initialized and the cesium atomic frequency standard, turned on.  The Block IIF generation of satellites re-introduces dual-clock technology into the GPS space segment. GPS IIR SVs only had rubidium frequency standards (RAFS) on board.

GPS navigation performance resulting from the CAFS-based timing was evaluated and found to be close to the specified values.  The onboard clock was switched to the first of two RAFS in mid-July, and early indications are that the rubidium standard is providing nominal performance as well.

Bottom line on IIF clock performance, according to Boeing engineers supporting the IIF orbit mission: CAFS performance was good, even though the SV was launched into eclipse season. With regard to RAFS performance, controllers will probably wait a short amount of time to allow for better settling of normal early life transients.

Long-term age-of-data performance is scheduled to be assessed over the August 6–20 period.  During that time, no maneuver or clock adjustments are planned.