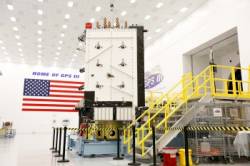 A Raytheon executive said that the company expects to deliver the Block O Launch and Checkout System to the U.S. Air Force this fall as part of the GPS Next Generation Operational Control System (OCX).

In addition, the company completed a baseline procedure to recertify the troubled OCX program, which was approved by the U.S. Air Force, at the end of March, said Bill Sullivan, Raytheon vice president and program manager for GPS OCX, at the recent 33rd annual Space Symposium meeting in Colorado Springs, Colorado.

A Raytheon executive said that the company expects to deliver the Block O Launch and Checkout System to the U.S. Air Force this fall as part of the GPS Next Generation Operational Control System (OCX).

In addition, the company completed a baseline procedure to recertify the troubled OCX program, which was approved by the U.S. Air Force, at the end of March, said Bill Sullivan, Raytheon vice president and program manager for GPS OCX, at the recent 33rd annual Space Symposium meeting in Colorado Springs, Colorado.

OCX’s development is delivered in "blocks," with Block 0 comprising the Launch and Checkout System to take GPS III satellites into early orbit. Block 1 is built on Block 0 and delivers the full OCX capability, which allows the Air Force to transition from its current GPS ground controls to the modernized and secure GPS OCX master control station.

“All coding is complete for Block O and we recently completed factory qualification with 98 percent of requirements passed by Raytheon —under the guidance of the Air Force contract terms,” Sullivan said. “It may be in late September or early October.”

Block O was originally deployed to Schriever Air Force Base, Colorado, in 2015, Sullivan said. “It’s undergoing site acceptance testing. We’re about ready to wrap [testing] up and deliver,” he said.

Sullivan said that Block O will fully implement the Defense Department’s 8500 cyber security standard without any deviation. “There are guidelines, driven out of the 8500 standard, such as encrypting every code. We have satisfied 77 percent of the requirements, with the remaining 23 with the Block 1 delivery,” he said. “On Block 1, the development is ongoing. We have coding completed on six of seven iterations. The final iteration, known as 1.7, will be completed in late 2018.”

It has been a long road for the OCX program to get to a delivery. As Inside GNSS reported, then Secretary of the Air Force Deborah Lee James declared a critical Nunn-McCurdy breach on OCX on June 30, 2016. The breach meant that OCX would surpass, by at least 25 percent, the program’s estimated cost.

The breach put the OCX program on a path to automatic cancellation. To prevent the program from shutting down on that date, Secretary of Defense Ashton Carter had to certify to Congress the need for the programs and show how it was going to be brought into line.

Frank Kendall, the under secretary of defense for acquisition, technology, and logistics certified the program to Congress on behalf of Carter on October 12, 2016, Inside GNSS reported.

The program continues to be under scrutiny as Sullivan said he briefs the highest levels in his company as to its status. “GPS OCX has the highest visibility in the company. [Raytheon] is applying the key resources to the program,” he said.

Sullivan also said the last office of the secretary of defense program review was in January. “There is one coming up in a couple of weeks here in Colorado,” he added.

“Going back to before I joined the program, we identified deficiencies and a series of corrective actions, jointly developed by us and the Air Force, were defined and put into place to include ensuring systems engineering was defined before you wrote the code. We then added automation into the system. Those started being implemented in the 2015-2016 timeframe.”

Sullivan said the company achieved every milestone for correcting program deficiencies last year. “That means, based on the established plan, those corrective actions put in place are working. Block O is an example,” he said.

Total program cost for OCX is now estimated to be $5.46 billion. That’s up from the $5.3 billion Inside GNSS reported in April 2016. Counting all contract options, the original estimated cost for the program was $1.5 billion.

About 1,000 people are working on OCX, primarily in Raytheon’s Aurora, Colorado, facility, Sullivan said. However, some of the workers are from Harris Corp., based out of New Jersey, who are working on OCX monitoring receivers in their final qualifications, he said.

As part of the certification process, Sullivan said that Raytheon is implementing, with the Air Force, a new software process called Development Operations, or Dev Ops. “It’s a commercial best practice that is assisted by the Air Force. [It helps us] determine how fast we can do software testing and get results,” he said. “It took two weeks to build a unit of software and get it out. [With Dev Ops], we have shortened that cycle to three hours as all software developers can get access to the data at the same time.”

Sullivan said that the Air Force has authorized Raytheon to participate in a study, with Lockheed Martin, to transition from the stopgap Contingency Operations, or COps, ground control system to OCX.  “After delivery [of OCX] in September 2020, the Air Force has a period of time to switch off the legacy system and turn on Block 1,” he said.

Lockheed Martin, which won a $96 million Air Force contract last year to provide COps services and supplies, said that the system’s modifications allow the AEP to support the new GPS Block III satellites by enabling them to perform their positioning, navigation and timing mission, once they are launched.

Issues surrounding a subcontractor’s failure to test a GPS III ceramic capacitor have been resolved, said Lockheed Martin spokesman Chip Eschenfelder. As Inside GNSS reported earlier, the first GPS III satellite’s delivery, originally scheduled for August 2016, was delayed for four months because of the ceramic capacitor, provided by Harris Corp., which had not been properly qualified per the program’s approved parts control plan.

GPS III Space vehicle (SV 01) has completed factory functional qualification testing and has been placed in storage since Feb. 27. SV 02 will go through space vehicle integration forecast and environmental testing in May.

After other testing, the GPS III satellites go into a large chamber, owned by the Air Force, which simulates space conditions with extreme temperatures. The simulation artificially creates near and far side Earth solar temperatures.

In the same building near the clean room, in the Collaborative Human Immersive Laboratory, Lockheed Martin is designing products with 3D glasses and virtual reality goggles. With goggles, technicians can “lift” a space craft’s engine parts to see where they go and other tasks in a virtual reality environment.