Three different low-cost sensor integrations, covering vehicle navigation in a range of environments, were explored and explained in the February webinar, “Automotive-Grade GNSS + Inertial for Robust Navigation.” The full webinar, slides and audio, is available for download now.

Attendees learned about the options available under both GNSS-centric and inertial-centric paradigms. In both realms, low-cost sensors now accomplish so much more than they ever could before.

The webinar zoomed in close on three integrations:

• via sensor-agnostic self-contained software that performs tight coupling of carrier-phase GNSS with inertial measurements, a vehicle motion model with software-based multipath mitigation and without connecting to vehicle sensors; 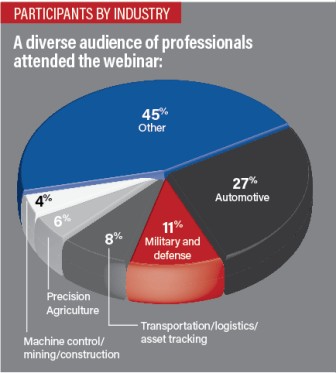 Low-cost sensors can meet requirements for map-matching, telematics and fleet-vehicle tracking, functioning in challenging environments such as urban canyons, tunnels and parking garages. A consistent and reliable positioning on the meter level, capable of withstanding 5 to 10-minute outages, answers this growing need.

The expert panel guided the audience through the intricacies of GNSS-inertial integration from three varying yet complementary vantage points:

• 3D positioning in parking garage with no GNSS an automotive dead reckoning solution employing tightly coupled GNSS, MEMS accelerometers and gyros, and various vehicle sensors, that can continue to operate without GNSS;

• a constrained inertial system that provides a full solution in a completely denied GNSS environment: underground! 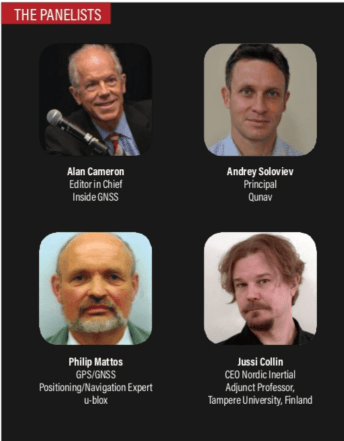 Andrey Soloviev, Ph.D., is a principal at QuNav. His research and development interests focus on sensor-fusion and signal-processing implementations for GNSS-degraded and GNSS-denied applications. He is a recipient of the Institute of Navigation (ION) Early Achievement Award and the RTCA William Jackson Award.

Philip Mattos, PhD., is a positioning technology expert for u-blox, with degrees in electrical engineering from Cambridge and Bristol. He designed hardware and software for GPS, Galileo, GLONASS and BeiDou systems and served on Galileo advisory groups for the European Commission. He worked as technical director and fellow applying GNSS knowledge to chipsets for satnavs, cars, asset tracking and more, for over 25 years.

Jussi Collin is CEO of Nordic Inertial (JC Inertial Oy) and adjunct professor at Tampere University. He received M.Sc. and Dr.Tech. degrees from Tampere University of Technology, Finland, specializing in inertial navigation algorithms. His research interests are in modern machine learning methods and their industrial applications in the field of inertial sensing.

Andrey Soloviev set the stage for technical discussion of low-cost GNSS and inertial sensors by describing how much their performance has improved in recent years, to the extent that they can now provide meaningful navigation in a standalone format, without integration into the vehicle’s CAN bus system. He cited in particular vehicle tracking in GNSS-challenged environments such as urban canyons, tunnels and parking garages.

He explored the details of a self-contained, software-based, sensor-agnostic solution using consumer-grade GNSS and MEMS sensors. This GNSS/inertial vehicular engine (GIVE) tightly couples carrier-phase GNSS with inertial measurements and the vehicle motion model.

“We apply specific measures at the measurement screening level to mitigate the influence of multipath on overall navigation performance. This is pretty significant, particularly when we’re talking about urban canyons.”

Driving two loops inside an enclosed parking garage, with a 5-minute GNSS outage, the GIVE system consistently kept the tracking data on the correct path (Figure 1). An even greater challenge came from a tunnel on Lower Wacker Drive in Chicago—2.2 miles long and a 5- to 7-minute complete GNSS outage! Again, tracking data showed consistent and accurate performance (Figure 2). 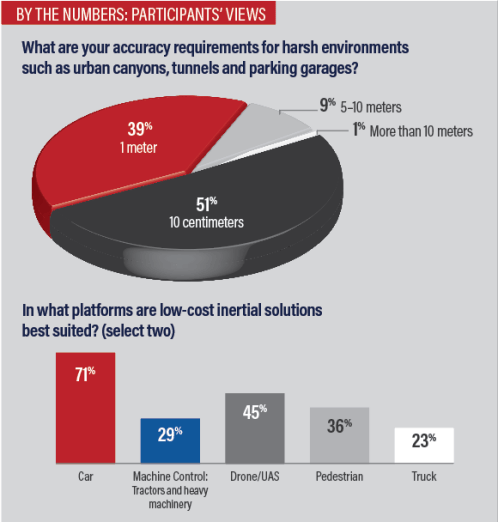 A MARKET IN THE MIDDLE

He displayed a diagram giving an overview of main vehicle applications (Figure 3). “Traditionally, we’ve had very, very precise GNSS of the surveying type. At the other end we have the standard applications in the 3-meter area. What’s emerging is somewhere in between. We need to offer products for markets that want 10 centimeters, or that want 1 meter, to various levels of percentage, but additionally, to certain availability percentages. So when we go into a more difficult environment, what percentage of the time can we still achieve our 1-meter requirement, or in a different case our 10-cm requirement?”

He narrated test results tracking a drive through a 2-kilometer tunnel, going from full GNSS to no GNSS, relying entirely on dead reckoning, then emerging to full signal availability. How far did the solution drift? He displayed single-band and multi-band GNSS results, with and without SBAS, with and without correction services. 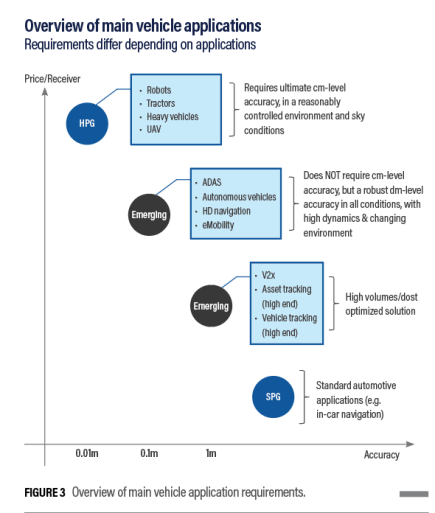 Jussi Collin introduced the technique and specific applicabilities of wheel-mounted inertial navigation, staying at GNSS-level precision without aiding. Giving the technical underpinning, he showed results of the technique in completely GNSS-denied environments, underground.

“What we see in the future is using this method, we started with the wheel but we can extend it for robot manipulators or excavator arms (Figure 4). We can predict where the inertial unit is, predict its motion and give feedback to the filter. It appears by the initial tests that we will be very accurate on this and we know how the vehicle is moving we also know where it’s pointing, and where it’s picking up something. This looks like a very promising extension of inertial to machine control.”

To learn more or inquire about an evaluation kit, visit QuNav.com. 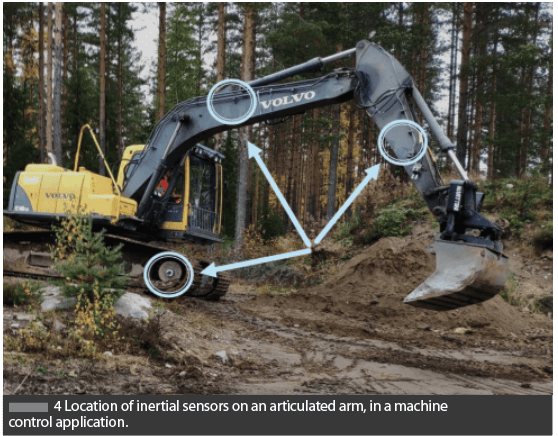