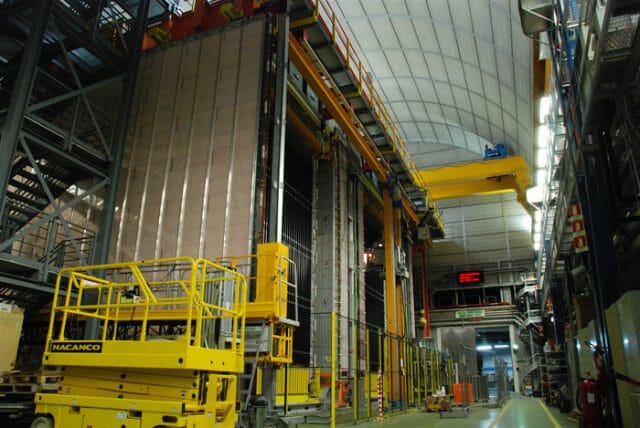 [Updated March 26, 2012] Six experts debatd the exciting – and controversial – claims of faster-than-light neutrinos from physicists who used the Large Hadron Collider (LHC), the world’s largest particle accelerator, in a European experiment that called into question the basics of modern physics.

[Updated March 26, 2012] Six experts debatd the exciting – and controversial – claims of faster-than-light neutrinos from physicists who used the Large Hadron Collider (LHC), the world’s largest particle accelerator, in a European experiment that called into question the basics of modern physics.

The 2012 Isaac Asimov Memorial debate, Faster Than the Speed of Light, has been recorded and is available at
http://www.youtube.com/watch?v=5qlLW60wOjo . It is sponsored by the American Museum of Natural History in New York.

GNSS timing was used in the "OPERA" experiment (Oscillation Project with Emulsion-tRacking Apparatus). It began in 2006 to study the rare transformation (oscillation) of muon neutrinos into tau neutrinos. Researchers observed a neutrino beam from the Super Proton Synchrotron (SPS) particle accelerator at the European Organization for Nuclear Research (CERN) facility near Geneva, Switzerland, to Italy’s National Institute for Nuclear Physics (INFN) Gran Sasso National Laboratory (LNGS) more than 450 miles away.

The result of more than 15,000 neutrino events led the researchers to claim that neutrinos can travel at a velocity 20 parts per million greater than the speed of light. For the last several months, this finding has led to checking and re-checking, dissension, and a host of  alternate theories – including the relativistic motion of GNSS clocks.

On March 15, another group of researchers at the same laboratory published a paper that contravened the OPERA experiment, saying their work showed that neutrinos behaved in a way "compatible with the simultaneous arrival of all events with equal speed, the one of light."

Chris Hegarty, a MITRE Corporation director, Inside GNSS author and GPS signal spectrum expert is one of the debaters. He said,  "I’ve been asked to speak to the use of GPS in this experiment, whereas the other five participants are physicists — including a Nobel-prize
winner — in the debate."

The debate moderator is Hayden Planetarium Director Neil deGrasse Tyson. In addition to Hegarty, the panelists are:

David Cline, University of California-Los Angeles astroparticle physicist. He was one of the three scientists who proposed modifying CERN’s single beam accelerator into a two-beam collider, eventually resulting to the discovery of W and Z bosuns in 1983.

Gian Giudice, a theoretical physicist at CERN and the author of the 2010 book, A Zeptospace Odyssey – A Journey into the Physics of the LHC

Sheldon Glashow, Boston University, received the 2004 Nobel Prize in Physics with colleagues Abdus Salam and Steven Weinberg for their work on the unification of the electromagnetic and weak-nuclear forces. He is the co-author of an October paper in Physical Review Letters that questioned some of the OPERA findings.

Laura Patrizii, a member of the OPERA collaboration and a leader of the Bologna research group. She is a physicist at the University of Bologna. Patrizii is one of several dozen coauthors and one of the endorsers of the paper on the OPERA findings.