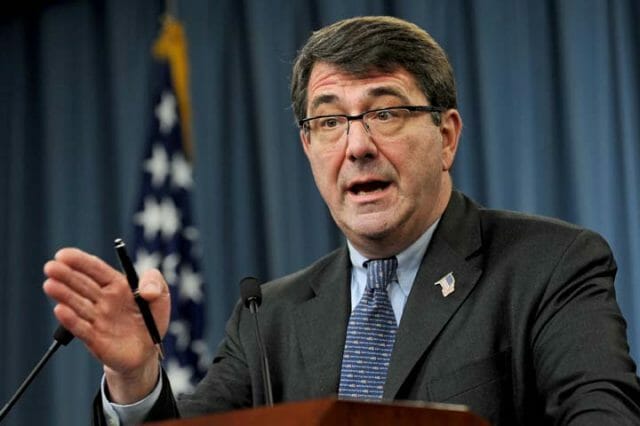 Ashton Carter, the new U.S. Secretary of Defense has been making clear he supports moving past GPS to a disbursed network based on microelectromechanical systems or MEMS for position, navigation, and timing (PNT) information.

Carter, who was tapped to lead the Pentagon in February, appears to have first publicly floated the idea a year ago, about six months after leaving the Department of Defense (DoD), where he had served most recently as deputy secretary of defense, a role that included cochairing the interdepartmental National Space-Based PNT Executive Committee.

Ashton Carter, the new U.S. Secretary of Defense has been making clear he supports moving past GPS to a disbursed network based on microelectromechanical systems or MEMS for position, navigation, and timing (PNT) information.

Carter, who was tapped to lead the Pentagon in February, appears to have first publicly floated the idea a year ago, about six months after leaving the Department of Defense (DoD), where he had served most recently as deputy secretary of defense, a role that included cochairing the interdepartmental National Space-Based PNT Executive Committee.

“I hate GPS,” Carter said during a wide-ranging conversation about innovation in June 2014. “The idea that we are all hooked to a satellite — formerly bought by me to my great resentment — in a semi-synchronous orbit that that doesn’t work in certain circumstances, does not work indoors or in valleys in Afghanistan, is ridiculous.” His reference to buying GPS satellites refers to a previous stint (April 2009–October 2011) as undersecretary of defense for acquisition, technology, and logistics.

Speaking on the podcast a16z, which is supported by the Silicon Valley venture capital firm Andreessen Horowitz, Carter said he thought the constellation’s future was limited, and that in a couple of decades PNT information would be obtainable from highly capable computer chips installed in products to support the Internet of Things. The resulting network, he said, would be more resistant to jamming and disruption.

“I think that 20 years from now we won’t be buying GPS satellites,” he asserted. ‘Twenty years from now everything you have that is manufactured for you, including your phone, will have on the chip a clock, a gyro and an accelerometer. It’ll be set the moment it’s manufactured and henceforth it will forever know what time it is, where it is, what its spatial orientation is. And it will never need a satellite.”

Carter underscored that view on April 23 when he gave the Drell Lecture at Stanford Graduate School of Business in Stanford, Calif. In a talk largely about the need for cooperation between technology companies and DoD to help mitigate technology-based risks, he cited PNT as an area where defense experts were “looking beyond GPS” for “alternatives for military use that are more resilient and less vulnerable.”

“We’ll push, for example, the performance envelope in timing and navigation technology by harnessing Nobel Prize-winning physics research that uses lasers to cool atoms,” Carter said. “The result would be a GPS of things — akin to the Internet of Things — where objects, including our military systems, keep track of their position, orientation, and time from the moment they are created with no need for updates from satellites.”

Work on such a MEMS-based PNT system was already underway, he said the next day in another a16z interview. MEMS chips could go into weapons as well as other military receivers, he said. Bombs could be able to guide themselves and not have to worry about GPS jamming.

Carter told the Stanford audience that DoD would continue to support the GPS satellites “because of all the commercial applications as well as military applications.” He asserted during the a16z interview, however, that the MEMS approach would also be good for civil users.

“Anywhere there is now a GPS receiver on a vehicle, on your phone — you don’t need to be receiving satellite signals.”

GPS experts, however, have their doubts — with one deeming the concept “misguided.”

“Anything is possible I suppose,” said another expert, although they added it didn’t seem realistic to achieve the necessary breakthroughs “in any reasonable time frame like 10 or 20 years.”

MEMS will have utility for some systems, said another specialist, although it was not something that would be needed for all applications because of the cost and availability of signals from space — not just from the GPS constellation but from all the other GNSS systems, too.

Operating without space-based PNT “is not going to happen,” asserted another PNT source, like the other GNSS experts who spoke not for attribution due to the sensitivity of the subject. "But that doesn’t mean individual users who believe they will be in critical situations — whether it’s in banking, communications, or war fighting — aren’t going to take advantage of technology to ensure that they have that common PNT information when they don’t have available from space.

The real value of PNT MEMS, the experts suggested, would be in using MEMS as a bridge when reliable GNSS signals are unavailable. Marrying GPS with inertial systems is particularly powerful, one specialist said.

“All inertial systems drift,” the expert explained, “even the most expensive ones drift over time. Particularly the MEMS gyros, the little tiny, micro-sized, small-scale clocks and gyros, tend to drift much more rapidly than very expensive ones — but they all drift.

“What GPS does is it keeps them locked down, it controls the drift, eliminates the drift because they are updated all the time with the GPS signal. Without that signal they would continue to drift until ultimately they get to some degree of imprecision where they are not useful anymore.”