“I’ve been a revolutionist for 47 years,” Brad Parkinson began a recent invited lecture at Google, “with this stealthy revolution. GPS is indeed a stealthy revolution.” In his lecture “GPS and Humanity” he described how GPS has “stealthily” crept into the fabric of global society and created dependencies that did not exist before.

Parkinson related how was GPS created, and the essential roles that several different technologies played in its success, among them electrical engineering, computer science and “all disciplines of engineering [that] were involved.” From its origins to the various ways it holds crucial processes and infrastructure together to its $1.4 trillion economic impact, the “father of GPS” built to the system’s current vulnerable state: the “existential threat” posed by a possible re-allocation of a nearby band to higher power.

The hour-long online video of the lecture includes a question-and-answer session with Google engineers at the end. 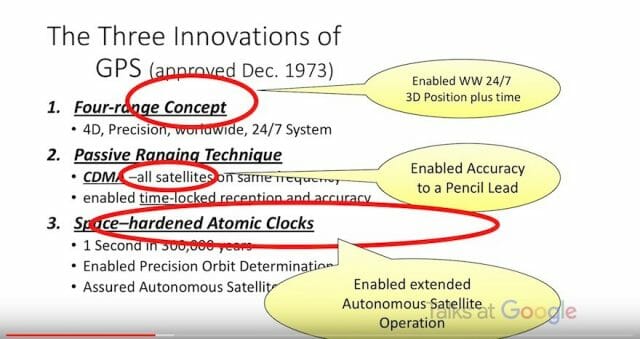 “We’ve come a long way from the inception of GPS. Today, location is often taken for granted,” commented Steve Malkos, “but that’s true towards every mainstream technology. It’s absolutely remarkable how far the technology has evolved.” Malkos is technical program manager in the Android Location and Context Group at Google.

“From receivers that were as big as backpacks,” Malkos continued, “to tiny chipsets supporting multi constellation dual band GNSS receivers in smart phones with antennas that are etched into the body of cell phones — it’s really an amazing technology.”

“I’ve had the privilege to work on GPS in phones since before “smart” appeared in front of them.  It was a privilege and honor to have Brad give this candid and open talk and I hope you enjoy it as much as we did!”

Talks at Google partnered with the Android Context Team to produce the keynote discussion, GPS for Humanity, presented by Dr. Bradford Parkinson, also fondly known as the father of GPS.