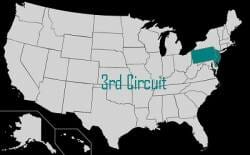 A Third Circuit U.S. Court of Appeals recent decision to suppress evidence in a criminal case obtained by placing a GPS-based tracking unit on a suspect’s van appears to strengthen the requirement for police to obtain warrants before taking such measures.

A Third Circuit U.S. Court of Appeals recent decision to suppress evidence in a criminal case obtained by placing a GPS-based tracking unit on a suspect’s van appears to strengthen the requirement for police to obtain warrants before taking such measures.

Written by Judge Joseph A. Greenaway, Jr., the decision in the case of three Maryland brothers arrested in connection with burglaries of local pharmacies could put the issue back in the lap of the U.S. Supreme Court, which only last year address the issue of GPS-aided tracking in United States v. Jones.

In the Jones case, the Supreme Court unanimously overturned the conviction of a suspected drug dealer based on evidence obtained by without a valid warrant as contravening the U.S. Constitution’s Fourth Amendment protection against searches of persons or property without a warrant. But the justices split five to four over the legal principle on which their decision was based. The majority argued more narrow decision that the search represented a trespass while the others concluded that the 28 days of GPS-aided surveillance violated the suspect’s “reasonable expectations of privacy.”

However, the case decided by the Third Circuit Court located in Philadelphia  involved only a short-term surveillance and law enforcement authorities’ assertion that they acted on probable cause in “good faith” based on previous decisions by other courts.

“Among the issues that Jones left open,” the Third Circuit justices said in their opinon, “was whether warrantless use of GPS devices would be ‘reasonable’ — and thus lawful — under the Fourth Amendment [where] officers ha[ve] reasonable suspicion, and indeed probable cause” to execute such searches.”

In a split decision — two judges in favor, one dissenting — the court ruled definitively and broadly against police use of GPS technology without a warrant.

The court appeared to distinguish between a “search” and ongoing “surveillance” designed to discover evidence of a crime, deciding that the Maryland case represented the latter. Even though the police acted soon after the tracking unit was placed on the suspect’s vehicle, the judges said that police had no idea how long it would actually remain in place before they had cause to stop and search the vehicle.

“We are hard pressed to say, therefore, that the police can — without warrant or probable cause — embark on a lengthy program of remote electronic surveillance that requires almost no law enforcement resources and physically intrudes upon an ordinary citizen’s private property,” the judges wrote in their opinion. “Consequently, we hold that — absent some highly specific circumstances not present in this case — the police cannot justify a warrantless GPS search with reasonable suspicion alone.”

Attaching and monitoring a “GPS tracker” is different than a specific search for evidence, the judges wrote. “It creates a continuous police presence for the purpose of discovering evidence that may come into existence and/or be placed within the vehicle at some point in the future.”

The decision also concluded that GPS technology is different in “kind, not degree” from another form of electronic tracking involving radio transmitters — so-called beepers — and, therefore, Fourth Amendment–related court rulings on evidence gathered by the latter means did not apply to GPS-related searches.

“In contrast to GPS trackers, beepers do not independently ascertain their location — they only broadcast a signal that the police can then follow via a corresponding receiver,” the majority argued. “Moreover, beeper signals are range-limited: if the police move far enough away from the beeper, they will be unable to receive the signal that the unit broadcasts. At bottom, then, beepers are mere aids for police officers already performing surveillance of a target vehicle. Unlike GPS trackers, beepers require that the police expend resources — time and manpower — to physically follow a target vehicle.”

In a later footnote, the justices added, “Any time technology shifts in this way, courts should expect that law enforcement will tread lightly and will refrain from reasoning by (potentially ill-fitting) analogy.”