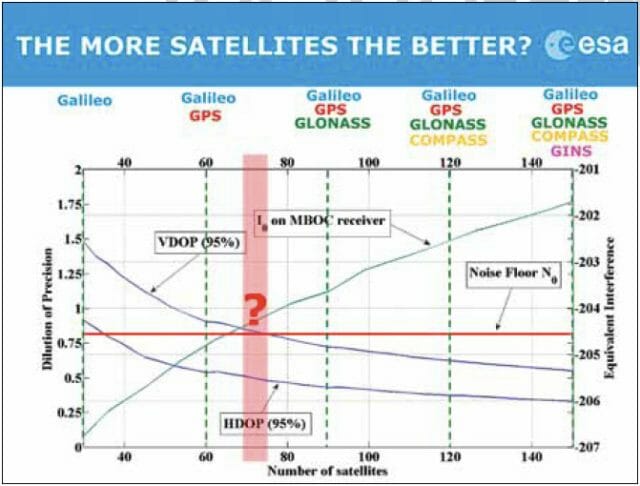 In the early stages of developing space-based radionavigation, the spectrum compactness of ranging signals was not proclaimed among the material priorities. Conventional bi-phase shift keying (BPSK) modulations, although they consume a rather large amount of spectrum, were adopted as the basis for both GPS and GLONASS signals.

In the early stages of developing space-based radionavigation, the spectrum compactness of ranging signals was not proclaimed among the material priorities. Conventional bi-phase shift keying (BPSK) modulations, although they consume a rather large amount of spectrum, were adopted as the basis for both GPS and GLONASS signals.

Later developments, such as the modernized civil GPS L1-band (L1C) and military (M-code) signals as well as some signals of Galileo and Compass/BeiDou-2, modified the plain BPSK a bit to take a form of binary offset carrier (BOC) modulation, which again is in no way bandwidth-efficient.

In the meantime, scenarios arose in which the penetration of GNSS signals into neighboring bands allocated to other systems appears to be tangibly harmful. One example of this sort is the collision between L1 GLONASS signals and an International Telecommunication Union (ITU) requirement to keep quite a low level of any side power flux within the radio astronomy window at 1610.6–1613.8 MHz.

The trouble here is that the power amplifier of a standard satellite transmitter does not tolerate amplitude modulation; so, signal prefiltering is not an option. Currently the attempts are being undertaken to solve the problem by post-amplifier band rejection, compromising the transmitter energy output and mass-dimension characteristics.

Similar challenges may be expected all the more in the future with the anticipated advances of satellite radionavigation into new frequency bands, e.g. C-band. Attention to this possibility has recently been drawn in the articles by J.A. Avila-Rodriguez et alia and A. Schmitz-Peiffer et alia (see Additional Resources).

A radical way to organize navigation signals with a minimum out-of-band emission would be to replace traditional BPSK with some continuous-phase modulation (CPM), such as minimal shift keying (MSK) or one of its numerous enhanced analogs. Smooth changes in the complex amplitude of a CPM signal result in a very compact spectrum combined with the absence of amplitude modulation.

Owing to this characteristic, employing a CPM design in future GNSS signals could make it unnecessary to apply any post-amplifier rejection within the forbidden frequency range, or, at least, if a stop-band filter cannot be completely excluded, its implementation may turn out not that demanding. Similar ideas have already been put forward in the articles mentioned earlier and also in the article by V. Ipatov and B. Shebshaevich referenced in Additional Resources.

Of course, the bandwidth economy inherent to CPM is obtained at the cost of potentially compromising some other performance characteristics. Indeed, removal of high-frequency spectral components principally reduces root-mean-square signal bandwidth, thereby increasing the theoretically achievable noise error of the signal time-of-arrival estimate. Equally, one can expect degradation of multipath resistance again due to spectrum concentration within the narrower band.

In the sections to follow, however, we demonstrate that allowing for a limited bandwidth of the receiver frequency-selective circuits with preference to CPM modulation rather than BPSK often means either insignificant deterioration of these performance characteristics or even their improvement.

One more disputable issue is a way of aggregating two subsignals differing in bandwidth: narrowband (or civil) and wideband ones, into a united signal free of amplitude modulation. Creating this kind of combined signal does not present any difficulty if the modulation is BPSK or BOC, as takes place in GPS, Galileo, GLONASS, and other systems, where each of the subsignals modulates its own quadrature carrier component.

Replacement of BPSK with the CPM means that the ranging signal elements — chips — are not rectangular any more, and each of subsignals becomes amplitude-modulated. In the next section we describe how to construct subsignal chips in order to come to the amplitude-modulation-free overall signal incorporating both subsignals.

As long as various versions of spectrally efficient modulation exist and our goal is just to uncover their common potential merits stemming from the complex amplitude continuity, we can reasonably limit ourselves here to the simplest CPM mode, namely MSK.

Further complications of CPM, particularly making continuous phase derivatives along with the current phase itself, can lead to even greater spectrum compactness.

Possible Structure of an MSK-Based Satellite Signal
As is well known (see, for example, the textbooks by J. Proakis or B. Sklar cited in Additional Resources), the MSK is just a modified version of the offset quadrature phase shift keying (OQPSK). In conventional OQPSK, streams of rectangular elementary symbols (chips in our case) of two quadrature branches are time-shifted to each other by a half symbol length. To convert OQPSK to MSK we only need to replace a rectangular chip with one having the shape of sine half-wave of the same duration.

Due to a mutual time shift of quadrature streams, a change of chip polarity caused by ranging coding in one branch occurs when the other branch chip passes its maximum. As a result of the smoothness of a half-sine chip, the overall signal comprising both branches has no phase jumps. Moreover, the half-sine chip shape provides amplitude constancy of the overall signal.

To roughly assess the spectral saving of a modulation and its share of out-of-band emissions, one can resort to the 99 percent bandwidth, W0.99, which is a frequency span containing 99 percent of the total emitted signal power. For BPSK with chip length Δ W0.99 ≈ 20/Δ, which is 10 times larger compared to the traditional figure 2/Δ, estimating the bandwidth by the space between first spectral zeros. In contrast to this, for an MSK modulation with the same chip length W0.99 ≈ 2.4/Δ, meaning more than an eightfold economy in the bandwidth actually occupied.

Let us base our further consideration on the premise that a future GNSS signal is to succeed the existing one in combining two (public and special) accuracy scales, meaning that it has to contain both narrowband (long-chip) and wideband (short-chip) components. At the same time, we can readily see from the previous discussion that, in order to implement an MSK discrete signal, the chips in both quadrature branches should be half-sines of the identical duration.

The latter option corresponds to the implementation of the BOC-modulation mode through MSK, which can be used to partly separate civil and special components spectra.

To come to the resulting MSK signal the two components constructed in this way should just be used in quadrature, that is, modulating in phase (I) and in quadrature (Q) carrier waves. In so doing, one of them has to be in a preliminary fashion half-microchip–shifted against the second, as is shown in Figure 2 (above right) for the case nn = 4, nw = 1.

An important comment to the suggested construction of a narrowband component:  the simplest low-cost receiver has no need to reproduce the exact shape of chip of Figure 1b in a correlator reference. Instead, a conventional rectangular chip of length Δn could be used at the price of an energy loss of π2/8, that is, about 0.9 decibel.

In other words, if some day the GPS civil signal was switched to the proposed MSK modulation mode without changing ranging code, all existing commercial receivers would survive although suffering from the signal-to-noise (SNR) penalty as described.

Potential Accuracy of MSK Ranging
Our suggested signal gains spectral compactness compared to legacy modulations as a result of the smoothness of MSK chip. Theoretically, we pay for this compaction in the form of a degradation of the potential measurement accuracy of pseudoranges or, equivalently, the time of arrival (TOA), τ, of the satellite ranging code against the local time scale.

In practical calculations, however, we should allow for the finite bandwidth of both the transmitter and receiver and, if some realistic assumptions are made on this account, the accuracy of time measurement of the proposed signals appears to be no worse than with the existing ones.

Multipath Resistance
The issue of multipath resistance is among the most critical in designing GNSS signals and, again, at first glance it might seem that multipath performance of a smoothed chip is poorer than with a rectangular one. Nevertheless, in line with the previous section when the real receiver frequency selectivity is taken into consideration, an MSK-based signal appears completely competitive with the legacy ones.

In numerous sources, assessment of the multipath influence is demonstrated employing a graph of the code-tracking error envelope. Curves thus built depend critically on the discriminator type, strobe spacing, and strobe length, and for every possible chip shape these factors should be adjusted individually to optimize performance.

In this section we will follow an alternative approach that concentrates on the potential accuracy of measuring TOA of the line-of-sight signal distorted by multipath interference. By this means, we will find out to what extent the multipath is destructive in principle when applied to both traditional signals and our proposed modulation technique.

Conclusions
The following statements may briefly summarize our discussion: