The European GNSS Agency (GSA) has just issued its sixth annual GNSS Market Report, a booklet that comprehensively runs down the major market sectors and gives gratifying growth figures for all of them.  This is not news, strictly speaking.  This is more of the same that we have seen over the last two decades, the last six years of which have been quantified in the sturdy GSA Market Reports.

Such growth would warm the heart of any investor, and indeed most of the report reads like an enthusiastic mutual fund prospectus: stability, long life expectancy, regular and occasionally spectacular growth, etc., etc., etc. For instance, “Global GNSS downstream market revenue from both devices and services will grow from €150 billion in 2019 to €325 billion in 2029.” Furthermore, “The global installed base of GNSS devices in use will increase from 6.4 billion in 2019 to 9.6 billion in 2029.”

And the GSA would not be the GSA without such findings as “In 2017, European companies accounted for an estimated 27% of the global GNSS market.” And “Connectivity becomes more reliable with Galileo.” Further, but far from finally, “Galileo provides unique differentiators to the geomatics industry.”

Still, the Report remains the best single compilation of statistics and an intelligent overview/summary of the marketplace, and as such is a valuable read for anyone in the field. Each segment gets a thoughtful, several-page treatment, with more than enough revenue figures to attract an angel investor to your company. Consumer solutions, road transportation and automotive, manned aviation, drones, maritime, emergency response, rail, agriculture, geomatics and critical infrastructure — they’re all there.

Its value-chain diagrams for each market sector are particularly useful in parsing the constant flow of economic activity. Though not necessarily complete in every aspect, they are very helpful in discerning the structure of each market segment and many of its active participants.  You can’t tell the players without a program. 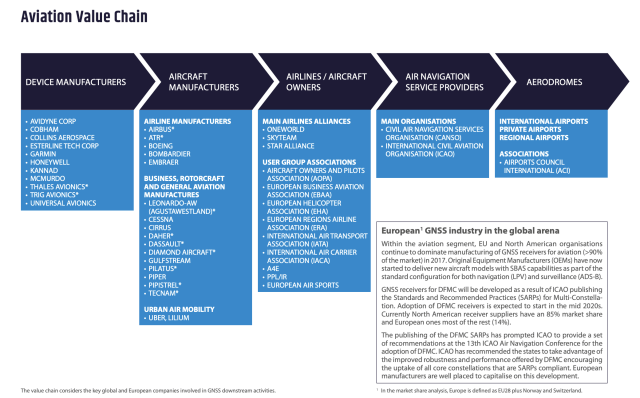 One does occasionally pan out nuggets of unexpected goodness — that is to say, mild surprise —  from this smoothly flowing 112-page stream of optimism.

Here are a few:

The drone sector has surpassed mature segments such as maritime, aviation and

agriculture in terms of shipments. However, the explosive growth seen in the past few years will slow, reaching a saturation point in the mid-2020s. Since a drone’s operation life is relatively short, annual shipments will continue to be significant, replacing devices in the fields but not opening up new ones.

The fledgling sharing economy has emerged as one of the fastest growing business trends in history, based on “access to” rather than “ownership of” assets of various kinds. In order to gain said access to mobile assets such as scooters, bikes and cars — and soon, flying taxis — and to manage them, PNT technology is essential. Thus, GNSS in intimately bound to a sector that in 2014 was estimated to be worth €12 billion but will grow to an astounding €300 billion in only eleven years.

Our lives are going to change. 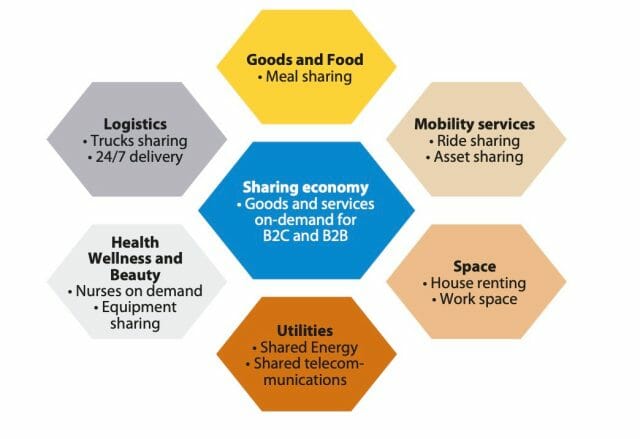 To read the report for yourself and in full, download it free here.