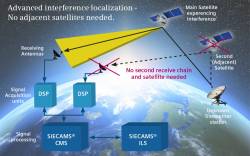 As described in the November-December issue of Inside GNSS, “Interference Localization from Space,” radio frequency interference causes the satellite industry to lose millions of dollars per year due to detrimental effects, ranging from a degradation in the quality of service to the complete loss of service.

As described in the November-December issue of Inside GNSS, “Interference Localization from Space,” radio frequency interference causes the satellite industry to lose millions of dollars per year due to detrimental effects, ranging from a degradation in the quality of service to the complete loss of service.

For satellite operators and users, including the GNSS community, the ability to rapidly identify and mitigate interference — intentional or not — is crucial to protecting the core functionality of their assets and service operations.

According to a statement by the European Space Agency (ESA), which supported the development of the geolocation system, SIECAMS ILS ONE works by analyzing the signal distortions primarily caused by satellite movement, atmospheric, or weather influences and other environmental factors. By comparing such signal distortions of the interference signal with known signals, ILS ONE is able to identify the precise location of the interference source.

Up to now, interference geolocation systems required having two geostationary satellites in close proximity to each other in order to obtain sufficient crosstalk for reliable geolocation signal processing. According Siemans Convergence Creators, SIECAMS results in a significant improvement in the resolution of interference issues compared with traditional satellite-interference localization systems.

“The SIECAMS single-satellite solution is a real game-changer for the satellite industry,” says Stephane Pirio, ESA Technical Officer for the activity. “It is much cheaper than traditional geolocation systems and this makes it particularly attractive for small- and medium-size satellite operators.”

SIECAMS ILS ONE has been very successfully used by Eutelsat since early 2016.

Siemens Convergence Creators has made substantial investments towards the development of tools for satellite interference mitigation in the last decade within the framework of its SIECAMS product line. SIECAMS currently comprises the carrier-monitoring and interference-detection tool SIECAMS CMS, the carrier-ID detection tool SIECAMS CID, the geolocation system SIECAMS ILS, and the single-satellite geolocation system, SIECAMS ILS ONE.

Until now, the company says, satellite operators had to invest in high-quality geolocation tools and personnel training to enable their own staff to identify, locate, and reduce or eliminate sources of interference in order to avoid potential damage claims and the risk of losing customers. Even so, locating the origin of interference may take days, weeks, or even months.

The Satellite Geolocation Service went into operation on January 9 and can be ordered on demand for individual interference events, or via yearly subscription that includes a contingent of interference localization instances.

Part 2 of the Working Papers on satellite-based geolocation of interference can be found in the January-February issue of Inside GNSS.