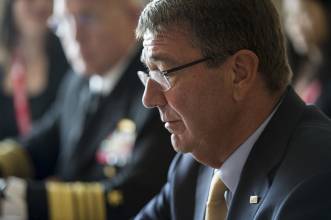 It’s official. The Department of Defense is sticking with its current GPS ground system development program and with its current prime contractor Raytheon — although the details of how it will realign the program remain unclear.

It’s official. The Department of Defense is sticking with its current GPS ground system development program and with its current prime contractor Raytheon — although the details of how it will realign the program remain unclear.

What is clear, however, is the cost of the program has increased again. According to a story posted Friday afternoon on the defense.gov website, the current total program cost for Next Generation Operational Control System or OCX is now estimated to be $5.46 billion. That’s up from the $5.3 billion Inside GNSS reported in April. The original estimated cost for the program was $1.5 billion counting all the contract options.

The ballooning cost is not a surprise at this point, but it could be a problem. Congress moved to kill the program in May, asserting that it had breached limits set by the Nunn-McCurdy law. Indeed, Secretary of the Air Force Deborah Lee James declared June 30 that OCX had experienced a critical Nunn-McCurdy breach, which put the program on a path to automatic cancellation on Friday (October 13, 2016). To prevent the program from shutting down on that date, Secretary of Defense Ashton Carter had to certify to Congress the need for the programs and show how it was going to be brought into line.

Frank Kendall, the under secretary of defense for acquisition, technology, and logistics actually certified the program to Congress on behalf of Carter on October 12, the Office of the Secretary of Defense said in a statement.

"Based on the Department of Defense (DoD) review and after consultation with the Joint Requirements Oversight Council and (Director of Cost Assessment and Program Evaluation), Under Secretary Kendall determined that the program capabilities provided by the OCX program are essential to national security, that no alternatives exist which would provide acceptable capability to meet requirements at less cost, that remaining costs for the restructured OCX program are reasonable and higher priority than programs whose funding must be reduced to accommodate the growth, and that the management structure for the program is adequate," the Pentagon said in its statement.

Raytheon recently announced that it had completed a series of “risk reduction” functional checkouts of OCX Block 1 capabilities, with a focus on OCX software. This latest development activity integrated iteration 1.5 of the OCX Block 1 Master Control Station with the GPS System Simulator and ran operational scenarios, representing the first end-to-end integration of available Block 1 capabilities.

OCX’s development is delivered in "blocks," with Block 0 comprising the Launch and Checkout System to take GPS III satellites into early orbit. Block 1 is built on Block 0 and delivers the full OCX capability, which allows the Air Force to transition from its current GPS ground controls to the modernized and secure GPS OCX master control station.

Diving Deep
Kendall held his fourth “Deep Dive” review of the program to assess progress on September 28, according to the statement. "Secretary James and Under Secretary Kendall concluded that Raytheon has continued to make sufficient progress against the Key Milestones established during the March 8, 2016, review to warrant continuation," DoD said.

The program office and Raytheon have agreed to a plan to prioritize implementing automation and a new software development approach to improve execution," DoD said, and the quarterly reviews will continue.

“The teamwork achieved by Raytheon and the Air Force to get to this point has been remarkable," Raytheon Intelligence, Information and Services President Dave Wajsgras said in a statement. "Going forward, Raytheon is committed to delivering solid execution on OCX, meeting schedule requirements and controlling costs. Raytheon recognizes the critical capability OCX provides at the national level. We must and we will deliver the required GPS ground controls to our customer and we’re demonstrating substantial evidence of progress."

Congress, however, may or may not be convinced, suggested a source familiar with OCX, despite the best efforts of Raytheon and Kendall.

"The question," they said, " is what’s the reaction going to be from Congress? They can say ‘OK, we accept that.’ or, number two, ‘We don’t accept that at all.’ And all of a sudden they [GPS program managers] get another big degradation in funding."

The expert said the Pentagon is reviewing its options regarding the ground system specifically and the GPS program more generally, and what they decide could trigger additional schedule changes. For example, updating the requirements for the GPS III satellites — which the source said has been on the table — could trigger changes in the OCX program, perhaps even simplifying it.

Despite the budget overruns and the fact OCX is 5 years behind schedule, DOD has been consistent in its message to Congress that OCX is essential.

"The concern I have is the legacy [GPS Operational Control Segment, or OCS] program we have right now has significant information assurance vulnerabilities," said Air Force Space Commander Gen. John Hyten during his September 20 confirmation hearing to become commander of U.S. Strategic Command (STRATCOM). "Basically we’re plugging those holes as fast as we can, and the best way to do that is with people. And, as you were talking about, people are our most valuable resource — and we have to divert a lot of people to secure that critical capability for the United States and the world. The OCX program would fix those problems."

Hyten was subsequently confirmed as the new head of STRATCOM as has his replacement at Air Force Space Command, USAF Lt. Gen. John Raymond.