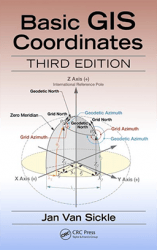 The book explores the upcoming change in the basis for horizontal and vertical coordinate systems in North America, and covers the fundamentals of State Plane Coordinates and Universal Transverse Mercator Coordinates, heights and the Public Land Surveying System. It also explains the progression of the ideas that are the foundation of geospatial coordinate systems. Each chapter concludes with review questions and answers; the book provides critical information needed to understand coordinate systems in GIS technology.

Smart phones, car navigation systems and now driverless cars are based on coordinates and coordinate systems. This book is about why coordinate systems work, and why they sometimes don’t work. The previous editions are based on the North American Datum(NAD 83), the horizontal control datum for the United States, Canada, Mexico, and Central America, and the North American Vertical Datum(NAVD 88). By tracking the dynamic nature of the Earth, NGS will provide a new National Spatial Reference System that is semi-dynamic. It will replace NAVD 88 with a GNSS/geoid datum and replace NAD 83 with a geocentric GNSS-based datum. These changes will be explained in the new edition.

About the Author
Van Sickle has more than 45 years of experience in GIS, GPS, surveying, mapping and imagery. He began working with GPS in the early 1980s when he supervised control work using the Macrometer, the first commercial GPS receiver. He created and led the GIS department at Qwest Communications for the company’s 25,000-mile worldwide fiber optic network. He also led the team that built the GIS for natural gas gathering in the Barnett Shale.

To order the book go to https://www.crcpress.com/Basic-GIS-Coordinates-Third-Edition/Van-Sickle/p/book/9781498774628