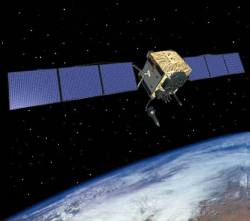 Just when you thought it was safe to go back in the water . . .

Discovery of a power anomaly in signal generator of the first GPS Block IIF space vehicle (SV) has thrown a new wrinkle into the long-delayed follow-on generation of spacecraft.

Meanwhile, it’s all systems go (and all fingers crossed) for launch of a modernized Block IIR satellite IIR-20(M) with the demonstration L5 navigation payload designed to secure priority GPS access to the frequency.

Just when you thought it was safe to go back in the water . . .

Discovery of a power anomaly in signal generator of the first GPS Block IIF space vehicle (SV) has thrown a new wrinkle into the long-delayed follow-on generation of spacecraft.

Meanwhile, it’s all systems go (and all fingers crossed) for launch of a modernized Block IIR satellite IIR-20(M) with the demonstration L5 navigation payload designed to secure priority GPS access to the frequency.

In the words of a GPS Wing spokesman at the Space and Missile Systems Center (SMC), Los Angeles Air Force Base, California, “In reviewing test data from the final phase of SV1 thermal vacuum test, [government and Boeing mission assurance teams] identified a new concern that a component in the L2 transmitter may not have sufficient design margin to operate at its highest required power throughout the satellite lifetime.”

Called plasma events, the anomalies resulted in power surges that reportedly affect all signals on the L2 frequency and appear likely to delay transport of the spacecraft to the launch site in Florida.

Designed and manufactured by the Boeing Company, the IIF satellites carry a navigation payload with high-power amplifiers built — like the payloads on all versions of the GPS satellites to date — by the ITT Corporation in Clifton, New Jersey.

“Boeing has identified multiple options for addressing the concern and is working parallel solutions to deliver redesigned transmitters this summer,” said the GPS Wing spokesman.

The GPS Wing and Boeing are reviewing the shipment plans in conjunction with the corrective actions to determine when to ship a satellite to the Cape Canaveral launch site for continued testing. “The Wing may choose to ship SV2 for testing while it completes actions on SV1,” said the spokesman. SV2 would then return to Los Angeles AFB for further work.
Launch of the first IIF had been expected in October. Now the GPS Wing predicts that launch only as “late 2009.”

“Second launch will be scheduled based on constellation sustainment needs,” said the Wing spokesman, “but is not projected for sooner than six months after the first launch.”

Current status of the IIFs? SV1 is awaiting Final Integrated System Test; SV2 is in Initial Integrated System Test.
Meanwhile, the U.S. Air Force is in a race against the clock to get the new L5 signal on the air by August 26, 2009, in order to meet an International Telecommunications Union (ITU) deadline for securing a preferential L5 frequency allocation for GPS operations.
Problems have pushed the GPS program much closer to the deadline that expected.

The first and probably only opportunity to meet the deadline: a modernized GPS Block IIR-M satellite — IIR-20(M) — with an experimental L5 signal demonstration payload scheduled for a March 24 launch.

IIR-20(M) had originally been set to fly in June 2008, but detection of a suspected faulty component in a Delta II rocket during a pre-launch check led to postponement of IIR-M launches until the component could be replaced. That component has now been replaced, according to the Wing.

On March 18, after a preliminary review, Air Force and United Launch Alliance mission managers announced their decision that the launch of the Atlas V WGS-2 mission will not take place prior to the scheduled Air Force Delta II GPS IIR-20(M) mission slated for March 24.  A review of the timeline of the work needed to inspect the Atlas V, fix the identified problem and prepare for a rescheduled attempt revealed it could not take place prior to the Delta II launch date.The March 17 Atlas launch attempt was scrubbed when an anomalous leak rate was detected in the Centaur upper stage oxidizer valve.

And if problems should arise with the IIR(20)-M satellite or launch? “Originally, the U.S. planned to meet the deadline with the first IIF satellite,” said the spokesman. “The IIR-20 demo payload was developed as the back-up plan.”

Should the IIR(20)-M’s L5 signal not get on the air, it could deprive GPS of unconditional use of the frequency. Failure to get the L5 signal on the air by the ITU deadline would give priority to whichever GNSS system begins broadcasting on that frequency first — effectively placing the burden of proof on latter-day GNSS providers that their signals wouldn’t interfere with signals of the first system.

Europe’s Galileo faced a similar situation with its signal allocations. THe European solution was to build two Galileo In-Orbit Validation Element (GIOVE) satellites — GIOVE-B and a smaller version, GIOVE-A — in parallel by separate teams. GIOVE-A was delivered in orbit on schedule to enable the EU to claim the ITU frequency filings for Galileo. GIOVE-B suffered an electrical malfunction during testing in Italy that extensively damaged the spacecraft, which eventually was launched more than two years later than GIOVE-A.