A favorable GAO ruling discounted Congressional allegations that the FCC skipped a key legal step before granting Ligado’s controversial application. This positions the broadband company closer to its target and to ongoing interference with GPS signals.

After almost two decades of controversial stops and starts, Ligado Networks continues to fly over all obstacles in its path to attaining full deployment of a nationwide mobile satellite system (MSS) for ancillary 5G terrestrial operations. On August 13th, 2020, it soared once again. A favorable General Accounting Office (GAO) ruling discounted Congressional allegations that the Federal Communications Commission (FCC) skipped a key legal step before granting Ligado’s controversial application to deploy a low-power terrestrial nationwide network in the L-Band. This positions Ligado even closer to its target.

Will continuing concerns about GPS interference ever be addressed?

To say the procedural history here is complicated would be an understatement. Mergers, acquisitions, bankruptcy, testing and evaluation disputes, and a winding procedural history with the FCC are generally outlined in the Storied Past sidebar, as a refresher.

Coming to (nearly) the present day, testing between 2016-2017 continued to show Ligado interference with GPS. These results ultimately found their way to the FCC by December 2019. Despite this, On April 22, 2020, the FCC unanimously approved Ligado’s plan. A month later, the NTIA, on behalf of the executive branch, petitioned the FCC for reconsideration and to stay execution. Others followed suit. All these requests remain pending.

So here we are. And the stakes are huge.

Big ideas usually equate to big money. Not surprisingly, in 2019, Ligado and its affiliates rolled $2,550,000 into lobbying efforts, an all-time high, according to the Center for Responsive Politics website Open Secrets. It’s on track to top that this year, with $1,510,000 racked up so far in the first two quarters of 2020 alone.

“GPS is the DNA of our way of war. It’s systemic in everything that we do.”

Ligado’s investments in lobbying correlate not only to the perceived value of its low-power nationwide mobile broadband network, but also to the scope of the pushback. Besides the NTIA petitions mentioned, other filings, petitions and ex parte communications with the FCC continue to pour in from industry, trade associations, and feds. Lockheed Martin, Iridium Communications, the Airline Pilots Association, the Association of Equipment Manufacturers, and International Air Transport Association and Airlines for America have all recently injected themselves into the FCC administrative processes in this case. A newer group, the Keep GPS Working Coalition, has also joined the cause. It includes the Association of Equipment Manufacturers (AEM), the American Farm Bureau Federation (AFBF), the American Road & Transportation Builders Association (ARTBA), the Aircraft Owners & Pilots Association (AOPA) and the Boat Owners Association of The United States (BoatU.S.).

So too have 32 U.S. senators, led by Jim Inhofe (R-Oklahoma) and Jack Reed (D-Rhode Island), chairman and ranking member of the Senate Armed Services Committee, as well as select members of the House, including Rep. Mac Thornberry (R-Texas), ranking member of the Armed Services Committee. The three wrote a letter to the President stating “The functions provided by our GPS satellites will be all the more important to enable a rapid economic recovery from the effects of COVID-19. Ligado’s plan would hinder GPS functions for the entire American economy.”

It speaks volumes that this effort is bipartisan, particularly in an environment when virtually nothing inspires both sides of the aisle to lock arms.

The opposition contends Ligado’s L-spectrum block will pose a threat to the viability of civil and military GPS receivers across the country. On the civilian side, GPS receivers fuel the economy to the tune of at least a billion USD daily, supporting stock market financial transactions, drones, telemedicine and life services, Web power and information transmissions, as well as guiding planes, buses, and cars. On the military side, it could potentially cripple warfighting capabilities. Gen. John W. “Jay” Raymond, Chief of Space Operations, U.S. Space Force, testifying to the Senate Armed Service Committee in May, called GPS “the DNA of our way of war. It’s systemic in everything that we do.”

Ligado counters that it will create a spectrum buffer to avoid all of these problems. What that buffer looks like remains under debate: will it comport with an internationally accepted Interference Protection Criterion (IPC): one-decibel degradation of carrier-to-noise power density ratio? Or will it be akin to the judicial standard for pornography: “I know it when I see it”?

In the absence of surety, and to avoid risk of systems failures, a filter could do the trick. However, developing such a filter would cost $9 million. The price tag for employing the filter-fix, retrofitting the hundreds of millions of GPS receivers already in existence, at least at this time, remains incalculable.

“If Ligado moves forward with establishing its network, we in the United States will have imposed a self-inflicted wound on GPS.”

Michael Griffin, Undersecretary for Research and Engineering, Department of Defense

Michael Griffin, DoD’s UnderSecretary for Research and Engineering testified before Congress that “if Ligado moves forward with establishing its network, we in the United States will have imposed a self-inflicted wound on GPS.” The sustained DoD opposition is notable, particularly in the face of its August 10, 2020 release of 100 megahertz (MHz) of contiguous mid-band spectrum, in the 3450-3550 MHz band, to be made available for 5G by the end of the summer. Just like in real estate, spectrum is all about location.

With petitions for reconsideration and stays pending, Congress lobbed out a procedural challenge to the Ligado Order.

The issue presented was whether Congress should have had an opportunity to review the FCC’s Ligado order, before it went final, under The Congressional Review Act of 1996 (CRA), 5 U.S.C. § 801.

The CRA requires federal agencies to submit a report on each new regulatory rule to both Houses of Congress and to the Comptroller General before it can take effect. Beyond providing a mere oversight mechanism, the CRA permits “fast track” procedures for Congress, by a joint resolution of disapproval in the Senate, to kill a federal agency’s regulatory rule. The enactment of a disapproval resolution not only stops the rule from taking effect; it also precludes the agency from issuing a substantially similar rule absent statutory authorization to do so.

Application of the CRA presumes that an agency has enacted a regulatory rule. At issue in this instance was whether the FCC’s Ligado order constituted such a rule. Enter the Government Accountability Office (GAO). Originally established by Congress in the Budget and Accounting Act of 1921 as part of the legislative branch, the GAO has a broad role of investigating “all matters relating to the receipt, disbursement, and application of public funds” and to “make recommendations looking to greater economy or efficiency in public expenditures.” GAO’s span of control has increased since its inception, now providing general oversight of federal activities and programs and publishing thousands of reports annually.

GAO’s review began in response to a request from Senate Armed Services Committee Chairman and Ranking Member, Senator Inhofe. In GAO Opinion B-332233, August 13, 2020, Federal Communications Commission—Applicability of the Congressional Review Act to Ligado Amendment to License Modification Applications, the watchdog found the FCC did not violate the CRA because the Ligado order did not constitute a “rule” requiring congressional review.


The CRA adopts the same definition of the term “rule” as the Administrative Procedures Act (APA), 5 U.S.C. § 551. The APA defines a rule as “the whole or a part of an agency statement of general or particular applicability and future effect designed to implement, interpret, or prescribe law or policy or describing the organization, procedure, or practice requirements of an agency.” The APA defines licensing as an “agency process respecting the grant, renewal, denial, revocation, suspension, annulment, withdrawal, limitation, amendment, modification, or conditioning of a license.” 5 U.S.C. § 551(9).

Here, Ligado’s permission from FCC was in the form of a license, granted under the Communications Act of 1934, 47 U.S.C. § 301 (“[n]o person shall use or operate any apparatus for the transmission of energy or communications or signals by radio…except under and in accordance…with a license” issued by the FCC).

The ramifications of this little-known GAO Opinion are definitive. In finding the CRA inapplicable to FCC’s modified permit, the GAO shut the door on one existing means for Congress to sideline the Ligado plan.

A legislative solution is in the works.

Senators Inhofe and Reed are looking to pass the Recognizing and Ensuring Taxpayer Access to Infrastructure Necessary (RETAIN) for GPS and Satellite Communications Act. This law would make Ligado responsible for any interference its fifth-generation wireless network may cause to GPS signals. Additionally, the SASC has included several Ligado provisions included in its version of the Fiscal Year 2021 National Defense Authorization Act (NDAA). Among other things, the Senate draft would prohibit DoD from complying with the Ligado order until it can provide a cost estimate.

Meanwhile the GPS industry, select feds and interested parties keep clamoring for change. As they do, the clock keeps ticking, the various petitions remain pending and the nation remains waiting for resolution of the Ligado situation, one way or another. 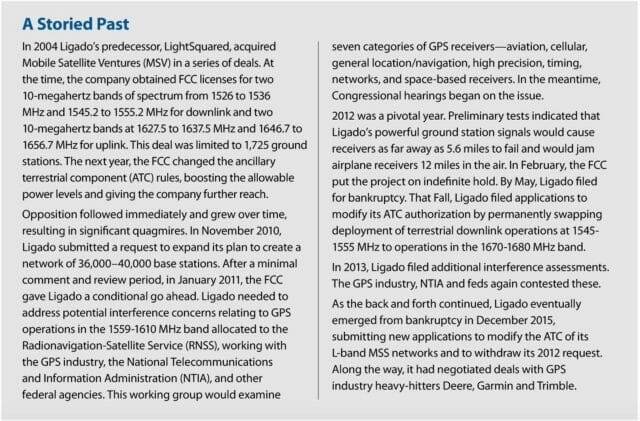