Another Successful Launch, But Pressure Still on for Galileo - Inside GNSS - Global Navigation Satellite Systems Engineering, Policy, and Design 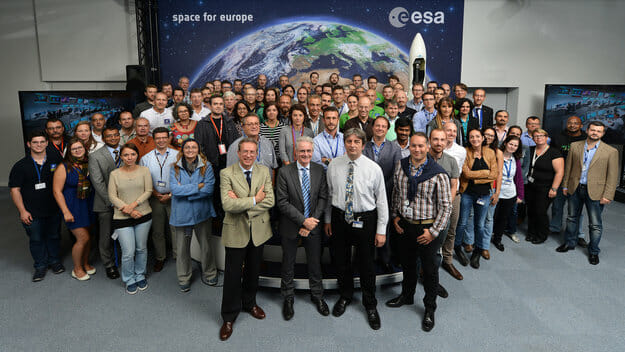 With a successful September 10/11 launch under its belt, the Galileo program continues to move in the right direction, but proponents should be cautious about overstating the rate of progress, lest too-hopeful forecasts come back to bite them (again).

The September 11 European Space Agency (ESA) press release featured a headline proclaiming that 10 Galileo satellites are now in orbit, and while technically that may be true, it bears considering whether the 10 satellites in question are all they’re cracked up to be.

With a successful September 10/11 launch under its belt, the Galileo program continues to move in the right direction, but proponents should be cautious about overstating the rate of progress, lest too-hopeful forecasts come back to bite them (again).

The September 11 European Space Agency (ESA) press release featured a headline proclaiming that 10 Galileo satellites are now in orbit, and while technically that may be true, it bears considering whether the 10 satellites in question are all they’re cracked up to be.

Galileo satellites 9 and 10 (full operational capability or FOC satellites 5 and 6) are functioning well, according to ESA, and the initial series of flight operations is continuing as part of LEOP – the critical launch and early orbit phase.

The two spacecraft are being stepped through an intense series of check-outs, confirmations, mode changes, configurations, and health verifications by the joint ESA/CNES mission team working around the clock at the European Space Operations Center in Darmstadt, Germany.

The team are now focussing on conducting a series of thruster burns designed to start the drift of the two satellites toward their target orbital positions.

“Following the burns performed during the LEOP phase, the satellites will continue naturally drifting, ending up in their final desired operational orbits at about 23 222 km after another set of thruster burns, planned to achieve fine positioning in orbit, around the end of October," says Liviu Stefanov, co-Flight Director from ESA.

Satellite Roll Call
Asked to spell out the functional status of the other European GNSS spacecraft in orbit, ESA’s Head of Galileo System Procurement Jörg Hahn is perfectly forthcoming. First are the four in-orbit validation (IOV) satellites:
·      GSAT0101 and GSAT0102, are healthy and broadcasting with the equivalent isotropically radiated power (EIRP) on all bands aligned to the public Open Service Signal-in-Space Interface Control Document (OS SIS ICD) specifications; the clocks are a passive hydrogen maser (PHM) and rubidium atomic frequency standard (RAFS), respectively.
·      GSAT0103 is healthy and broadcasting with EIRP on all bands backed off; the search and rescue (SAR) transponder is on; clocks RAFS and PHM.
·      GSAT0104 has been unavailable since May 27, 2014, due to a power loss (Notice Advisory to Galileo Users or NAGU 2014014); broadcasting E1 only; SAR transponder is on; clock is RAFS.

The six full operational capability (FOC) satellites, which should form the core of the eventual 30-satellite Galileo constellation, have the following status:
·      GSAT0201: in eccentric orbit due to a launch anomaly involving the Soyuz Fregat upper stage, under in-orbit testing, all signals nominal; the clocks are PHMs; SAR transponder is on.
·      GSAT0202: in eccentric orbit, under in-orbit testing, all signals nominal, PHM, SAR transponder is off.

ESA spokesman Franco Bonacina elaborates, “The two that were put in the wrong orbit some time ago — August last year — could be rescued and put to work; they are transmitting navigation signals for in-orbit testing purposes. They will be able to work almost as well as the others, at least in a way that is not degraded for the users.”

Hahn says, “Both these satellites are transmitting navigation signals for in-orbit testing purposes. The target orbit where they have been positioned allows for these partial signals to be used. The satellites will now be included in the operational constellation with a view to perform ‘live’ tests involving as well external users. After these tests, which will last six months to one year, the decision on the future use of these satellites for navigation will be taken by the European Commission. In the meantime these satellites can be used operationally for the Galileo Search and Rescue service.”

Just to be sure all are on the same page, we asked European Commission spokesperson Lucia Caudet to provide the EC perspective on the errant FOCs: “Two were launched into incorrect orbit last summer,” she says, “but have been repositioned to an improved orbit and their future use for navigation services is being tested. Despite their non-nominal orbit, they will be used for the provision of the Galileo Search and Rescue services; they can also be used for scientific purposes.”

And the remaining FOC satellites, according to Hahn, currently are in the following status:

Straightforward Assessment?
So, no one’s hiding anything, the picture is clear. There are indeed 10 Galileo satellites in orbit, and no one can accuse ESA or the Commission of trying to spin the story in their favor.

But then again, it doesn’t take much to paint the picture in a different shade, no spin intended. One Brussels insider who is close to the Galileo program does just that: “One IOV satellite is lost, payload not working; the other three are working with reduced performance. Two FOC satellites are in the wrong orbit; and GSAT0203 and GSAT0204 have shown troubling irregularities in their performance over the last two months.”

You can follow the operational status of Galileo satellites yourself here:
<www.gsc-europa.eu/system-status/constellation-Information>.

We also hear word of, “Many more problems in the ground segment, PRS activities delayed, Galileo initial services delayed, ESA procurement objectives and mission/service objectives that do not align,” and, finally, of a rising sense of dissatisfaction on the part of a particular Commissioner.

We apologize for our inability to add detail, and we are sorry that we cannot name all our sources. As it happens, keeping the picture clean is more than just a recommendation for officials in the European capital, and so they must remain under wraps.

Attitude Ever Upward
For her part, at least officially, European Commissioner for Internal Market, Industry, Entrepreneurship and SMEs Elżbieta Bieńkowska remains positive. In a release in the wake of this week’s launch, she states, "We are delivering on our commitment to build the Galileo infrastructure on time and within budget. The goal of the Commission’s space policy is to foster a booming and innovative internal market for space-based applications, and support the development of a robust European industry that can compete on the global stage and achieve great things.”

Nothing fancy there. Just the facts, ma’am.

And Lucia Caudet gives us the latest official estimates in terms of dates: “Initial Galileo services, starting with the Search and Rescue function, will be available for users already in 2016,” which of course could mean 31 December 2016, much later than previously pledged.

Caudet continues: “And our objective is to have full services in place in 2020, using the full Galileo network of 30 satellites and their supporting ground stations. With 10 satellites now in orbit, we are well on track.”

As we’ve heard before.

A famous vehicle manufacturer named Ford once said, “You can’t build a reputation on what you are going to do.” Unfortunately, the Galileo program has too often tried to do exactly that, and one is therefore nervous when one reads in releases from ESA’s upper echelons:

"The deployment of Europe’s Galileo system is rapidly gathering pace,” or

“The day of Galileo’s full operational capability is approaching,” and especially

“We are doing the technical work to ensure Galileo goes on ‘forever’.”

Meeting, Rather than Raising Expectations
In a recent interview broadcast on Italian television, former President of the European Commission Romano Prodi said, “Galileo is a sad example of the EU failure.” [translated from Italian]

Such a declaration may seem a bit harsh, and certainly it needs some explaining. But we won’t try to explain it. All we need to know is that “Galileo, the EU failure” remains a perception, at least for some.

One can’t help wondering if the perception of Galileo as a failure isn’t at least partly based on the program’s tendency to promise too much, then hyping each new micro-victory, building too-great expectations, that always seem to lead to disappointment.

The EU has a real need to build trust and belief in it as a force for good and a body worthy of support, especially in times of political and economic uncertainty. No satellite program should ever be expected to deliver that. This isn’t, after all, about sending a man to the moon.

Settle down, Europe. The system is being built, one step at a time. Just keep an even keel and all will be well. But Galileo is not and never will be the EU’s savior.

“It is a pity,” says another frustrated commentator. “The U.S. needs Galileo right now as a partner, but they would count on a serious, service-oriented, no-nonsense organization, and we are not there yet.”

The coming days will see an ESA team, led by Daniel Blonski, presenting a full Galileo system update at the ION GNSS+ 2015 conference in Tampa. Here’s hoping the audience will get a clear and detailed picture of where Galileo is and where it’s going, without all the jazz.