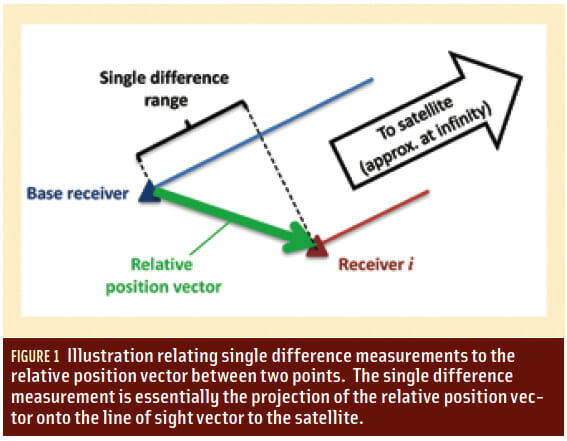 Q: How do you compute relative positions with GNSS?

Q: How do you compute relative positions with GNSS?

Definition of Relative
Strictly speaking, all positioning is relative because the process always involves measurements between two or more points. In the context of GNSS, a user’s position is always computed relative to the satellite coordinates, which are assumed to be known in an absolute sense. As such, the corresponding position is effectively absolute.

This somewhat pedantic distinction aside, this article focuses on computing the relative positions of GNSS users. To this end, we will consider two situations.

The second, and perhaps less well known situation, is positioning one user over time. That is, computing the position of a GNSS receiver relative to its position at some previous point in time. This is useful when the motion of the vehicle is the important factor, not its absolute position.

GNSS Measurements
Before looking at how both types of relative positioning can be performed, let us quickly look at the GNSS measurements. For the purpose of this article, the pseudorange measurement made to the a-th satellite from the i-th receiver can be written as

where ρ is the geometric range to the satellite, b is the receiver clock bias (scaled to units of distance), and e is the combination of all measurement errors.

Similarly, the carrier phase measurement, scaled to units of distance by multiplying by the carrier wavelength, can be written as

where λ is the carrier phase wavelength and N is the integer carrier phase ambiguity. We acknowledge, of course, that the measurement errors for the pseudorange and carrier phase cases are not the same. For the time being, however, they can be denoted the same.

Relative Positioning of Two or More Users
To illustrate this concept, we focus only on the pseudorange equations, although the same concepts apply equally to the carrier phase as well. To begin, as in differential GNSS (DGNSS), a between-receiver single difference (denoted Δ) is formed by differencing measurements between receivers to a common satellite.

Two assumptions were made in the foregoing development, and we will now address them in the opposite order in which they were introduced. First, we assumed that the initial position estimate was the position of the base receiver. Even if this was not the case, the computed position for receiver i will still be relative to the other point (see Figure 1, inset photo above right). In other words, the process of differencing the measurements between receivers automatically leads to relative positioning solutions.

Second, we assumed that the coordinates for the base receiver were known. In fact, this is not an overly restrictive requirement because we do not require this position to be known with a high degree of accuracy.

Over-Time Relative Positioning
Over-time relative positioning typically uses carrier phase measurements for reasons that will be made clear shortly. As in the previous case, the measurements are also differenced, but in this case the difference is between epochs (denoted d).

Summary
In this article we looked at how differencing measurements — either between receivers or over time — led directly to the computation of a relative position. In DGNSS algorithms, if the base station coordinates are known in an absolute coordinate frame, the position of the other receiver is also absolute only because it is computed relative to a receiver with an absolute position.

This is often taken for granted, but by recalling the underlying concepts, new applications involving relative GNSS positioning can be envisioned and/or developed. Similarly, differencing measurements over time can provide useful information about the motion of the user, which can be important for many applications.

(For Mark Petovello’s complete answer to this question, including formulas and tables, please download the full article using the pdf link above.)

Invitation to Help Out
The GNSS Solutions column is always looking for new contributions. If you would like to prepare a “solution” on a topic that you believe would be well suited to the Q&A format of the column, I would really like to hear about it. This might be a GNSS concept or technique that you believe is often misunderstood, a principle or aspect of GNSS that you often find yourself explaining to others, or perhaps ways in which new and exciting developments can benefit the GNSS community as a whole. I would be happy to work with you to get that information out. As always, questions that you would like to see answered in the column are also welcome.