A mega-scale infrastructure project in Norway found that Galileo-enabled machine guidance systems offer an advantage over GPS-only machine control in obstructed environments, due to the increased overhead availability of satellite signals.

The Follobanen is a 22.5-kilometer high-speed railway under construction between Oslo and Ski, Norway. It will be engineered for 250 km/h (155 mph) trains, running mostly underground for 19 kilometers in the twin-tube Blix Tunnel, the longest railway tunnel in Norway. Outside the tunnel, another 2-km section of track runs between high sheet pile walls on both sides to protect trains from falling rocks. During construction of this segment, machines used guidance technology from various providers for automated digging enabled by RTK positioning with centimeter-level accuracy. Accuracy at this level is required to ensure proper alignment of the wall segments as well as effective water drainage slopes.

As the walls went up, they created a canyon around the construction site. One by one, machine guidance systems on excavators started to fail. Excavators and loaders were out of commission for days, incurring costs and delays for the operators. As construction slowly progressed, eventually only those machines with Galileo-enabled 3D guidance systems from Makin’, a Scandinavian machine control supplier, equipped with AsteRx-U GNSS receivers from Septentrio, continued to operate onsite. The multi-constellation capacity of the Septentrio receivers on the Makin’ systems meant that they had access to more satellites, giving them the best positioning availability.

[Image above: High metal fences form a canyon around the Follo Line construction site. Multi-frequency GNSS receivers with multipath mitigation can be relied on to operate even in such challenging environments. All photos courtesy Septentrio/Makin’.]

“Galileo’s differentiators, such as better multipath mitigation and multi-frequency, together with multi-constellation capability, are delivering real benefits to users. We are working closely with industry to make them aware of these benefits so they can pass them on to their customers,” said GSA Head of Market Development Fiammetta Diani.

Operators are becoming increasingly aware. “Robust GNSS receivers in our guidance systems helped us get the reputation we needed to become the number one machine control company in Norway in under two years,” said Makin’ Chief Operating Officer Ruben Hensen. 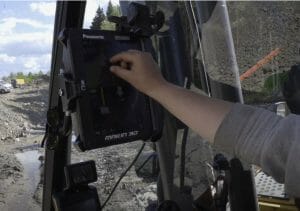 “I’ve had this [Makin’] system for two years now,” said Tommy Bjerkeengen, excavator operator, Toten Anlegg Og Transport, “and there have been no sensor errors, none at all. It’s very transparent and much easier to understand than the other brands I have tried. It’s much better when I can add all the models and just press the one I want to get references from. I can display all available data for the project at the same time. Also the sensors are incredibly fast. It’s like digging in real time, no delays at all.” 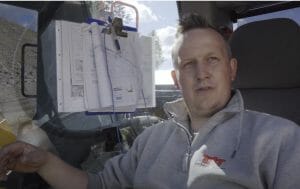 On the rail line project, metal fences around the construction site not only blocked low-elevation satellites but also generated reflected GNSS signals causing multipath. Receivers with access to the Galileo constellation benefit from the multipath mitigation that Galileo signals offer, allowing them to work better in challenging environments.