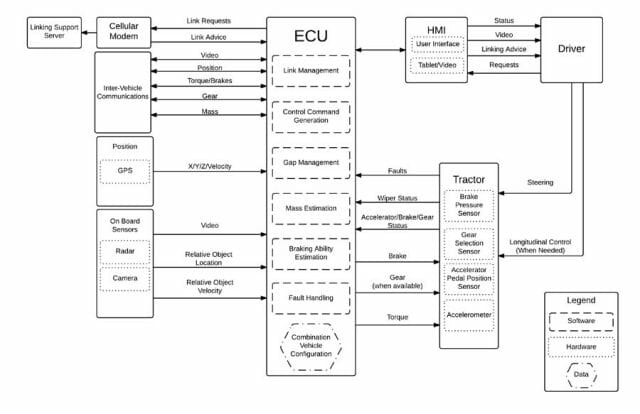 Although media coverage of autonomous or self-driving vehicles has focused on their use by private car owners, an initial report on driver-assistive truck platooning (DATP) highlights the prospects for their use in the commercial freight sector.

Although media coverage of autonomous or self-driving vehicles has focused on their use by private car owners, an initial report on driver-assistive truck platooning (DATP) highlights the prospects for their use in the commercial freight sector.

DATP employs GNSS, radar, vehicle-to-vehicle communications, video and other technologies to decrease over-the-road truck headways (distance between vehicles), with the objective of improving fuel economy without compromising safety. David Bevly, director of the GPS and Vehicle Dynamics Laboratory (GAVLAB) at Auburn University, led the research team that conducted the research and drafted the report.

“Driver Assistive Truck Platooning, if shown to be commercially viable, would lead to new levels of freight/fleet efficiency and improved mobility for all highway travelers, while substantially reducing trucking-based emissions and enhancing the V2X communications environment,” the report concludes. Initial results suggest that DATP would enable up to 10 percent fuel economy for the trailing truck, and about percent fuel economy for the leading truck.

Long haul trucking alone represents more than 10 percent of oil use in the United States, with fuel comprising 41 percent of fleet operating expenses. Models developed at GAVLAB inidcated that platooning would not negatively affect traffic and, if DATP penetration reached 60 percent of U.S. fleets, could actually improve traffic flows.

Platoon formation appears to be feasible in some operations, based on a case study using actual truck movement data from a truck GPS database maintained by the American Transportation Research Institute (ATRI), a core team member of the DATP project. Fleets and drivers who operate average truck trips of more than 500 miles would experience the highest returns on investment from platooning, the Phase 1 study concluded.

GNSS is currently used in prototype automated vehicles on public roads for gross positioning but currently is inadequate for precise positioning due to of inaccuracy, signal loss, and jamming, according to Russell Shields, a member of the Space-Based Positioning, Navigation, and Timing (PNT) Advisory Board and the former CEO of navigable mapbase provider Navteq.

Autonomous truck operation requires augmented GNSS with accuracy an down to less than 10 centimeters and employing devices with “complete reliability,” Shields said in a recent presentation to the PNT advisory board.

Instead current prototype automated vehicles rely on other sensors, such as cameras, radar, or lidar, to provide precise positioning. In the DATP project, radar represented the primary sensor for determining and maintaining appropriate distances between trucks.

In Phase 2 of the DATP project, the research team will be conducting both test-track and on-road pilot testing of the system. In addition, the team will monitor and assess a variety of human factors, including driver satisfaction, driver training requirements and driver operational experiences. The business case analysis will be extended based on these results.

DATP positioning requirements call for GNSS data to provide a velocity accuracy within 0.1 miles per hour, a positioning subsystem able to discriminate between communications from in-lane vehicles, adjacent lane vehicles, and other vehicles, and, in the case of loss of forward sensor (e.g., radar) data, the DATP system able “to maintain position referencing in relation to the lead vehicle for a sufficient time to safety separate the two vehicles while this condition persists.”

DATP builds on adaptive cruise control (ACC) technology, which has been available to the trucking industry for several years. (Approximately 100,000 ACC-equipped Class 8 trucks — those weighing more than 33,000 pounds (14,969 kilograms) — are currently operating on U.S. roads).

Shields predicted that Level 3 automated driving in trucks — with automated functions that can control the vehicle, but with a driver present and able to take over — would be in operations on U.S. highways as soon as 2023, three years later than that for passenger vehicles.