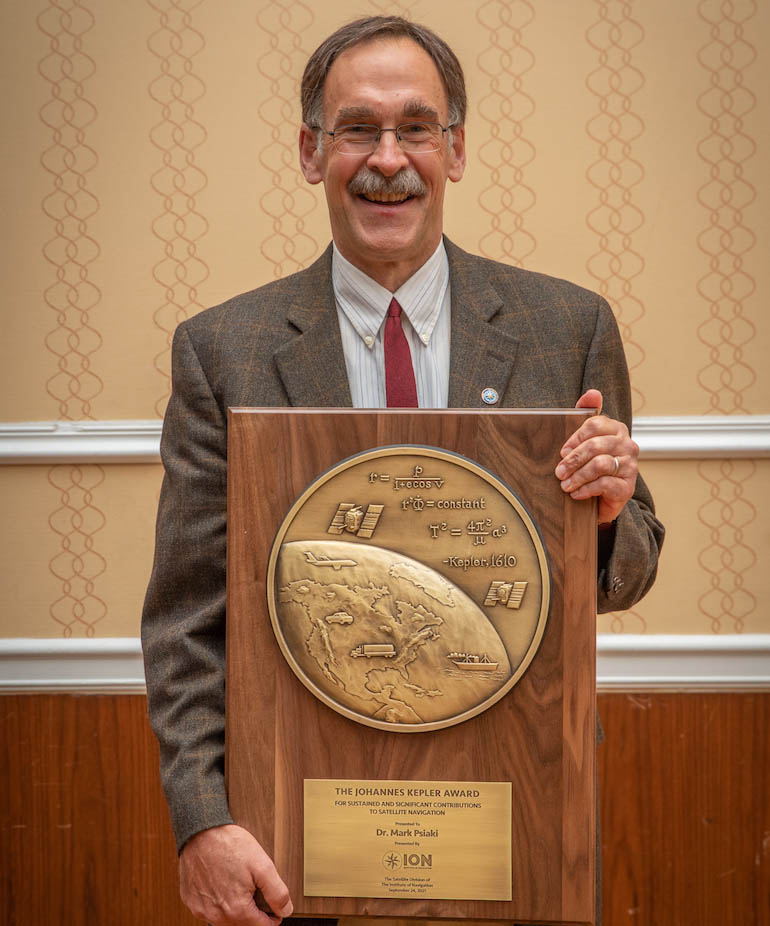 The Institute of Navigation’s (ION) Satellite Division presented Dr. Mark Psiaki with its Johannes Kepler Award during the Institute of Navigation (ION) GNSS+ 2021 Conference. In addition to many other achievements, Psiaki co-authored the Inside GNSS cover story, “TRANSIT on Steroids: Doppler-Based GNSS Meets Large LEO Constellations” with Ph.D. student Brian McLemore. That story, from the Nov/Dec 2020 issue, can be read here.

Psiaki was the lead signal processing designer/analyst for the iGPS program that combined Iridium L-band downlink signals, GPS signals, and inertial navigation system data to enhance GPS anti-jam capabilities.  His recent work on LEO-based navigation fuses observables from an existing global communications constellation with INS and other sensor data to provide a back-up to GPS.  He also demonstrated how Doppler-based navigation could replace pseudorange-based navigation if implemented using a large LEO constellation.

He has made many contributions to the practice of modeling, estimation, and detection applied to GNSS, including the study of GNSS carrier-phase modeling for space-based applications.  His campaign to decode the Galileo In-Orbit Validation Element-A (GIOVE-A) L1 BOC(1,1) PRN codes enabled Galileo receiver manufacturers to test their systems before the ESA published the codes. His group’s work on ionospheric scintillations led to the first commercially-available scintillation simulators.

The Johannes Kepler Award recognizes and honors an individual for sustained and significant contributions to the development of satellite navigation. It is the highest honor bestowed by the ION’s Satellite Division.