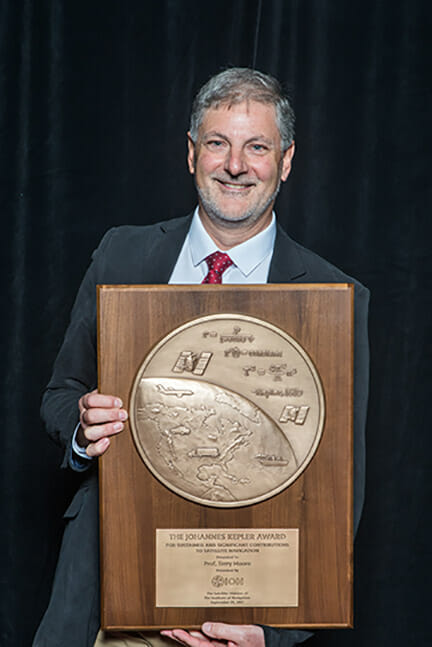 The Institute of Navigation’s (ION) Satellite Division presented Professor Terry Moore with its Johannes Kepler Award September 29, 2017 at the ION GNSS+ Conference (Portland, Oregon) for his outstanding contributions to the development of satellite navigation through a sustained and distinguished professional career devoted to research and teaching.

Moore has more than 30 years of research experience in surveying, positioning and navigation technologies, and is a consultant and advisor to European and UK government organizations and industry. He has taken a leading role in national and European initiatives aimed at integrating academic research and teaching activities in GNSS and interacting closely with industry. Moore is credited with extensive work on the introduction and implementation of WGS 84 as the standard reference systems for air and marine navigation, as well as the development of standard software tools for coordinate transformations and map projections used extensively through the aviation industry. Additionally, he is known for the development of GRINGO software that pioneered the use of raw GPS code and carrier phase data from low cost Garmin receivers. His work also includes the pioneering of novel methods and algorithms for GPS orbit relaxation; which led to reduced dynamic GPS-based orbit determination for LEO spacecraft, with a real-time implementation.

Moore is the Director of the Nottingham Geospatial Institute (NGI) at the University of Nottingham where he has responsibility for all of NGI’s research and teaching. He is also the founding Director of GRACE, the GNSS Research and Applications Centre of Excellence, which was jointly funded by the University of Nottingham and East Midlands Development Agency, and targets knowledge transfer between the NGI and business. Additionally, he leads the university-wide Aerospace and Transport Technology Research Priority Area. Moore has supervised numerous research projects funded by industry, research councils, the European Space Agency and the European Commission, and has supervised more than 30 PhD students.

Moore is involved in the volunteer activities of numerous international professional and scientific bodies. He is currently a Royal Institute of Navigation (RIN) Vice-President (now also President Elect) and a member of their Technical Committee, while simultaneously serving on the ION Council as a Technical Representative and as a co-chair of the ION’s Satellite Division’s Technical Peer Review Committee. He has served on the ION’s Satellite Division Executive Committee on numerous occasions and is a past ION GNSS+ program and general chair.

Moore is a Fellow of both ION and RIN. He holds a BSc degree in Civil Engineering and PhD degree in Space Geodesy, both from the University of Nottingham, where he was promoted to the UK’s first Chair of Satellite Navigation in 2001.

The Johannes Kepler Award recognizes and honors an individual for sustained and significant contributions to the development of satellite navigation. It is the highest honor bestowed by the ION’s Satellite Division.