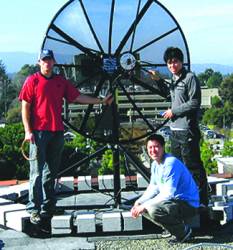 Until now, civilian global satellite navigation systems (GNSS) receivers have had essentially only one signal, the GPS L1 C/A-code, reliably available for navigation. However, in the coming years, many more operational GNSS signals, systems, and frequencies will become available to civilian users.

Until now, civilian global satellite navigation systems (GNSS) receivers have had essentially only one signal, the GPS L1 C/A-code, reliably available for navigation. However, in the coming years, many more operational GNSS signals, systems, and frequencies will become available to civilian users.

Some of these signals represent new navigation systems, while others are modernizations of existing GNSSes. Although we cannot predict how these signals will be used when they become more prevalent, the current GNSS environment allows us to take a glimpse into the potentials and challenges of that future.

The new signals provide a wealth of possibilities for improving performance, such as accuracy and availability. Different signals and possibilities, however, also pose technical challenges. Research centers and universities around the world are working on ways to use and take advantage of this new GNSS resource. In order to do that, observations of the signal in space are necessary to develop an understanding of the real RF spectral dynamics.

The difficulty with such observations is that the power of spread spectrum RF transmissions, which comprise the GNSS signals, is well below the noise floor. Although correlation can be used to bring the signal out of the noise, the codes from some of the new signals are not yet publicly available. This article presents data and measurements performed by two organizations, Stanford University and CNES (Centre National d’Études Spatiales), which are independently studying the new signals.

Stanford University and CNES have had an active role in the development of systems such as SBAS (WAAS, EGNOS) and other GNSS for aviation. Stanford University pioneered research in GPS, pseudolite attitude determination, and differential GPS navigation for airborne and space users. CNES developed a family of spaceborne GNSS receivers, and had a key role in the GALILEO signal design. . .

Equipment
Stanford University has developed an on-demand capability for observing GNSS signals using the Stanford GNSS Monitor Station (SGMS). The SGMS has a 1.8-meter steerable parabolic dish antenna with an L-band feed and is pictured in the photo above.

When higher gain signals are desired, researchers can use a 150-foot (45.7 meters) parabolic reflector dish antenna (the “Stanford Dish” pictured on the opening page of this article). Located on the Stanford University Radio Science field, the antenna is operated by SRI International. Data is collected from either antenna using a vector signal analyzer.

GNSS measurements have been done in the Toulouse Space Center (CST) of CNES, in the Transmission Technique and Signal Processing Department. Measurements at CNES station are taken with a system receiving and processing GNSS satellites signals, developed in collaboration with the European Space Agency (ESA).

This system is composed of a tracking system (a 2.4-meter dish), a broadband digitizer (bitgrabber), and a high capacity recorder (datalogger). The system allows for postprocessing of signals. The CNES bitgrabber and Leeheim dishes were used together to collect data over a one-week period in early April 2006.

The monitoring earth station at Leeheim, operated by the Bundesnetzagentur, supported a data collection effort to study GNSS signals.

The station has two steerable parabolic reflector antennas with diameters of 12 (Antenna 1) and 7 meters (Antenna 4).

In addition to measuring GPS, GLONASS, and GALILEO signals, this location can also monitor one of the Chinese Beidou satellites. The CNES bitgrabber and Leeheim dishes were used together to collect data over a one-week period last summer.

One early objective is assessing nominal signal performance. The ability to understand error modes and perform rapid diagnosis of signal anomalies requires an understanding of the directly observed signal operating normally. This has particular importance for navigation signals used for safety-of-life applications such as aviation.

The abundance and diversity of signals will mean that hardware receivers cannot economically be designed to use all possible signals. Eventually, they must make a choice of what seems to be the optimal mix of signals for particular applications in the marketplace.

Conclusion
. . . Although we will soon have many more GNSS signals to choose from, economics will dictate that most consumer receivers use a subset of available signals. Hence, a receiver designer must choose with prudence. Perhaps only one, two, or three frequencies will be used, depending on the application.

The design of these new signals incorporate a variety of features. As such, some features are more suitable to a given application than others. Hence, we no longer have to make one signal fit all our applications. Rather we can choose the best signal for each use.

Furthermore, the frequency diversity offered by multiple GNSS signals also provides interference mitigation. This will make future GNSS receivers more robust. In using these new signals, receiver designers need to pay attention to the particular interference environment of the signal. For example, E5 and L5 users will need to mitigate pulse interference from DME. However, the challenges faced are small compared to potential benefits.

Few would have thought of all the uses and applications of original GPS signal when the system first came on line. The next generation of GNSS, too, will offer many possibilities beyond what we can imagine today.

(For the complete article, including photographs, figures, graphs, and
additional resources, please download the PDF version at the link
above. )