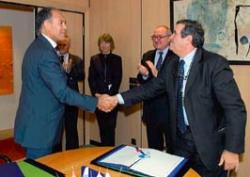 GSA Executive Director Pedro Pedreira (left) and Guiseppe Viriglio, ESA director of telecom and navigation, at signing of accord

Having abandoned — for the time being at least — attempts to attract private investment to the creation of Galileo’s infrastructure, European GNSS leaders are working to shape a Plan B that can gain support from the program’s extensive group of stakeholders.

Having abandoned — for the time being at least — attempts to attract private investment to the creation of Galileo’s infrastructure, European GNSS leaders are working to shape a Plan B that can gain support from the program’s extensive group of stakeholders.

At the direction of the European Transport Council, the European Commission (EC) Directorate-General (DG) Energy and Transport is preparing a comprehensive proposal for a Galileo program completely financed by the public sector. The transport ministers will take up the issue at their next meeting, now scheduled October 1–2. If all goes well, the council will approve the new strategy at a second meeting November 29–30.

In the meantime, work continues on many fronts to move the project forward using existing funds and political direction crafted during the five years since launch of the Galileo program.

The European GNSS Supervisory Authority (GSA) and the European Space Agency (ESA) signed a cooperation agreement on Galileo and the European Geostationary Navigation Overlay Service (EGNOS). The agreement facilitates better cooperation and exchange between the two agencies for the Galileo IOV (In Orbit Validation) phase, the EGNOS integration into Galileo, and certification and security activities for Galileo and EGNOS. It also paves the way for the transfer of the ownership of satellites and other EGNOS and Galileo IOV assets from ESA to the GSA.

On June 28, ESA and the Agency for Security of Air Navigation in Africa and Madagascar signed a cooperation agreement with the objective of using satellite navigation to improve air traffic safety over the African continent, including the extension and use of EGNOS as an operational service in Africa.

Then, on July 2 the GSA Administrative Board endorsed implementation of the multiplexed binary offset carrier (MBOC) waveform on the Galileo Open Service.

That will probably also trigger adoption of MBOC for use in the new civil GPS signal (L1C) planned for implementation on the GPS III satellites. A 2004 agreement between the European Union (EU) and the United States on GPS/Galileo cooperation and a subsequent March 2006 joint statement laid out a mutual plan to implement the jointly optimized common signal.

More broadly, the first European Space Policy was endorsed on May 22, 2007 at the fourth Space Council, a joint meeting of the EU’s Competitiveness Council and the Ministerial Council of the 17 ESA member states. Designed to provide an overall direction to European space affairs, the policy gives prominent attention to Galileo and the Global Monitoring for Environment and Security (GMES) programs on which ESA and the EU are cooperating.

Founded in 1955, the Assembly serves as a political forum that scrutinizes and supports European intergovernmental activities in all areas of security and defense.

Support for implementing the Galileo program emerged at a seminar in Rome on May 21, convened in the very room in the Italian Senate where the system’s namesake, Galileo Galilei, was put on trial for heresy.

But now, back to the difficult parts.

Following the collapse of attempts to negotiate a Galileo concession agreement with a consortium of aerospace companies, the EC and GSA recommended that the effort to create a public-private partnership (PPP) for Galileo be dropped. Instead, they suggested, the EU should undertake the program as a more traditional public procurement.

In a May 16 communication to the transport council, the EC laid out a series of scenarios, all of which begin with a public procurement of a certain number of spacecraft — some or all of the planned 30-satellite Galileo constellation — and the associated ground segment. Then, a PPP would be negotiated with a private operator to acquire the remaining satellites, if any, as well as responsibility for operations and maintenance of the infrastructure.

The EC’s communication also proposed retaining ESA as the procurement agent and design authority on behalf of the European Union, acting under the EU’s authority and rules.

At a June 8 meeting, the Transport Council agreed to discontinue the concession talks and reaffirmed the value of Galileo as “a key project of the European Union” that it would like to see fully operational by 2012. It also acknowledged that implementation of EGNOS by 2008 and Galileo as a whole would require additional public funding.

The transport ministers then asked the EC to prepare, by September, the following items for consideration at their next meeting:

The council’s backing of Galileo was buttressed — and politically smoothed — by a well-timed poll conducted by The Gallup Organization, Hungary division, upon the request of the DG Energy and Transport.

With results released just days ahead of the June 8 meeting, the survey asked 25,664 EU citizens about their opinion of satellite navigation, Galileo, and public funding of a European GNSS. Some 80 percent of respondents endorsed a European system and 63 percent were in favor of it being publicly funded.

Although the survey instrument was arguably flawed by a preface to key questions that characterized U.S., Russian, and Chinese GNSSes as “primarily for military use,” the poll clearly showed broad and deep support for an independent European GNSS.

The abandonment of the public-private partnership (PPP) approach, first embraced nearly nine years ago, has opened the Galileo program to a new round of political maneuvering with even more players and perspectives to reconcile than when the program was approved.

Although the council’s action was unanimous, differences broke out almost immediately over what a public procurement would look like and how additional public financing should be raised. Some countries are arguing for the money to be raised from existing funds through the EU budgetary process, others as separate national contributions to the program, either through an EU entity or through ESA.

Moreover, the European Union itself has gained 10 new members, mostly nations in central and eastern Europe, who did not participate in the original decision to undertake creation of a European GNSS.

A large body of regulations and council directives will also need to be undone or revised. And often painfully achieved industrial and national political understandings about allocation of Galileo contracts and operations will inevitably be revisited.

Furthermore, the European Parliament, which has fought a long-standing institutional with the EC over their respective roles, responsibility, and authority under the EU treaties, is aggressively attempting to interpose itself into the debate and decision making.

In a resolution adopted June 20, parliament that it would “oppose any solution which would combine Community funding with additional intergovernmental funding” and instead argued that “the Galileo programme should be financed in full from the Union budget.”

But That’s Not All

The new approach has raised new questions about the role and purpose of the GSA, whose primary was supposed to be signing and monitoring implementation of the concession contract. (For a fuller description of the GSA, see the article “Speaking with Authority”) in the May/June 2007 issue of Inside GNSS.)

Some observers expect that the EC will use the present situation as an opportunity to curb the GSA’s powers and bring it more closely under the control of the EC. The council decision established the GSA as “a Community agency,” that is, an entity with its budget and membership on its administrative board coming directly from the EU member states and not through the EC, the EU’s executive branch.

The next phase of decision making on Galileo will take place during Portugal’s six-month term under the EU’s rotating presidency. Whether that will have a bearing on the fate of the GSA, headed by a former Portugal Telecom group executive, remains to be seen. But Pedro Pedreira, GSA’s executive director, was also reportedly supported in his appointment by those 10 “accession” countries that will weigh in on Galileo’s fate for the first time.

Another sizable challenge from a different sector — industry — will also need to be addressed. In the years-long process of concession negotiations, leading European industrial enterprises, often backed up by national political figures, became deeply involved in the Galileo conversation and heavily invested in their expectations of a particular share in the contracted work.

These expected geographic allocations of contracts, included a 2003 government to government agreement between Germany and Italy on Galileo operating centers. These expectations also include the shares alloted to the consortium of companies seeking the Galileo concession, which was spelled out in a December 5, 2005, agreement.

Even though the consortium appears to have dissolved following abandonment of the concession talks, the expectations and the political and economic momentum created by the process continues.

As pointed out by Jean-François Bou, acting CEO for the consortium and director of Thales’ Galileo program, “You can say it [the December 5 deal] is a commercial agreement among members of the consortium, which no longer applies. But I have a photo of the meeting and there are many public officials in the room.”

Bou characterized the EC’s change of direction as “pragmatic,” reflecting the fact that the concession process had not proceeded as quickly as expected, underestimated the complexity of the task, and faced declining opportunity for revenues from Galileo services, third-party liability issues, and other design and market risks.

In a personal aside, Bou suggested, “What we are lacking is Europe-mindedness.” His comment underscores what some have called a decline in European collective self-confidence in recent years, marked by such problems as the trans-European Airbus program, the failure to ratify a proposed European constitution in 2005, weakening in a long-standing German-French strategic alliance, immigration issues, and the economic challenges of globalization.

As the first truly European infrastructure project, Galileo has become a flagship enterprise and bellwether for Europe unity. In many ways, its fate in the coming months will provide a measure of the current state of the European political project as a whole.