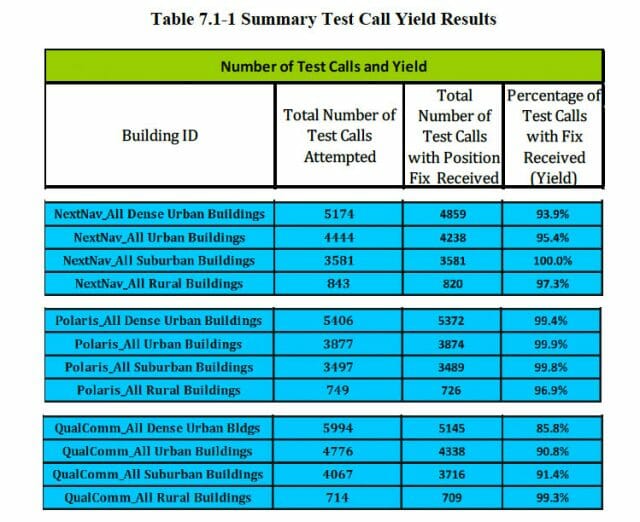 “The majority of 911 calls come from wireless phones,” wrote the FCC in its February 21 notice of proposed rule making and more and more of these calls are originating indoors where the GPS signals often used to determine location don’t reach. The FCC said reports from California indicate some 80 percent of all smart phone use occurs indoors and nearly 73 percent of the 911 calls are being made from wireless phones.

Although accuracy standards are in place to help find outdoor 911 callers, those requirements are often not enough to identify the building or floor where an emergency call is coming from. The FCC is proposing a three-step plan with initial implementation of tighter horizontal accuracy standards within two years, vertical standards in three years, and overall improved service after five years. This would be the first time the FCC would require vertical as well as horizontal information.

Although aimed at finding indoor callers, the requirements could also lead to improved outdoor location accuracy as well.

Under the proposed rules cell phone companies, that is providers of Commercial Mobile Radio Service or CRMS, would be required to provide horizontal location (x- and y-axis) information within 50 meters of the caller for 67 percent of 911 calls placed from indoor environments within two years of the effective date of adoption of rules, and for 80 percent of indoor calls within five years.

They would have three years to provide vertical location (z-axis) information within three meters of the caller for 67 percent of indoor 911 calls and for 80 percent of calls within five years. They would need to meet the requirements at either the county or emergency call center geographic level and would have to demonstrate compliance.

The call centers that handle emergency calls, more formally called public-safety answering points or PSAPs, would also need to take steps under the new rules to ensure they are accessing all the location data that is available. A phone carrier has a total of 30 seconds to provide the PSAP with information; however, the location of a caller may not be available at the beginning of the call. In that case, the call center must rebid — that is ask for updated information from the caller. A PSAP must implement a bid/rebid process before it can seek enforcement against a carrier it says is not implementing the new indoor standards.

Vendors Offer a Variety of Approaches
Potential vendors of indoor location services are confident the technology has evolved to the point that it is realistic to set indoor call standards. Cell phone providers are not convinced and insist that the technology be tested and proven before standards are set.

“Location accuracy proposals should be grounded in verified data, not aspirational target-setting,” wrote the cell phone carrier association CTIA in a February 14 letter. The group cited problems during implementation of the earlier E-911 location accuracy rules.

The standards were based on vendor representations about what could achieved, CTIA wrote, but the technology failed to develop as projected, leaving the industry at risk of enforcement actions and the FCC issuing waivers and revising deadlines. CTIA declined to comment for this article.

AT&T underscored the point in a February 14 letter: “The FCC should be careful to ensure that any proposed rules on location accuracy are aligned with proven capabilities of the current state of technology and they should set realistic accuracy benchmarks that the industry and public safety can embrace.”

Proponents of the rules have suggested that the carriers are dragging their feet because equipment upgrades will be needed.

“Obviously they are going to have to spend money,” said Bhavin Shah, vice-president for marketing and business development, at Polaris Wireless, one of the potential service providers. Polaris is proposing to help firms meet any new E911 requirements by adopting the company’s radio frequency pattern matching (RFPM) technology, which uses the unique signatures created by the combination of cell identification, network information, and observed signal strengths. Shah says the software-based technique needs no hardware changes to mobile phone or the network base stations and can be used inside buildings, particularly those with distributed antenna systems.

In 2013, at the FCC’s request, the Communications Security, Reliability and Interoperability Council III Working Group 3 (WG3) tested Polaris’ indoor location technology along with those of NextNav and Qualcomm. Qualcomm uses assisted-GPS and advanced forward link trilateration, a method that determines location using time and distance measurements from cell towers. NextNav uses the time of arrival of synchronized signals from precisely mapped beacons to determine location and differential barometric pressure measurements to determine height.

A NextNav beacon network, whose signals are synchronized at a coarse level using GPS, is fully deployed in San Francisco and initial deployments are under way in 39 other metro areas, according to the company. The firm runs the beacon network and licenses its technology, said co-Founder and President Gamesh Pattabiraman. In October NextNav announced a licensing deal with Broadcom.

Results of the tests are shown in the accompanying tables.

The test results listed in the FCC’s notice of proposed rule making were for the first generation of the NextNav system, said Pattabiraman. All of the tested technologies are in the process of being improved, the agency noted.

The phone companies’ worries not withstanding, Pattabiraman said he thought the FCC was being realistic in its proposal.

Comments on the proposal must be submitted by April 4.

The full notice of proposed rule making can be found at <http://www.fcc.gov/document/proposes-new-indoor-requirements-and-revisions-existing-e911-rules>.

Comments already submitted can be read at <http://apps.fcc.gov/ecfs/proceeding_search/input?z=z65t0>. The proceeding number is 07-114.