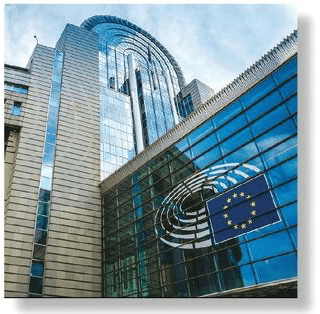 Officials representing the European Union are now publicly advancing the use of EU space assets, including the Galileo satellite-based navigation system, for military purposes. Galileo has traditionally been touted as a purely civil, purely nonmilitary system, but times and circumstances are changing.

The theme of the EU Space Week session Security and Defense was established by the introductory text that appeared in the event’s program: “The development of the European space sector has, from the outset, been linked to security, either that of the Member States or the EU itself.”

Anyone with a strategic bone in their body will have understood long ago that Galileo services represent powerful tools for military users. But now that the Galileo system is truly up and running, bought and paid for, as it were, there is no longer a need to pander to Europe’s anti-military sensibilities by painting Galileo as a “purely civilian” system. And with the perceived need for defensive capabilities on the rise, Europeans can now freely and openly embrace the obvious: “While the Galileo and Copernicus programs are essentially civil and commercial in nature, both have the potential for military use,” went the blurb.

There is no doubt that the word “security” has always had a home in the Galileo presentation, but there are really two very different topics that can be understood to fall under that heading.

First we have “Galileo security” in the sense of the security of the system itself. Galileo has clearly and rightly been recognized as an important strategic asset for Europe, so its own security has been a fundamental concern as the system has materialized. The job of making Galileo secure falls to the European GNSS Agency (GSA).

And then we have the more delicate question of using space assets in support of European security, i.e. making Galileo a tool for police and/or military operations, to be used in the defense of Europe and its allies, and offensively, against its enemies.

First, securing Galileo
“Owing to the importance of space-related activities for the European economy and the lives of citizens, achieving and maintaining a high degree of security is a key priority for the EU Space Programme.” – from the EU Space Week conference program.

Stefano Ianitti, GSA Head of Security, was on hand to explain how the GSA goes about ensuring the security of the Galileo system. His appearance came to the great delight of his gathered colleagues and other people who know his work but almost never get to see him shine in front of a “non-security-cleared” audience.

Ianitti outlined in some detail the exact structure and mode of functioning of the GSA’s security wing. “We have our Central Security Office, which is in charge of establishing security policies for physical security, personnel security, and for EU-consequent information that we manage throughout the program,” he said. “A second section, Security Requirements and Standards, is responsible for cyber security, and indeed this section is growing because of the increasing threats of this type.”

Ianitti discussed the GSA’s EU GNSS Distribution Authority, which concerns itself with cryptographic elements. And of course the GSA oversees the eagerly awaited Public Regulated Service (PRS). This includes PRS engineering and evolution, operations and service provision, in coordination with the GSMC. There is also a group concerned with the PRS user segment and access, including user equipment development under GSA-funded projects, and there is a section supporting the setup of Competent PRS Authorities (CPAs). “And finally,” Ianitti said, “We have operational demos and validation work. We have ongoing projects for testing the full operational PRS chain.”

The Galileo Security Monitoring Centre (GSMC), also run by the GSA, actually monitors the operational status of system components and takes action to address security threats and alerts. It does all of this under the close supervision of the weighty European External Action Service (EEAS).

Interestingly, after describing the GSA’s truly impressive security organization, Ianitti concluded by saying, “The GSA is ready to share our experience, our competencies, with other EU space programs.” Innocent enough to the outside observer this apparent offer to help other EU space programs (read Copernicus) with their security needs, but to some EU insiders, such a suggestion could have smacked ever so slightly of line crossing, of an agency with its delineated responsibilities eyeing the taking on of someone else’s tasks.

Then again, would not such a consolidation of competencies, a streamlining, a sharing of security staff, possibly leading to cost cutting, represent exactly what is being called for ever more earnestly across the EU community?

Philippe Rosius, head of the GSMC, is another character one does not often observe treading the boards before polite society, that is to say speaking at a free and open public forum.

“It’s not that often that the GSMC is introduced to an audience which is not solely composed of member state representatives or of security-cleared people who are already aware of what we are doing,” he noted. “So with my talk I stay unclassified, and for only ten minutes.”

GSMC is a GSA entity, independent from the operator, with two sites, he confirmed, one master site in France and a back-up, formerly located in the UK and currently being relocated to Spain, as the British remove themselves from the EU fold.

“Since the first of July 2016, we are monitoring that Galileo is safely and securely operated,” Rosius said, “providing interface for member states and access to the PRS, distributing the cryptographic keys. The PRS is not yet fully operational; we are in the ramp-up phase. The GSMC will eventually become the single access point for the member states with the PRS.

“Our world is not as secure as we would like,” he added. “We must be secure against physical and cyber threats and mitigate risks. We must protect our networks, centers, stations all around the world, to ensure the PRS is trustable.”

And then, Galileo Securing Europe
It could be argued that it would be irresponsible not to use the EU’s space assets for any and all good purposes, at a time when the EU is feeling put upon from all sides.

The wider question of using European space assets in the service of European defense was taken up by session chair Jean-Pierre Diris, head of Telecommunications and Navigation Projects at the French Space Agency. He pointed to the importance of maintaining “freedom of action and autonomy for Europe in an evolving security context”.

There would seem to be at least two very real impulses behind this phrasing. First, there are today a number of manifest threats to Europe’s actual physical security. “The list of recent terrorist events is long,” Diris said, “from Paris to Brussels to Berlin, Barcelona and Madrid, and many others. We have the migration crisis from the south. Russia has made clear its intentions near the EU’s eastern borders.”

Second, the EU has seen unprecedented political criticism expressed openly by its greatest ally (not to mention its own members), leading to a real sense of vulnerability. “Geopolitics is changing,” Diris said. “The USA is reducing its burden and is asking its allies to share more.” The result: “We in Europe must master our own security and defense.”

Evi Papantoniou, European Commission Head of Unit for Galileo and EGNOS Legal and Institutional Aspects, urged caution: “Strategic autonomy has become a buzzword for Europe. But we want to be sure we understand what it means. We don’t want to create additional tension with external allies. We can talk about sovereignty in trade and in foreign policy. We can have different points of view from our transatlantic partners. In the area of security and defense, European sovereignty means we need to take more responsibility, to share more of the burden, sharing within NATO. President Trump has called for this loudly.”

One former European Commission official, now retired, and who is not a fan of the current U.S. administration, told us, “The Americans have not been very diplomatic, but this does not mean they are wrong. Of course they are right. The Americans have been paying for our defense for decades. Why? Yes, they have drawn many economic benefits from our favored relationship, but this is not a sufficient argument for us not being able to defend ourselves.”

“We need capabilities,” Papantoniou said. “Should we rely on the Americans? What matters is that we need to be able to defend ourselves. We need autonomy as an insurance policy, in case we cannot count on our allies. We do not need to say we are autonomous vis à vis the United States, but we are complimentary, with more collaboration between EU member states, to have more freedom to act.”

It should be noted that at no point did anyone suggest or describe a specific application for Galileo in a military or security context, nor is anyone likely

to do so in an open forum in the near future. But the message was clearly that all such assets can and should be so used.

Also addressing head-on Europe’s relationship with the US was Pablo Gonzalez, representing the Aerospace and Defence Industries Association of Europe (ASD). “In order to reflect on the future in defense, it is mandatory to take into account what is going on on the other side of the Atlantic,” he said, “because usually, the Americans, we need to recognize, especially on defense, they are a step forward on us.

“In June 2018, the U.S. President made a public announcement about the creation of an independent Space Force. In space, Europe has currently an enormous amount of assets, tens of billions of dollars in infrastructure. We need to defend it. Up to now, the capability to attack in space was concentrated in one, two, three countries, but with current technologies it is possible to attack for much smaller countries, even terrorist organizations. We need to defend and be able to counterattack.

“There is a need for a different European mindset about the military use of space,” Gonzalez said. “For sure we need to work in the mid-term, we need to think about a strategic view.”

It would appear that that is exactly what the Europeans are now doing. And who can blame them? Indeed, many will be applauding them. And a sign of their serious intent is the fact that these expressions are now more open and frank than ever, as demonstrated at the EU Space Week event in Marseille. We know that the subject of European defense was virtually taboo in such settings just a few years ago, “few” being a relative term, of course. How times do change though.

(This Brussels View column by Inside GNSS’s European correspondent Peter Gutierrez was first published in the January/February 2019 issue of the magazine.)