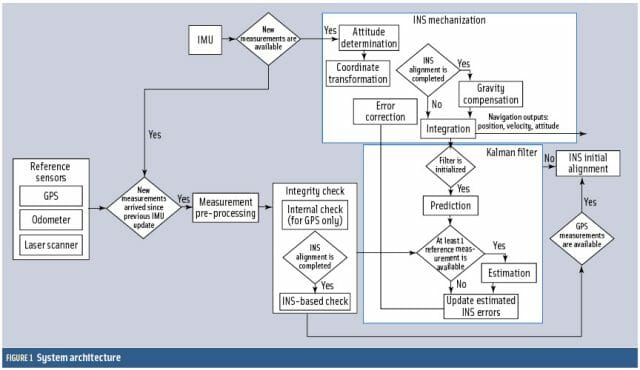 Cooperative vehicle safety applications should preferably have two-meter horizontal accuracy and six-meter vertical accuracy, all with a 95-percent availability. The solution must be developed to incorporate lower-cost sensor options, specifically, lower-cost inertial measurement units that can be generally characterized by the gyro drift of 100 degrees per hour and an accelerometer bias force of twice its mass times gravity (two milligals).

Cooperative vehicle safety applications should preferably have two-meter horizontal accuracy and six-meter vertical accuracy, all with a 95-percent availability. The solution must be developed to incorporate lower-cost sensor options, specifically, lower-cost inertial measurement units that can be generally characterized by the gyro drift of 100 degrees per hour and an accelerometer bias force of twice its mass times gravity (two milligals).

Our implementation of a cooperative vehicle safety system uses a low-latency 5.9 GHz communication link among vehicles and roadside infrastructure. This enables each vehicle to continually assess the chance of a collision. If the collision probability is high, the system may generate an in-vehicle warning for the driver, or even automatically initiate actions to help prevent the collision. A vehicle equipped with this system knows its own location and path, while it wirelessly monitors the locations and paths of surrounding vehicles.

Although GNSS satisfies the desired accuracy level in open areas where unobstructed signals are available, it fails to support the desired performance in dense urban environments. In order to achieve the set performance goals, GNSS must be augmented with other sensors.

In this article we describe a multi-sensor architecture developed to enable precise positioning capabilities in difficult GNSS environments (such as urban canyons) for cooperative vehicle safety applications. Our overall goal is to enable meter-accurate absolute positioning in dense urban environments at a low cost.

System Design: The Technologies
Our solution develops a generic inertial-aided approach in which aiding sources can include GNSS, odometer, scanning lidar, and video cameras. We present the system architecture, describe specific system components, and evaluate its performance with experimental data collected in actual urban test environments.

The integrated solution is based on generic a multi-sensor fusion architecture described in the article by A. Soloviev and M. Miller (please refer to Additional Resources). The architecture utilizes a self-contained inertial navigation system (INS) as a core sensor. Other navigation aids generally extract their navigation-related measurements from external information, which may or may not be available. When available, these externally dependent measurements are applied to estimate inertial error states and mitigate the INS output drift.

We initially derive the navigation solution from the inertial data, estimate inertial error states from the aiding measurements, and then adjust the INS outputs.

Data fusion is performed at a tightly coupled level, where observable measurements are fed to a complementary Kalman filter, and differences between aiding measurements and predictions are computed using the inertial data. This solution enables a generic formulation where adding/dropping of an aiding source is simply achieved by adding/dropping its corresponding measurement observables to/from the Kalman filter without the need to redesign the entire system architecture.

The aiding measurements evaluated as part of this effort, include a GPS receiver, an enhanced GPS receiver that is frequency- aided by an oven-controlled crystal oscillator (OCXO) for clock stability, an odometer (ODO), a video camera, and a scanning lidar.

As a result, relatively low-grade micro-electro-mechanical system (MEMS) inertial sensors can be used. This reduces the cost of the inertial sensor component by at least an order of magnitude, when compared with tactical and navigation grade sensors employed in existing commercial off-the-shelf solutions.

Based on the simulation analysis, the top two solution options were identified as GPS/INS/clock/ODO and GPS/INS/ clock/ODO/Lidar. We then tested these two further by collecting experimental data in downtown Detroit, Michigan.

System Architecture
Figure 1 (see inset photo, above right) illustrates the overall architecture of the multi-sensor fusion algorithm. Computations are implemented as a recursive procedure that is executed every time a new measurement is provided by the inertial measurement unit (IMU). When a new IMU measurement becomes available, the system updates INS navigation outputs by propagating this new measurement through the INS navigation mechanization. This includes attitude determination, coordinate transformation, gravity compensation (implemented only if INS alignment has been completed) and, finally, integration into velocity and position navigation outputs. INS position outputs serve as the overall output of the system.

System Components
Let’s take a closer look at the key components used in our candidate systems.

GPS. The GPS position solution is provided directly by the GPS receiver. Additional processing of GPS measurements includes velocity estimation to initiate the INS’s alignment, and an internal integrity check. GPS velocity is derived from carrier phase changes over time wherein the carrier phase from current and previous measurement epochs are used.

Laser Scanner. . . . Ranging pulses are sent in the scanner measurement angular range. Hence, each scan image is represented by the angular array and a corresponding ranging measurement for each angle. The current system implementation uses a laser scanner with an angular range from 0 to 180 degrees and angular resolution of 1 degree. The laser is mounted on the front edge of the roof of the test vehicle with a forward orientation and scans an approximately horizontal plane.

Kalman Filter
The Kalman filter fuses reference data and inertial data to estimate inertial drift terms or, equivalently, inertial error states. At each IMU update (see Figure 1), the filter first implements a prediction step where the IMU error states are predicted based on their previous values and a time-propagation model, also referred to as the system dynamic-state model.

Much of the testing was performed in two-day blocks with attempts to maximize the cover of the changing satellite constellation by 10-hour test sessions shifted by 4 hours between neighboring days. The data was processed off-line by the position estimation algorithm running on commercial computational software on a PC.

Conclusion
We have presented a multi-sensor fusion solution for satisfying the accuracy goals of cooperative vehicle safety applications in dense urban environments, with the system designed to operate with a lower-cost IMU. Two configurations of the system architecture — an integrated GPS/INS/clock/ODO and a GPS/ INS/clock/ODO/lidar — were tested in urban environments in downtown Detroit. Results demonstrate that the fused multisensor solution drastically improves positioning accuracy compared to GNSS-only position estimation and met accuracy goals for the majority of test trials. Future work should focus on decreasing the cost of the system while maintaining and/or enhancing the performance goals via a trade-off calculation of the optimal sensor set based on performance-per-cost.

Acknowledgment
This article is based on a paper presented at the Institute of Navigation ION GNSS 2010 conference in Portland, Oregon.