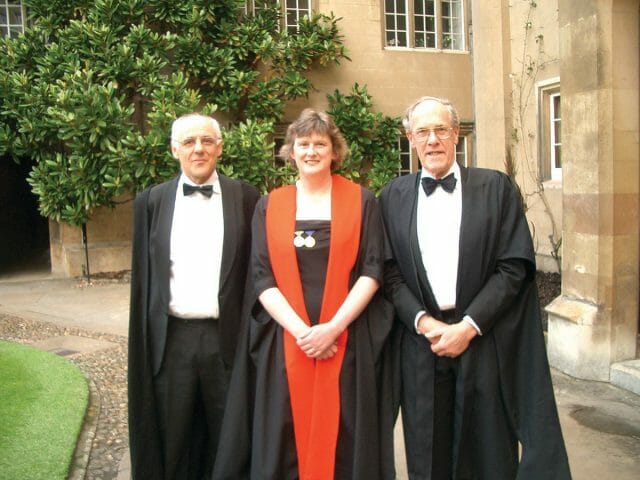 In 2005, Alison Brown was the first Sidney Sussex College woman alumna to be named as an honorary Fellow in recognition of her distinguished technical contributions. Pictured here with Keith Glover, now head of engineering at Cambridge University, who taught Brown control systems engineering, and Donald Green, her director of studies while she was an undergraduate.

On display in the Smithsonian’s “Time and Navigation” exhibit in Washington D.C. is the world’s first GPS-enabled cell phone. It was developed in 1995 by NAVSYS Corporation, a Colorado GNSS and inertial R& D company, as part of the push to build a national emergency notification system for mobile users, E911.

On display in the Smithsonian’s “Time and Navigation” exhibit in Washington D.C. is the world’s first GPS-enabled cell phone. It was developed in 1995 by NAVSYS Corporation, a Colorado GNSS and inertial R& D company, as part of the push to build a national emergency notification system for mobile users, E911.

Alison Brown, who founded NAVSYS in 1986, attended the opening of the exhibit last year. “We’re honored to be a part of this exhibit and for the awareness it creates of how much GPS technology has helped advance many of the other technologies we use today,” she said of the event.

Brown, CEO and majority owner of the company she started, holds nine patents and has indeed helped advance some of those technologies and driven some key innovations in GNSS — among them the Federal Aviation Administration’s WAAS, the GPS Wide Area Augmentation System.

The Edinburgh, Scotland, native had just about the earliest exposure to engineering possible. When she was a child, her electrical engineer father used to drive Alison and her brothers to school each morning and entertain them with stories about his work. These included building inertial navigation systems for the Ariane space launches, designing antenna stabilization for shipboard communications, inertial navigation for aircraft carrier landing for the British Harriers, and mechanical moving map systems.

Fascinated by these stories of practical applications of navigation technology, she decided to study engineering in college. That wasn’t easy for women in the 1970s and her father was “dead set against it,” she said in a 2006 Colorado Springs Gazette interview, Brown recalled his concern about the hard time she was sure to experience.

“He cut a deal with me. If I could get a scholarship to university as an engineering student he would support my decision.”

She found one from Courtaulds, a venerable UK engineering firm, and entered Sidney Sussex College, Cambridge. After her first degree, she emigrated to the United States and earned a masters degree from the Massachusetts Institute of Technology followed by a doctorate from the University of California, Los Angeles. Then she started the company she still runs — so, her high risk/high reward strategy paid off.

Encountering GPS
Let’s back up a little — to Brown’s first exposure to satellite navigation.

As part of her engineering degree in 1979, she joined a precision surveying research program that used the U.S. Navy’s TRANSIT navigation satellites. The summer project, “combined my love of the outdoors with my love of technology,” Brown said.

But her real professional turn toward GNSS technology occurred a few years later. While completing a master’s degree in aeronautics and astronautics at MIT, Brown was named a Fellow at the nearby Charles Stark Draper Laboratory . There she used GPS in her research on precise attitude determination for space vehicles. This work became the subject of her masters’ thesis, and Draper Lab later received a patent for the design.

Success built on success, as Brown designed and tested the first GPS receiver for defense contractor Litton Industries while she worked on her doctorate in mechanics, aerospace, and nuclear engineering at UCLA. As a Litton Fellow, Brown developed navigation algorithms and was responsible for the design and testing of the LTN-700, one of the first GPS navigation sets for commercial aviation. In 1984, she worked on the first GPS automobile installation for Chrysler’s “car of the future.”

LocatorNet and WAAS
Brown taught short courses on GPS through UCLA while working on her doctorate, the first GPS research that had been done at the university.

It was 1986, and Brown felt ready to take the entrepreneurial leap of founding her own company: NAVSYS. This was partly due to another leap she took that same year — getting married. Her new husband, fellow engineer Bruce Johnson, was assigned to teach physics at the Air Force Academy near Colorado Springs, and Brown decided to try consulting in their new home.

“NAVSYS grew out of my consulting work and subsequent government contracts that I won for performing GPS research,” she said.

LocatorNet, the technology featured in the Smithsonian exhibit, was an early NAVSYS project. A GPS-enabled cellular phone location system, it was used to perform the first “Mayday” trials for enhanced-911 (E911) calls. LocatorNet used a networked snapshot approach for reducing time to first fix (TTFF), the amount of time needed for a receiver to acquire a signal and calculate a position.

This demonstrated to the Federal Communications Commission (FCC) — the agency proposing the automatic caller location requirement for mobile phones — that GPS could provide accurate location information on 911 calls. NAVSYS later developed GNSS software-defined radios (SDR) for acquiring and tracking, as well as simulating, GNSS signals. The company also worked on developing pseudolite techniques that can be used for positioning when GNSS signals are jammed or unavailable.

On another track, NAVSYS developed algorithms and equipment that made it possible for geostationary satellites to rebroadcast GPS signals. This work contributed to WAAS and another satellite-based augmentation system, the Japanese Multi-functional Satellite Augmentation System (MSAS), which improve GPS accuracy and enable aircraft to rely on GPS for all phases of flight.

About this time, Brown got involved in another project, which went a long ways toward popularizing GNSS within the industry and user community. In 1987, just four years after President Ronald Reagan decided to make GPS more widely available to civil users, the Institute of Navigation’s relatively new satellite navigation division organized its first GPS conference in Colorado Springs.

Brown poured a considerable amount of energy into organizing the program, the meeting spaces, and some very memorable networking events. One year the conference rented an entire shopping mall with a skating rink, another year they went to the Flying W Ranch for a cowboy-inspired evening, and later a cave in Colorado Springs where ION threw a party.

Brown currently leads work on the GPS Jammer Location System (JLOC), under contract with the National Geospatial-Intelligence Agency. Through a secure network, JLOC feeds GPS interference information through a dedicated portal on FalconView, a mapping software. This military tool is obviously attractive to civilians as well, and a commercial version for detecting, alerting and geolocating interference is under development.

Her achievements for the military earned Brown the United States Air Force Decoration for Meritorious Civilian Service in 2003, and she sits on the Board of Trustees of the National Defense Industrial Association (NDIA).

Business and Women
As the owner of a small business dependent on global markets and federal dollars, Alison Brown has gained expertise and savvy beyond pure engineering. She actively promotes the welfare of small businesses and takes a lead in articulating their concerns across a breadth of industries. In 2005 Brown was recognized as “Entrepreneur of the Year” by Colorado’s Celebrate Technology, an event geared to foster a positive cli-mate for innovation.

In addition to activities in her local area, she serves as the volunteer chair of the five-member Small Business Regulatory Fairness Board for the Rocky Mountain region. It’s one of 10 groups that serve as official channels for complaints about unfair or burdensome federal regulatory enforcement.

As a pioneer woman in engineering, Brown promotes women in science and technology and women’s leadership opportunities more broadly.

An advocate for encouraging young women to enter the science and technology fields, she believes that “youth education is essential for the future of engineering innovation in the U.S. The next generation’s skills will determine how — or if — we will maintain preeminence in technology development.

“I may be prejudiced,” she adds, “but I also believe that some of the best engineers are women! It’s important for all of us to serve as role models and encourage more girls to consider engineering. It’s a fun, rewarding and creative career path.”

To pass on the same spark of inspiration and thrill of discovery she experienced. Brown participates in her local Colorado Coalition for Girls in STEM (Science, Technology, Engineering and Math) community events and other mentoring projects led by women who have succeeded in STEM fields. She has hosted workshops on GPS and geocaching, LEGO design, and a 3D printing design competition, and joined others in starting a local GPS Waymarking project.

WuffIT and the Hunt
It seems that most things concerning Alison Brown eventually lead back to GNSS technology innovation — including her passion for traditional fox hunting.

As a hobby, she worked with a student design team from the University of Colorado, Colorado Springs (UCCS) Bachelor of Innovation program on a prototype GPS collar for tracking hounds on while hunting.

The result is WuffIT, a GPS-based tracking system comprised of a collar unit and a smartphone app. This keeps hounds and hunters synced during fox hunts extending over a large area. Portable navigation device manufacturer Garmin International later released a new product with this feature. The hunt is an apt metaphor for the key trait that has defined Alison Brown’s engineering career: carefully identifying an elusive target — or engineering problem — and galloping towards it with precision and vigor.