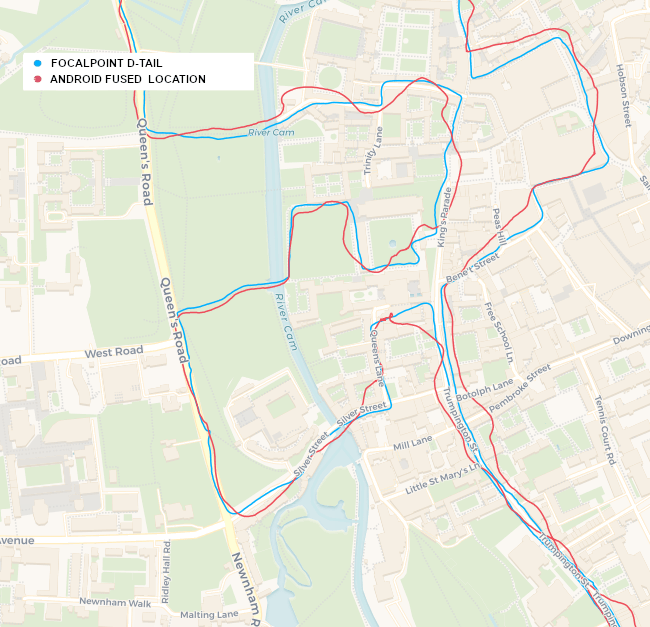 One may well ask, when doesn’t it?

That aside, some controversy has arisen in the world of competitive running, and self-competitive running as in Personal Bests, or PBs. Runners find their fitness trackers and watches don’t necessarily tell them the truth in terms of distance travelled. In fact, they very rarely tell the absolute truth. Which matters.

Focal Point Positioning, a relatively new Cambridge, UK company with innovative ways of extracting more sensitivity and accuracy from sensor-fused GPS signals, entered the discussion with its D-Tail device. D-Tail is designed to improve the performance and accuracy of activity tracking apps and LBS analytics.

The technique involves a human-motion modeling system that can accurately track users in three dimensions using GNSS signals with the inertial sensors in their smartphone or wearable devices. This produces a precise trace of the user’s motion, better than the detail and accuracy provided by dead-reckoning and Wi-Fi fingerprinting techniques.

Runners are getting ticked at their watches. Purchased at a premium to aid focused training with precise heart rate, pace, speed and distance data, they often don’t deliver at the accuracy level required. Athletes use the data to govern their training, shape performance and shave precious seconds off race times.

The typical piece of GPS wearable equipment downloads satellite signals roughly every 5 seconds. The tracking algorithm then draws a line between each successive pair of dots. This may not reflect the reality of distance run, particularly when turning corners or following a curve. But more worryingly to close watchers of their own time and distance, the GPS positions can be inaccurate, particularly in urban areas susceptible to multipath.

Even wearables and mobile apps employing both GPS and sensor fusion, taking advantage of the accelerometers, gyroscopes and compass in a smartphone, can get confused by runner movements and output a false reading.

When a staffer entered the Cambridge Half Marathon, Focal Point strapped a standard Google Pixel phone running Android Fused Location and its D-Tail tracker to her arm and took her to the starting line.

The map above shows how the two devices saw her run.

“Apart from making Lucy look like she was slightly drunk, swam across the river Cam a number of times and charged through several walls and gardens, the inaccurate timing and positioning from the regular tracker hampered her ability to run her optimum race.” This comment from the company blog post, titled “Here’s how badly your fitness tracker is lying to you.”

The Details in the D-Tail

D-Tail technology uses a machine learning-based human motion modeling to build a centimeter-accurate view of movement through space, enabling precise measurement of location, pace and gait. The motion modeling can provide a critical third piece of information to help determine whether the compass data or the GPS data are in error when they disagree. D-Tail operates at an extremely low energy-requirement, removing the trade-off between accuracy and battery life that bedevils other tracking systems.

The technique takes the form of an application- or OS-level software product for smartphones and wearables. D-Tail is designed as a complement to Focal Point’s core technology, S-GNSS or supercorrelation GNSS, but also works independently on existing devices. It can run as a cloud-based solution or in real time on devices at the application or hardware level.

It operates at 200 times the measurement rate of GPS, according to the company, and provides a detailed trace of user motion across four dimensions.

From Super to Ultra

S-GNSS is a chipset-level software product for mobiles, wearables and vehicles. It is designed for modern system-on-a-chip silicon architecture used by consumer GNSS receivers. It requires no extra hardware or infrastructure, and fits into existing architecture as a software upgrade.

The supercorrelation technology enables many seconds of coherent integration while the receiver system is undergoing dynamic motions, thus significantly enhancing sensitivity, integrity, accuracy, and robustness, according to the company. Supercorrelation separates line of sight and non-line of sight signals during the correlation process, providing multipath mitigation, anti-spoofing and signal arrival-angle determination.

The technique was presented in an ION GNSS+ 2018 paper, “Supercorrelation: Enhancing the Accuracy and Sensitivity of Consumer GNSS Receivers with a DSP Upgrade,” by Focal Point founder Ramsey Faragher and colleagues.

From the paper abstract: “These new signal processing stages change the correlators from the ‘textbook’ PRN sequences into a particular pattern of phase-correcting sequences that account for receiver motion and local clock variations. The resulting Supercorrelator couples strongly (coherently) to the line-of-sight energy coming from each satellite, but simultaneously attenuates energy arriving at the antenna from non line of sight directions. The result is high gain on the line of sight energy, and the mitigation of multipath interference before the creation of the correlation peak.”

Focal Point has also developed an Ultracorrelation technique, which can extend the coherent integration time out to 5 seconds and more, even on moving low-cost consumer devices with uncompensated crystals.

In January 2020 at the ION International Technical Meeting, Faragher received the organization’s Per Enge Early Achievement Award for “outstanding innovations in mobile positioning and navigation, and in particular for pioneering the revolutionary SuperCorrelation technology.”

Inside GNSS plans to publish in coming months a full technical article on supercorrelation and/or its combination with 3-D mapping-aided GNSS.