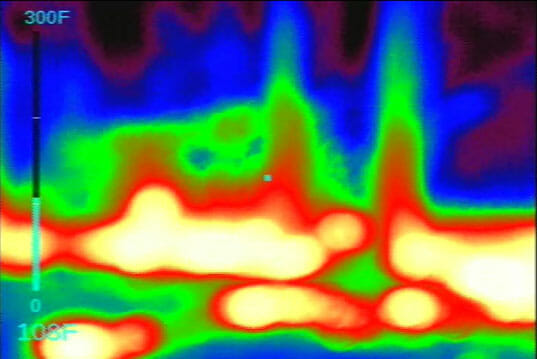 Large wildfires can create their own weather and a dynamic, uncertain environment, and that is one of the reasons they’re so dangerous, says Manish Kumar, an Associate Professor in the Department of Mechanical, Industrial, and Manufacturing Engineering at the University of Toledo.

Large wildfires can create their own weather and a dynamic, uncertain environment, and that is one of the reasons they’re so dangerous, says Manish Kumar, an Associate Professor in the Department of Mechanical, Industrial, and Manufacturing Engineering at the University of Toledo.

Through the PFI:AIR-TT: Situational Awareness during Fire and Emergency (SAFE) project, Principal Investigator Kumar and his team of researchers are working to give firefighters a new tool to help them flight these menacing flames, a tool that would provide them with the situational awareness they need to locate hot spots, determine the fire’s path and extinguish the fire as quickly as possible.

That tool is an Unmanned Aerial System. The team, which consists of students from the University of Toledo and the University of Cincinnati, The Cincinnati Fire Department and the West Virginia Division of Forestry, began working on the project about five years ago, and received a grant from the NSF earlier this year for the project’s current phase: completing the prototype. The prototype is expected to be ready by the end of next year.

“Wildfires have become very frequent and they have economic effects. They have an effect on people’s lives and property,” Kumar says of the importance of this project. “One of the biggest challenges when fighting wildfires is the ability to obtain real time, accurate information, and this is where we want UAVs to help.”

What the Technology Can Do
Today, there are three ways firefighters gather information when dealing with a wildfire: Manned lookout towers, manned aircraft and satellites. They all have their limitations, Kumar says, with lookout towers and manned aircrafts both costly options that put lives in danger. While the satellite option is safer, data processing is slow. The data may come in incrementally for a period of 10-12 hours, a timeframe that’s much too long when you’re battling a wildfire.

The UAV Kumar and his team are building represents a safe, affordable option, he says. The UAV will weight 5-6 pounds, and will be something every incident command team can carry onto the field. The UAV will find the hot spots, relay that information to the command team as a video in real time and provide the location of the hot spot on a mapping service.

“The UAVs will map out the area and tell you on the map exactly where the hot spots are,” Kumar says. “Once they have this information, they can use the real time data in fire propagation algorithms. This will help them more accurately predict where the fire is going. The incident commander teams will not only have knowledge of where the fire currently is, but how it will propagate.”

The UAV will also be able to provide an aerial view, Kumar says, as well as multi-modal information. Response teams not only need to know about hot spots, but they also need to know about vegetation and topography in the area. That kind of information can help them predict how the fire will spread, and they’ll get that information all in one video.

The Challenges
As with any research project, Kumar and his team face several challenges. One of the biggest is data processing, Kumar says. They have to figure out the best way to process all the various data points in real time, including video data, data from the infrared sensors as well as the navigational data they’ll need to combine to accurately pinpoint the fire’s location on Google maps. And they’ll need to find a way to make this happen while out in the field.

They also need to make it user-friendly, Kumar says. Firefighters don’t want to spend a lot of time and money learning how to use the system, and that means most of the navigation control will need to be done autonomously. Beyond that, the data won’t do firefighters much good if they can’t interpret it, making it vital to find a way to present the data in a way that’s easy to understand.

Other Uses
Wildfires represent only one aspect of this project, Kumar says. This UAV will be able to help in a variety of other operations, including search and rescue missions and battling structural fires.

During a large structural fire, for example, firefighters can use the UAV to complete the 360 degree surveillance of the building. This will save the team time and resources, while also providing video and real time data that can help the commander make a decision about how they should approach the fire.

The team is also collaborating with the Cincinnati Fire Department to find ways to use this UAV during search and rescue missions, Kumar says. Instead of using K-9 units to search for a scared, lost child in the woods, the UAV could autonomously search the area, using an infrared camera to pick up body heat from a human. In the next few months, the collaborators will demonstrate how long it takes a UAV to find and deliver video information, vs how long it takes for a K-9 unit to find someone who’s lost in the woods.

Next Steps
As Kumar and his team work to build the prototype, they’re also waiting to receive permission to fly from the FAA. They’re working with the Ohio/Indiana UAS Test Center to obtain the proper certification, something they hope to have by February.

In the meantime, Kumar is excited to be part of this project, and knows the work his team is doing today could help save lives in the future, whether the UAV is providing situational awareness during a wildfire, a structural fire, a search and rescue mission or any large-scale disaster.

“Real time information can save lives in these situations. This will be a game-changer for those who fight wildfires,” Kumar says. “It’s an excellent tool to be used for these types of situations. I think it’s time we start working toward making these systems possible.”

As part of the challenge, the UAV had to search and identify a specific target, and then transmit the target’s geo-location to a ground station. The team of six graduate and undergraduate students took home $8,000 in prize money, which they’ll use to participate in future competitions.