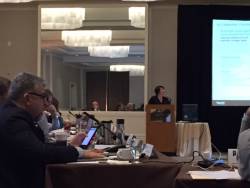 A $2 billion lawsuit with implications for the ongoing spectrum fight between the GPS community and would-be terrestrial telecom provider Ligado Networks has been stayed — set aside through mutual agreement for nine months — according to court documents.

The lawsuit filed by Harbinger Capital, a firm founded by hedge fund manager Phil Falcone, alleges “massive fraud” by Apollo Global Management LLC and others when they sold the satellite company SkyTerra to Harbinger.

Harbinger renamed the firm LightSquared after it bought it and then sought to rezone its satellite frequencies to support a powerful terrestrial broadband network — a plan government tests later showed would overload the vast majority of GPS receivers. The Federal Communications Commission (FCC) set aside the LightSquared request in 2012 and the company filed bankruptcy shortly thereafter. It emerged from bankruptcy in 2015 with a new plan and new ownership structure — though Falcone retained a stake. The company changed its name soon thereafter to Ligado Networks and continued its quest to use its frequencies for a broader array of services including connectivity to the Industrial Internet of Things (IIoT).

In its complaint Harbinger alleges Apollo concealed private test results showing the planned terrestrial network would cause crippling interference to GPS and was unlikely to be approved.

Why Stop Now?
Falcone’s stake in Ligado is part of what made the lawsuit surprising. Though Harbinger said the lawsuit had “nothing to do with Ligado” the complaint seemed at odds with Ligado’s efforts to win approval for its modified terrestrial strategy. That new plan faces continuing opposition from the GPS community and increasingly from other interests impacted by a proposed deal allowing use of frequencies now used by the National Oceanic and Atmospheric Administration.

“I think if the allegation’s made, that the original license was based on fraudulent conduct, and the FCC decides to look into that issue — then it will be very hard, while that was ongoing, for them to grant a modification to the license,” said Tim Farrar, founder of TMF Associates. Farrar is a technology consultant specializing in the satellite industry who has followed LightSquared/Ligado closely.

The handwritten stay, which was agreed to by “all parties,” puts off action in the lawsuit until December 31 of this year. The preliminary conference is now set for January 2, 2019.

The delay does suggest that there has been a change in circumstances, said Farrar. “You can get extensions of a few weeks but you don’t get extensions of nine months. So it would imply that something has happened.”

The real question, Farrar said, is why Harbinger would agree to delay its case?

Other sources following the Ligado-GPS issue suggested the delay could be connected to Ligado — specifically that the case was put on hold so as not to undermine prospects for approval.

Farrar agreed that was a possibility — but said it was only one of many possibilities.

“For example they (Apollo) could have showed Harbinger what they planned to file, which might have made all sorts of accusations against what Harbinger did too,” he said — stressing that the idea was strictly speculation on his part. “They (Harbinger) might have thought better of it.”

ExCom to Meet
The development came just weeks ahead of the Trump administration’s first meeting of the National Executive Committee for Space-Based Positioning, Navigation, and Timing (PNT). Co-chaired by the deputy secretaries of the Department’s of Defense and Transportation, the ExCom is the interagency body weighing decisions about PNT technology and policy.

The ExCom is supported by the PNT Advisory Board — a panel of the nation’s leading PNT technology and policy experts. The Advisory Board decided in November to write a letter to the ExCom opposing Ligado’s plans — meaning the Ligado issue is likely to be discussed by the ExCom during its March 22 meeting.

The board’s decision to weigh in was based in part on a November 2017 presentation by Ligado that was notable for what it didn’t say. The company did not know how many ground stations it would need to serve its planned market nor did it know their distribution, said Valerie Green, the firm’s executive vice president and chief legal officer.

It also was too soon to offer details on antenna types, she said.

“I can tell you that the antennas will be developed to protect GPS, but in terms of where we are with that, it’s just too soon in the process to know exactly what the antenna will look like,” Green said.

Ligado also did not have a propagation model at the time of the presentation. In fact, the way Green described it, it was not clear the firm had the ability to establish if their plan would protect GPS.

“The appropriate propagation model to be used to evaluate whether or not the proposal that we currently have actually will protect GPS — that’s to be determined by the NTIA (National Telecommunications and Information Administration) and the FCC who are the government agency experts on those sorts of things,” Green said.