UK eLoran Now in Operation to Back Up GPS - Inside GNSS - Global Navigation Satellite Systems Engineering, Policy, and Design 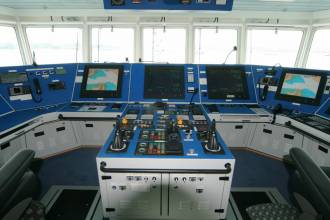 Technology to counter the threat of GNSS jamming is now available at Dover and along the east coast of the United Kingdom as the island nation continues to implement an enhanced Loran (eLoran) system that is setting an example for the world.

Technology to counter the threat of GNSS jamming is now available at Dover and along the east coast of the United Kingdom as the island nation continues to implement an enhanced Loran (eLoran) system that is setting an example for the world.

The General Lighthouse Authorities (GLAs) of the UK and Ireland announced Friday (October 31, 2014) the initial operational capability of UK maritime eLoran. Seven differential reference stations are now in operation to provide additional position, navigation, and timing (PNT) information to ships fitted with eLoran receivers, ensuring their safe navigate in the event of GPS failure in one of the busiest shipping regions in the world, which 200,000 vessels are expected to cross every year by 2020, according to the GLAs.

GPS currently plays a fundamental role in delivering the PNT data that ships, which carry 95 percent of UK trade, rely on for safe navigation. The European Commission estimates that an €800 billion chunk (US$1 trillion) of the European economy currently depends on GNSS services.

GNSS signals are vulnerable to interference and both deliberate and accidental jamming, which is causing increasing concern because of the wide availability of GNSS jammers online for $50 or less that are capable of causing complete outages across all models of receivers currently on the market. Loss of this GNSS service, even for a short time, can put vessels, cargo, lives and the environment at risk, navigation officials say.

Based on longwave radio signals entirely independent of GPS, eLoran can provide navigation information for vessels as well as the timing data necessary to maintain the power grid, cell phones, financial networks, and the Internet in the event of an outage.  Unlike satellites, eLoran signals can also reach inside buildings, underground, and under water.

The UK is the first in the world to deploy this technology for shipping companies operating both passenger and cargo services. The rollout was approved by the Department for Transport in 2013. Led by the GLAs of the UK and Ireland, deployment of the system involved replacing the existing radio receiver equipment in two prototype reference stations at Dover and Harwich, and the creation of five new reference stations in the Thames, Humber, Middlesbrough, Firth of Forth, and Aberdeen.

Captain Ian McNaught, Deputy Master of Trinity House, said of the eLoran IOC, “Demands on marine navigation continue to increase with growing congestion and awareness of the vulnerability of GPS is growing. . . . The achievement of Initial Operational Capability for the system at Dover and along the East coast of the UK is a significant milestone, providing for improved safety aboard appropriately equipped vessels. The maritime industry would now benefit from the installation of eLoran receivers on more vessels to take advantage of improved navigational safety.”

McNaught recommend that telecoms, finance, energy and other industries that are subject to significant issues caused by the loss of timing signal provided by GPS take advantage of the enhanced reliability now available to address “the over-dependence of key national infrastructure on vulnerable satellite systems.”

Grant Laversuch, head of safety management at P&O Ferries, which installed the technology as a test system aboard the ferry Spirit Of Britain at Dover said, “Pinpoint-accurate positioning and navigation is especially vital for us because we operate in the busiest shipping lane in the world and Spirit of Britain is one of the largest ships ever built for the Dover-Calais route. Our ships had occasionally experienced loss of satellite signal; so, we trialed eLoran as a crucial ‘back-up’ to ensure we can navigate accurately at all times and provide an extra guarantee of passenger safety. We welcome the news that Britain is leading the way in guaranteeing safe shipping lanes by deploying this technology across the coastline.”

Dr Geoff Darch, principal consultant at international design, engineering and project management consultancy, Atkins, said, added that eLoran is “a great example of a technology that could provide an important back-up to satellite navigation systems should these become damaged or degraded by severe space weather.”

Several nations around the world are consulting with the GLAs to benefit from its knowledge and experience of eLoran. South Korea, for example, has indicated an interest in establishing an eLoran alliance with the UK as it pursues its own rollout of differential eLoran reference stations and new eLoran transmitters based on the latest technology. In 2012, South Korea was the victim of a 16-day GPS jamming attack by North Korea.@font-face {
font-family: "Cambria";
}p.MsoNormal, li.MsoNormal, div.MsoNormal { margin: 0in 0in 0.0001pt; font-size: 12pt; font-family: "Times New Roman"; }div.Section1 { page: Section1; }