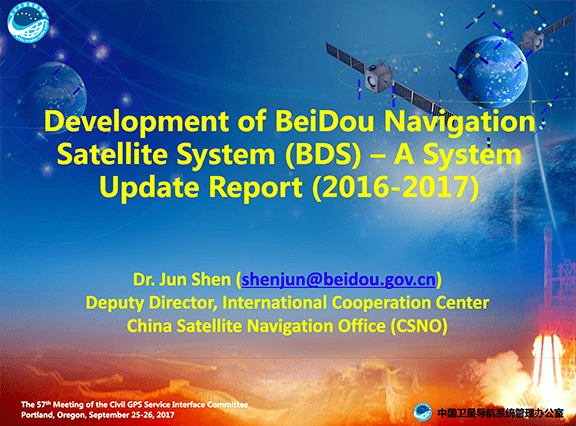 Big news came out of Washington, D.C. earlier this week regarding BeiDou and GPS as the United States and China have negotiated compatible signal characteristics that will both protect and enhance service for users of the U.S. Global Positioning System (GPS) and the equivalent Chinese system.

The achievement resulted from several years of discussions between U.S. and Chinese experts in global navigation satellite systems (GNSS). The consensus to make the systems compatible and interoperable at the user level will mean better service for users of both systems worldwide, according to the U.S. Department of State.

The Department of State’s Bureau of Oceans and International Environmental and Scientific Affairs Office of Space and Advanced Technology represents the U.S. in the ongoing U.S.-China GNSS Cooperation Dialogue, which began in May 2014 and covers various topics. Compatibility of the Chinese BeiDou Navigation Satellite System (BDS) with GPS has been a core focus of the discussions.

The U.S.-China Joint Statement on signal compatibility and interoperability, dated December 4, notes that in 2014, the China Satellite Navigation Office and the Office of Space and Advanced Technology, U.S. Department of State, jointly established the U.S.-China Civil GNSS Cooperation Dialogue, a bilateral government-to-government mechanism to promote cooperation between the U.S.’s GPS and the Chinese BeiDou Navigation Satellite System (BDS).

Over the past three years, representatives and experts from both sides have studied and discussed various topics related to civil service provision and user applications, among which BDS compatibility and civil interoperability with GPS is one of the core focus areas. Both sides have carried out extensive in-depth analysis, and have engaged in persistent discussion and coordination. As a result, the two sides have reached the following consensus conclusions regarding compatibility and interoperability between GPS and BDS:
1. Consistent with the bilateral frequency compatibility coordination completed in 2010, GPS and BDS are radio frequency compatible under the framework of the International Telecommunication Union (ITU); and
2. The GPS L1C and BDS B1C civil signals, using two different types of multiplexed binary offset carrier (MBOC) waveforms are interoperable, which means users can receive better service by jointly using these civil signals without a significant increase in receiver cost or complexity.

This presentation focused on system development, international cooperation and near-term plans, and covered updates on the BD-2 system constellation, the development of the BD-3 system, as well as both ground-based and satellite-based augmentation systems. The CSNO report also addressed the international GNSS Monitoring & Assessment System (iGMAS), the development of a national integrated PNT system, and cooperation between China and Russia.

At the start of this year, many of these topics were discussed in a U.S.-China Economic and Security Review Commission staff research report. For more details on “China’s Alternative to GPS and its Implications for the United States,” written by Jordan Wilson, policy analyst in security and foreign affairs at the U.S.-China Economic and Security Review Commission, read the story on the Inside GNSS website.