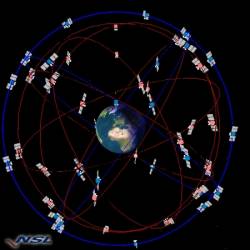 Representatives of the United States and the European Community (EC) meeting October 23 in Washington, D.C., reaffirmed their commitment to the 2004 cooperation agreement on Galileo and GPS in the first plenary session convened under the agreement.

Representatives of the United States and the European Community (EC) meeting October 23 in Washington, D.C., reaffirmed their commitment to the 2004 cooperation agreement on Galileo and GPS in the first plenary session convened under the agreement.

A joint statement summarized the activities of four bilateral working groups, including technical and trade issues. The plenary session also discussed various issues related to the emergence of global and regional satellite navigation systems in addition to GPS and Galileo.

The Working Group on Compatibility and Interoperability (WG-A) described progress on implementing an improved common civil signal — referred to as L1C on GPS and E1 Open Service on Galileo — that employs a multiplexed binary offset carrier (MBOC) waveform. In line with the 2004 Agreement, the Galileo test satellite GIOVE-A began emitting the signals described in the annex of the 2004 Agreement in 2006 and since April 2008 GIOVE-B has been transmiting, in addition, the new MBOC signal and a GPS-Galileo time offset.

The Working Group on Trade and Civil Applications (WG-B) discussed its success in opening channels of communication to raise and respond to questions related to market access and fair trade, addressing barriers to the development of the global market for satellite navigation services, equipment, and applications.

A working group designed to enhance cooperation for the next generation of GPS and Galileo (WG-C) discussed possible short- and long-term priorities in order to prepare its first work plan. In the first stage, this group plans to address safety of life services including GPS space-based augmentation systems such as EGNOS and the GPS Wide Area Augmentation System (WAAS) as well as Galileo and GPS III constellations. The group will also discuss interoperability of new civil signals Co-chairs of the Working Group on Security (WG-D) presented plans for future work, but no details were released in the joint statement.

The plenary meeting took place at the United States Naval Observatory (USNO) in Washington D.C., which maintains the atomic time standard for the United States and the Global Positioning System. USNO headquarters hosts joint U.S. and EC monitoring stations for both GPS and Galileo.