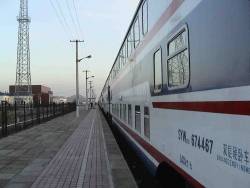 Trimble and the China Railway Eryuan Engineering Group Co. Ltd. (CREEC), the third largest civil construction enterprise in the world, have signed a definitive agreement to form a 50/50 joint venture in China.

Trimble and the China Railway Eryuan Engineering Group Co. Ltd. (CREEC), the third largest civil construction enterprise in the world, have signed a definitive agreement to form a 50/50 joint venture in China.

The new venture, to be based in Chengdu (the capital of China’s Sichuan province), will leverage Trimble’s commercial positioning, communications, and software technologies and CREEC’s expertise in rail design and construction to develop and provide digital railway solutions that address design, construction, and maintenance for the Chinese railway industry. The companies expect operations to begin after regulatory approval from the Chinese government.

"The next stage of China’s railway development will embrace digital solutions, which require higher standards in survey, design, and construction and creates new opportunities at the same time. Thus, the cooperation between the two parties is in line with the long-term development strategy under such prospects,” said Qi Baorui, chairman of CREEC.

Under China’s $585 billion economic stimulus program announced a year ago, investment in transportation infrastructure has soared.An article in the New York Times last month said growth in investment for that nation’s railroads had grown more than 103 percent for the first eight months of 2009 with an estimated $50 billion spent on China’s nationwide high-speed rail network alone.

“We are extremely pleased to be partnering with CREEC, a world leader in railway design and management,” said Steven W. Berglund, Trimble president and CEO. “With China’s rate of economic development and modernization, infrastructure projects in the area of transportation are national priorities. By leveraging our respective capabilities, we believe the joint venture will create innovative digital solutions that will increase efficiency and productivity for the railway industry.”

This is the second JV initiative in China that Trimble has implemented this year. Previously, the company announced plans for another 50/50 partnership with the China Aerospace Science & Industry Academy of Information Technology (CASIC-IT) to develop, manufacture, and distribute Compass GNSS receivers and systems in
China.