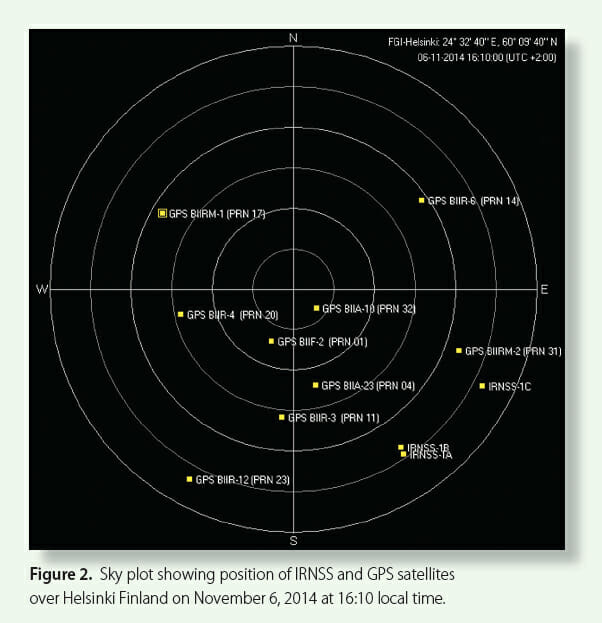 The Indian Regional Navigation Satellite System (IRNSS)] is designed as a stand-alone regional navigation system with a primary service area extending up to 1,500 kilometers from the Indian land mass. Finland lies north of 60°N latitude more than 5,000 kilometers away from India, as shown in Figure 1 (see photo at the top of this article).

The Indian Regional Navigation Satellite System (IRNSS)] is designed as a stand-alone regional navigation system with a primary service area extending up to 1,500 kilometers from the Indian land mass. Finland lies north of 60°N latitude more than 5,000 kilometers away from India, as shown in Figure 1 (see photo at the top of this article).

Three IRNSS satellites are currently operational: two inclined geosynchronous orbit (IGSO) satellites, PRN 1 (1A), PRN 2 (1B); and one geostationary satellite, PRN 3 (1C) launched on October 16, 2014. Seven satellites will comprise the full constellation, which is expected to be complete in 2015.

In October 2014, the Indian Space Research Organization (ISRO), which has responsibility for the IRNSS program, published an interface control document for the IRNSS standard positioning service. Soon after, researchers from the Department of Navigation and Positioning of the Finnish Geodetic Institute (FGI) successfully acquired, tracked and decoded the navigation data offered on the L5 frequency (1176.45 MHz) from all three available IRNSS satellites. The IGSO satellites were used in a multi-GNSS positioning solution along with GPS satellites. (The IRNSS GEO satellite PRN 3 (1C) had its “ALERT” flag set; so, its navigation data was not used in computing the final position.)

FGI has developed a multi-GNSS software-defined receiver (SDR) platform called FGI-GSRx, which is used for the analysis and validation of novel algorithms for optimized navigation performance. The basic version of FGI-GSRx operates on an open-source software receiver platform described in the publication by K. Borre et alia listed in the Additional Resources section near the end of this article. The original version of the FGI-GSRx has been considerably expanded and is compatible with GPS, Galileo, GLONASS, BeiDou, and now IRNSS signals, offering a truly multi-GNSS architecture.

On November 6, 2014, beginning at 16:10 local time, we used an active L1/L2/L5 antenna capable of receiving GLONASS, GPS, and satellite-based augmentation signals from a roof-top location in combination with a highly configurable dual-frequency GNSS RF front-end to capture and store GNSS signals in digitized format (described in Table 1) for post-processing by the FGI-GSRx software receiver platform. In the captured data, the three IRNSS satellites (PRN 1, 2 and 3) and 9 GPS satellites (PRNs 1, 4, 11, 14, 17, 20, 23, 31, and 32) are visible, as shown in the sky plot of Figure 2 (see inset photo, above right).

In the FGI-GSRx stored RF samples at intermediate frequency (IF) are processed as shown in the receiver block diagram of Figure 3. The acquisition engine performs fast Fourier transform (FFT)-based acquisition to locate visible satellites and record coarse estimates of their respective Doppler frequency and code phase values to initialize the individual tracking loops. One scalar tracking loop — a frequency locked loop (FLL)-assisted phase locked loop (FLL-assisted-PLL) and delay locked loop (DLL) — is assigned to each visible satellite from the acquisition engine.

Measurements and decoded navigation data (ephemeris, almanac, and so forth) from the tracking loops are provided to the navigation engine, which produces a position, velocity, and time (PVT) solution at a user-defined rate. The user is able to modify the operational parameters and settings of the software receiver through an external text file, represented in Figure 3 as “Parameters and Settings.”

Figure 4 contains the carrier tracking results for IRNSS PRN 1, showing the successful demodulation of the navigation data bits, the comparison of normalized Doppler frequency estimation between IRNSS and GPS, and the computed carrier-to-noise density ratio (C/N0) for the three IRNSS satellites. The normalized Doppler frequency estimates show that the estimation noise in IRNSS satellite tracking is only slightly higher than GPS. However, due to their IGSO orbits, the IRNSS satellite displays considerably modest, long-term Doppler change in comparison to the GPS medium earth orbit (MEO) satellite.

Figure 5 shows the pseudorange residuals against time for the IRNSS IGSO satellites in comparison to GPS PRN 31. The elevated pseudorange residuals for IRNSS satellites are expected in Finland considering their low elevation, lower C/N0, and close-to-zero intermediate frequency in the radio front-end configuration. Figure 6(a) and 6(b) present the static multi-GNSS position solutions using GPS and IRNSS satellites in the form of East North up (ENU) components and scatter plot, respectively.

Using IONEX correction parameters for the ionosphere error and default correction parameters for the troposphere error, as shown in Table 2 the achieved accuracy in terms of 95% circular error probability (CEP) is 4.82 meters with a standard deviation of 1.30 meters. The height accuracy is 5.33 meters (95% confidence). Considering that only two IRNSS satellites were used in the position solution, the accuracy figures are consistent with a GPS-only scenario.

As expected, the geometric dilution of precision (GDOP) improves from 2.02 to 1.85 by the inclusion of IRNSS satellites into a GPS-only constellation. In a hypothetical scenario, we assumed that only three GPS satellites were visible, not enough for a GPS-only position solution. In this case, the two IRNSS satellites were beneficial to obtain a GPS-IRNSS multi-GNSS solution with 95% accuracy of 15.63 meters.

These results — which are within the 20-meter accuracy predicted by ISRO for IRNSS — suggest the possibility that in south Finland (and also in eastern Europe) IRNSS satellites may be able to complement the Galileo constellation until enough of its satellites are deployed to obtain a continuous Galileo-only position fix. These benefits are expected to grow as more IRNSS satellites are deployed in space in the future. Therefore, the impact of these results is considerable and interesting to the positioning, navigation and timing (PNT) research and user community even outside the intended service area of IRNSS.

In conclusion, this study showed that researchers at FGI successfully processed the IRNSS signals using the FGI-GSRx software receiver platform while also demonstrating the benefits to Finland in multi-GNSS positioning from using this emerging navigation system.