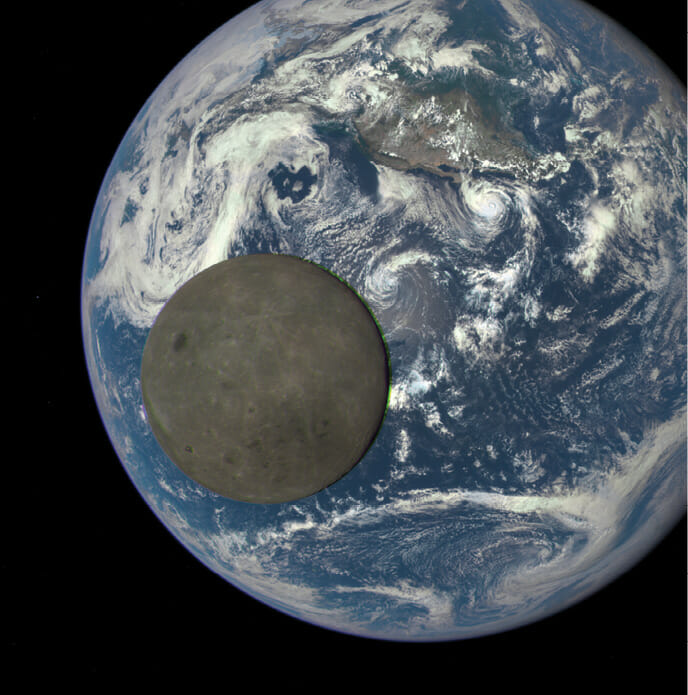 Discussions about spectrum allocation, familiar to GNSS designers and manufacturers on Earth, are now taking place regarding the lunar environment. ITU Radio Regulations constitute an international treaty governing all radio frequency activities. This article shows that GNSS operators in this region must transmit signals in the GNSS S-band rather than in GNSS L-bands.

The far side of the moon offers a unique scientific opportunity to perform future radio astronomy observations, without RF interference arising from human activities. Today, several concrete projects of radio astronomy observatories are being designed for implementation on the far side of the Moon or in orbit regularly above this zone. The International Telecommunication Union (ITU) has defined the Shielded Zone of the Moon (SZM), where a specific frequency Radio Regulation applies to protect radio astronomy, as well as specific international recommendations.

The Space Frequency Coordination Group (SFCG) also has defined frequency bands allocated in the lunar region. These Radio Regulation and Recommendations therefore apply to the lunar GNSS frequencies, since a GNSS system made of lunar orbiters will cover all the far side of the Moon, and therefore must not create harmful interference on future radio astronomy observations in that zone.

The ITU Radio Regulation defines the SZM as follows: “The shielded zone of the Moon comprises the area of the Moon’s surface and an adjacent volume of space which are shielded from emissions originating within a distance of 100,000 km from the center of the Earth” (Figure 1). Because Mars is regularly in the SZM, the specific Radio Regulation protecting radio astronomy in the SZM is therefore also applicable to Mars.

Missions in the Shielded Zone

Radio astronomy observatories will be soon installed in lunar orbit or on the surface of the Shielded Zone of the Moon. Some pathfinder radio astronomy instruments are already in operation in SZM. They are part of China’s Chang’e-4 lander on the moon’s far side, as well as a lunar orbiter named Queqiao (Magpie Bridge), for a radio astronomy (RA) mission in collaboration with the Netherlands, passing regularly in the SZM.

A next preparatory phase for far-side astronomy is Radiowave Observations at the Lunar Surface of the photoElectron Sheath (ROLSES) to be launched by the end of 2021. ROLSES will be on a lander licensed by NASA as part of the space agency’s Commercial Lunar Payload Services program. Although it will touch down in the Oceanus Procellarum region on the moon’s near side, ROLSES’s task of characterizing the RFI generated by lunar soil is crucial for future work identifying other radio signals on the far side.

Another mission to characterize the radio-frequency interference on the moon, nammed Lunar Surface Electromagnetics Experiment (LuSEE), should be launched in 2024 to land in the Schrödinger impact basin in the SZM. The lander carrying LuSEE may also have another payload: DAPPER (Dark Ages Polarimeter Pathfinder), a telescope for detecting 21-cm red shifted signals from the cosmic dark ages. DAPPER was originally designed to be an orbiter around the moon, but it may go on this lander, NASA having funded the work on the mission concept for DAPPER.

The National Astronomical Observatories at the Chinese Academy of Sciences has a tentative plan for a fleet of five to eight satellites flying in formation to form a radio astronomy antenna array in lunar orbit.

To begin preparing for an RA antenna array on the SZM Moon Surface, the Netherlands and DLR plan to test the deployment of radio antennas using robotic rovers (carrying 4 boxes of antenna) designed by DLR. Test are planned in 2021 on the flanks of Mount Etna in Sicily.

Another NASA-funded study for building another lunar radio telescope is called Farside Array for Radio Science Investigations of the Dark ages and Exoplanets (FARSIDE, Figure 2). To design FARSIDE, a team from JPL, University of Colorado, and Caltech is looking to land a payload of four rovers and 256 antennas, totaling about 1.5 metric tons, using lunar landers funded by NASA. The rovers would deploy the antennas, spreading them in four flowerlike petals over a region that is 10 kilometers in diameter. This looks feasable with current technology and plausible later in the decade.

NASA is also funding other radio astronomy observatories in the SZM, as shown in Figure 3. 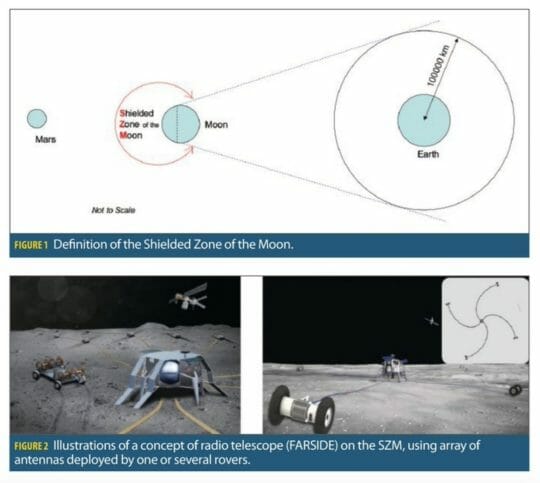 The RD1 recommendation of the ITU (see References section) is not compatible with deciding additional lunar frequency bands, in particular between 300 MHz and 2 GHz, without agreement of the RA community (IAU; IUCAF; ITU-WP7D and for regional levels: CRAF, CORF and RAFCAP).

RD1 states: “The 300 MHz to 2 GHz range should be reserved for radio astronomy observations.” Further, radiocommunication in the SZM shall be limited to the band 2000-3000 MHz. RD1 also indicates that other specific new bands are possible in the SZM, above 3 GHz, to be decided in agreement with the radio astronomy community.

Also: “The entire range below 30 MHz should be reserved for radio astronomy observations,” while it is important to extend the protection of VHF radio astronomy frequencies up to 100 MHz.

RD1 reminds that “Article 22, Numbers 22.22 to 22.25 (RD3) of the Radio Regulations (RR) recognizes the necessity of maintaining the SZM as an area of great potential for observations by the radio astronomy service and by passive space research and consequently as free as possible from transmissions.” RD1 therefore shows how to avoid issues with the Radio Regulation by preserving the 300 MHz-2GHz band from interferences coming from transmissions in the SZM.

RD2 mention some RA bands which are only the more important considered at the moment of its publication more than 20 years ago, and only some bands related only to spectral observations from Earth. But radio astronomers regulary discover more and more spectrum lines, and, moreover, RA.314 doesn’t cover continuum observations planed from the SZM (while RA.479 related to protection of the SZM covers continuum observations and all spectrum lines between 300 MHz and 2 GHz). The documents to respect and to take into account to comply with the Radio Regulation are therefore RD1 and RD3, not only RD2.

Due to the specific Radio Regulation applicable in the SZM, a transmission which would be declared, even on a non-interference basis, as lacking successful coordination with radio astronomy (under article 4.4 of ITU RR), in particular for frequencies above 300 MHz and bellow 2 GHz, would be not compatible with the Radio Regulation. Section V of article 22 of the Radio Regulation [RD3] has been set up by ITU also in order to avoid the SZM becoming polluted before the arrival of the radio astronomy observatories.

Being inside the forbiden 300 MHz-2 GHz band, the GNSS L-bands (1164-1300 MHz and 1559-1610 MHz), if used by these orbiters or beacons, would not respect the Radio Regulation applicable on the SZM. The GNSS L-bands transmitted from the lunar region are an important threat to radio astronomy on the SZM, as shown in RD1.

It is necessary for the lunar GNSS orbiters and beacons to use the lunar bands allocated by SFCG for local NAV transmissions (that is PNT). One exemple of allowed SFCG bands are the GNSS+MSS S-band (2483.5-2500 MHz; RD4) already used by three GNSS orbiting Earth and planned for use by several other new GNSS systems as shown in Table 1.

Moreover, most of these bands are hosting mass-market PNT technologies on Earth (like the GNSS L-bands to avoid), which can be reused in the lunar environment without endangering radio astronomy.

If one or several GPS L-bands start to be used all around the Moon surface, the BeiDou, GLONASS and Galileo L-bands are unfortunately likely to be progressively used up to 11% of the 300 MHz-2 GHz band to protect, and even a few % of 300 MHz-2 GHz used by a local GNSS system would threaten the possibility to perform RA continuum observations.

Since there are several potential GNSS-like systems planed to orbit around the Moon, international coordination to protect radio astronomy by avoiding local L-band transmissions is required in lunar GNSS interoperability groups, like for instance in the International Committee on GNSS (IGC) of the United Nation Office for Outer Space Affairs (UNOOSA), which, as a UN organisation, like ITU, must encourage respect for the ITU RR and REC 479-5.

The GNSS S-band is used on Earth by more GNSS systems than might be expected, as shown by Table 1. These GNSS (without mentioning SBAS here) are from USA, China, India, and perhaps later from South Korea, UAE, Japan, Europe and Russia.

It can be noted in particular the Japan Aerospace Exploration Agency (JAXA) tested GNSS codes in the GNSS S-band thanks to the succesful ETS-VIII experimental GEO satellite, and the GNSS S-band band was initially considered for the first generation of Michibiki, while being an open option for the second generation of this system.

GPS 4th generation could also consider adding GNSS S-band, since it was one of the candidate bands for the “GPS science signal,” the 4th GPS civil signal previously foreseen by NASA a few decades ago.

As well, the GNSS S-band might concern GLONASS evolutions since this band contains frequencies doubling the ones of the so-called Glonass-L2 band, this affording an immediate solution to the narrow lane resolution.

Finally, the Globalstar constellation, a low-Earth orbit satellite constellation for satellite phone and low-speed data communications, declared itself as a GNSS system, as shown by the top right of Figure 4 extracted from a Globalstar paper published in the ION GNSS 2018 conference. Since then, Globalstar satellites have been equipped with the Echoridge accurate PNT service.

The GNSS L-band is therefore far from being a unique solution to get a lunar orbital PNT system reusing a band which is for mass-market GNSS on Earth. According to the Radio Regulation in the SZM, when a frequency band allowing a lunar service is available without impacting radio astronomy, this frequency band shall be used instead of any band threatening radio astronomy in the SZM. 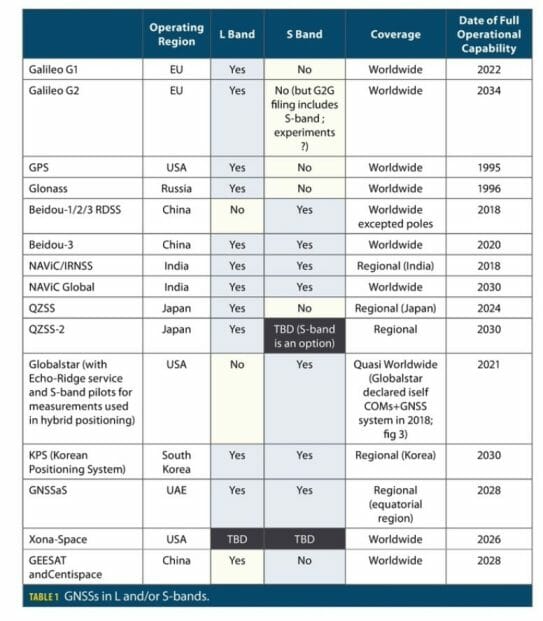 Of course, the advantageous use in the lunar region of GNSS L-band signals effectively transmited by the GNSS Earth-orbiting constellations themselves is not an issue, since the SZM is not concerned in that specific case, as shown by Figures 4 and 5. Avoiding local GNSS augmentation in L-band, in addition to the protection of radio astronomy in the SZM, would moreover present the following system advantages:

• Maximize performance of GNSS terrestrial systems in the lunar environment

For a maximum performance of GNSS terrestrial constellations in the lunar environment, simultaneous use of GPS, Galileo, BeiDou, GLONASS and later Global NaVIC is encouraged in L-band, to benefit from the Interoperable GNSS Space Service Volume defined by the International Committee GNSS (ICG).

For a maximum performance of GNSS terrestrial constellations in the lunar environment, correction of the terrestrial ionospheric biais could be needed, using therefore dual-frequency terrestrial GNSS signals (typically L5/E5a/B2a + L1/E1/B1). 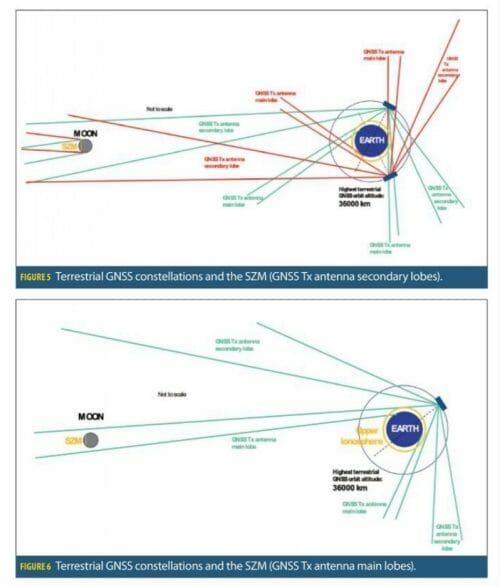 Radio Regulation and international recommendations clearly show the need to not use in the SZM any frequency band situated between 300 MHz and 2 GHz (and below 100 MHz).

Space agencies and commercial industry shall make sure the provisions of the Radio Regulations are taken care of regarding the protection of radio astronomy in the SZM. It is of the outmost importance to apply the ITU-Radio Regulation in the SZM and its Recommendation 479-5 (RD1), and SFCG REC 32-2R2 (RD4).

It is also time to consider lunar orbital missions (with cubesats for instance) to both perform radio astronomy and spectrum monitoring in the critical 300 MHz-2 GHz band, and to detect interference to RA from emissions, including the ones coming from communication and PNT RF systems in the lunar region. Article 4.4 of ITU RR is not appropriate in the specific case of protection of RA in the SZM since there is no guarantee of no interference. However, some operators still believe it is possible to operate frequencies under RR n°4.4 in the SZM, and this is the reason why lunar spectrum monitoring missions are strongly encouraged.

Solutions being proposed today are in line with the SZM protection: