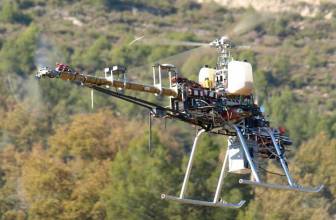 Unmanned aerial systems will contribute tens of billions of dollars to the American economy once they are integrated into the U.S. airspace, according to a new industry-sponsored research report.

UASs will represent an estimated $13.6 billion domestic market within three years after operational rules are in place, according to The Economic Impact of Unmanned Aircraft Systems Integration in the United States, a report released March 13 by the Association for Unmanned Vehicle Systems International (AUVSI), the leading industry group for unmanned systems.

That $13.6 billion — which includes not only money spent directly on UAS research and procurement but the secondary impacts of new job holders buying homes and other goods — is expected to grow to a total of $81.1 billion in the first ten years.

The report assumes, however that unmanned craft will be able to operate in the national air space (NAS) by 2015, the deadline for UAS/NAS integration Congress gave the Federal Aviation Administration (FAA) in the 2012 FAA Reauthorization Act. The FAA is falling behind on that, however, and only last month called for states to submit proposals to create essential new six test sites.

Volumes of new regulations have to be hammered out and significant technical challenges met, especially in the development of the sense-and-avoid technologies needed to replace some of the adaptive skills of a pilot.

The regulatory barriers, not just to operations in the NAS but to UAS testing, are widely seen as holding the industry back — an assessment with which the FAA appears to agree.

In 2012 the agency predicted in its Annual Aerospace Forecast that there would be “roughly 10,000 active commercial UASs in five years” based upon “the expected regulatory climate” — the same number and condition the agency forecast in 2011. In this year’s forecast, however, released just a week before the AUVSI report, FAA noted the regulatory hurdles involved and cut its estimate by 25 percent.

“We believe that the civil UAS markets will evolve within the constraints of the regulatory and airspace requirements,” the agency wrote, “Once enabled, commercial markets will develop and demand will be created for additional UAS and the accompanying services they can provide. Once enabled, we estimate roughly 7,500 commercial UASs would be viable at the end of five years.”

The 7,500 number does not incorporate the local, state, and federal agencies, including law enforcement, operating UASs under Certificates of Authorization (COAs). Why? Those craft don’t have to be integrated into the National Air Space, said an FAA spokesperson.

Application Markets
The AUVSI report does include both private and public sector operators and, in fact, identifies precision agriculture and public safety as comprising 90 percent of the known potential UAS market. That said, it is clear that, once unleashed, unmanned systems have enormous potential across sectors ranging from real estate to oil pipeline maintenance. Interestingly, in a very informal spot survey during a March 14  Inside GNSS webinar on unmanned systems, 45 percent of the attendees said they thought the primary UAS market would be surveying and mapping.

The researchers for the AUVSI report, Darryl Jenkins, an airline industry analyst and Dr. Bijan Vasigh, an economics and finance professor at Embry-Riddle Aeronautical University in Florida, developed their estimates by looking at the markets for UAS in other countries, particularly in Japan.

The growth curve would be very steep over the first three years, they said, “doubling the first year” then dropping to 50 percent growth the next year and 5 percent the year after that. This is a realistic assessment, they say, because the value of using unmanned systems is clearly established in other countries.

The reason UASs are not being used in the United States has to do with regulation, not utility. Once that issue is addressed, the already-tech savvy farming and public safety communities are likely to rapidly adopt UASs — as has happened elsewhere.

“We’re talking about a product is probably in the $30,000 to $40,000 range, easily manufactured, easily trained to (be) used by customers – a small UAS with a lot of multiple applications,” Jenkins told reporters March 13. “What we found in other countries is that when these are introduced you have a very high initial rate of growth, which then leveled off. Three to five years is a reasonable time for the entry of this into an economy and after that you see lower growth, but after [the initial growth] we are projecting growth higher than GDP. So we’re looking at initially high rates of growth then leveling off where it’s growing just a tad faster than the economy.”

The researchers also forecast that the UAS industry would generate 70,000 jobs in the first three years, of which nearly half would be high-paying manufacturing jobs. By 2025, they estimated the industry would have created a total of 103,776 new jobs

There are no import or export limits on UASs, they noted, which means there are suppliers already available and the possibility for even more growth.

Global Market
The world market for UAS is substantial, just over $89 billion in direct spending on UAS over the next 10 years, according to an estimate by the Teal Group, a defense and aerospace market analysis firm headquartered near Washington, D.C. Teal expects just under $5 billion to be spent on UAS R&D and procurement in the United States this year, with roughly another $2 billion in spending in the rest of the world. Two-thirds of that international spending would be on procurement, and the rest R&D, according to a chart in their 2012 report.

By the year 2022 Teal expects total R&D and procurement for unmanned aerial systems to be around $11 billion, split roughly evenly between the United States and the rest of the world.

The firm is working on a new UAS market study that should be out in May. Teal analyst Steve Zaloga, said he expects the new report to show “some drops in the forecast in the short-mid-term due to the U.S. cuts as well as the current economic situation in Europe.” On the other hand, he said in an email response, “our forecasts for Asia-Pacific are likely to be higher.”

The market for commercial UAS is so substantial, in fact, that Teal is giving it its own report. The firm will now issue a separate report for the UAS civil market separating it from the overall estimates that include military spending.