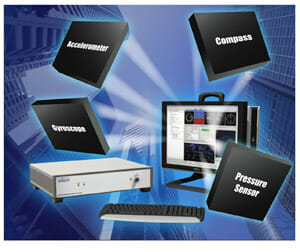 SimSENSOR is targeted at the R&D environment and enables performance testing of sensor fusion algorithms in navigation systems that include MEMS inertial sensors and one or more GNSS system. The software works in tandem with Spirent’s multi-GNSS constellation simulators by simulating MEMS sensor outputs on a common trajectory with the simulated GNSS signals. Trajectories that include representative human motion gestures, such as arm movements, are included with SimSENSOR.

The software supports the testing of fusion algorithms that take inputs from a wide variety of sensors, including accelerometers, gyroscope, magnetometer, digital compass and barometric height sensors. Representative MEMS noise models and errors such as bias and drift are also included and are available under user control.

SimSENSOR is now available for order. For more information on the new sensor simulation software, visit the Spirent website.