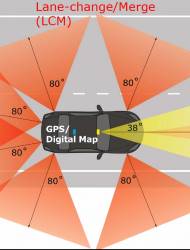 Tied up in the long-running fight over reauthorizing the Highway Trust Fund is funding for a program to develop GPS-enabled crash avoidance technology for vehicles.

Tied up in the long-running fight over reauthorizing the Highway Trust Fund is funding for a program to develop GPS-enabled crash avoidance technology for vehicles.

The U.S. Department of Transportation (DoT) Connected Vehicle program is working to develop safety and traffic management systems that would alert drivers to unseen dangers and help officials ease traffic congestion. Using a WiFi-like radio transmitter/receiver, the technology would enable vehicles to share information such as location, speed, acceleration, and steering angle with nearby vehicles some 10 times a second. The GPS-based devices, which can be built in or added after the vehicle is purchased, would process the incoming information and use it to alert drivers to danger.

“The receiving vehicle is able to determine if there is an imminent crash threat,” explained Shelley Row, director of DoT’s Intelligent Transportation System (ITS) Joint Program Office. “The two communicating vehicle systems can then activate warning systems to the drivers for things that the driver may not otherwise be able to detect.”

The technology could prevent up to 82 percent of the crashes between vehicles with unimpaired drivers, according to DoT’s Research and Innovative Technology Administration, which is developing the systems. Vehicle collisions cause more than 30,000 deaths and $99 billion in medical and other costs every year, according to the Centers for Disease Control, and are the leading cause of death for Americans between the ages of 4 and 35 years of age.

Vehicle-to-vehicle or V2V connections are not the only way the technology can prevent crashes. Vehicle-to-infrastructure information can alert drivers to hazards as well. Traffic signals, for example, can be equipped with devices that send out signal phase — red, yellow green — and timing.

“The vehicle will be able to pick up that signal,” said Row, “and will know in advance . . . when the signal is going to turn and whether the vehicle is moving too fast to clear the intersection.”

V2V and V2I technology may also enable local and state officials to better handle the effects of an ever-growing number of cars on the road.

“We believe that if one had information coming off of a vehicle, that it would be very valuable to state and local agencies to help them better manage traffic conditions, manage congestion — manage it for environmental impact,” said Row.

Pilot Study in Michigan
To see how the safety applications work in the real world RITA is conducting a year-long pilot program in Ann Arbor, Michigan, starting August 21. The pilot will incorporate a mix of cars and other vehicles, such as trucks, as well as infrastructure.

“There are 2,800 vehicles that will be equipped with three different types of equipment,” Row told Inside GNSS. “We will be testing six different crash avoidance applications during the course of the year and collecting data on the effectiveness of those applications.”

Data from the safety tests will help the National Highway Traffic Safety Administration (NHTSA) assess whether the technology is far enough along and sufficiently beneficial to begin the steps to implement it. In 2013, NHTSA will assess whether to pursue regulations for use of such technology in cars and other light vehicles and, in 2014, it will judge its use for heavy vehicles like trucks. In 2015 the agency will decide whether to develop infrastructure guidelines for state and local agencies.

NHTSA could recommend that the technology become part of the New Car Assessment Program (NCAP) program. Under NCAP auto manufacturers would voluntarily decide to equip vehicles with the devices to receive improved safety ratings, said a DoT spokesperson in an email response,

“The data could [also] show that V2V technology is not sufficiently beneficial, or ready, to warrant either approach,” explained the spokesperson, “in which case research would continue.”

Congressional Roadblock
The program could be seriously delayed, however, under a funding proposal now before Congress.

The House, under bill H.R. 7, chose to maintain the current funding level for ITS research at $110 million per year through fiscal year 2016. The Senate bill, S. 1813, only authorizes spending for two years and cuts the funding to $100 million annually. That $100 million would also be split, with at least half going to a program to help fund state and local efforts to deploy ITS technology, including such things as variable message signs.

Some 70 to 80 percent of the ITS research funding goes to support various aspects of the Connected Vehicle program, said Row, and splitting the funding would have a “major impact.”

“Our current budget projections would require a substantial amount of that $100 million,” she told Inside GNSS, “and if the grant program took a minimum of 50 percent of it, it would very likely have an impact of, at a minimum, slowing our work and not enabling us to support NHTSA’s 2013 decision or 2014 decision.”

The loss of research monies would also “very likely” trigger the elimination of “all the other research that we do in the ITS program,” said Row.

ITS America, a nonprofit organization that advocates for the intelligent transportation community, would like to see the House’s approach to research adopted but would like to have money found for deployment as well.

“We support a fully funded ITS research program,” said Paul Feenstra, ITS America’s consultant on government affairs, “but we also believe it is critical that government does more to help state and local agencies deploy ITS technology to address their transportation challenges.”

Highway Trust Fund Running Out of Gas
House and Senate conferees are now working to find compromises on their respective reauthorization bills before the current stop-gap measure expires on June 30. So far the unusual nature of the Highway Trust Fund – its money comes directly from dedicated federal gas taxes – has eased some of the delays that have hamstrung other spending bills.

That, however, appears about to change. The Congressional Budget Office predicted in January that, because people were driving less and piloting more fuel-efficient cars, the fund would be empty by 2014 unless new sources of revenue are found.

In 2009, a congressionally mandated National Surface Transportation Infrastructure Financing Commission (NSTIFC) recommended that the United States should look into developing a system for assessing fees based on vehicle miles traveled (VMT) rather than gasoline taxes — and pointed firmly to GNSS systems as a key enabling technology for accomplishing such a transition.

In Oregon, the mileage-fee idea was tested in a 2006 pilot program deemed a “proof-of-concept” success by the Oregon Department of Transportation (ODoT). And in 2008, an eight-month pilot project studying the potential for reducing highway congestion in Washington state’s Puget Sound area using GPS-based variable tolling concluded that the benefits could exceed $28 billion over a 30-year period.