The Satellite-Based Augmentation Systems Interoperability Working Group has grown from 4 members in 1997 to more than 10 now, and logged significant progress in forming a global aviation support system.

The Satellite-Based Augmentation Systems Interoperability Working Group (SBAS IWG) meeting #36 in February gathered all SBAS providers except China and was hosted by Airports Authority of India (AAI) in Delhi. As the number of members and of projects represented has increased during the past 10 years, growing from 4 in 1997 to more than 10 now, and in order to support the new partners on their own topics, two sub-groups, a technical sub-group and an operations sub-group were created 3 years ago.

Among the outcomes produced in the past 5 years and currently, some of the most important ones are:

• A joint technical document (ICD) describing the dual-frequency multi-constellation message definition (for the SBAS L5 channel) produced in 2017, which has been taken over by the standardization bodies for preparation of the Standards (Standards and Recommended Practices (SARPS) and Minimum Operational Performance Standards (MOPS) for the next generation dual-frequency multi-constellation (DFMC) SBAS);

• A joint technical document presenting the Definition of the DFMC SBAS document produced in 2017;

• Joint papers representing the IWG position and/or recommendation towards the standardization bodies;

• A joint presentation, regularly updated, presenting the Global SBAS concept (multi-regional) supported by all IWG members. This presentation can be downloaded from SBAS IWG agencies websites, while the SBAS IWG website is under preparation; an associated fact sheet summary is also available; 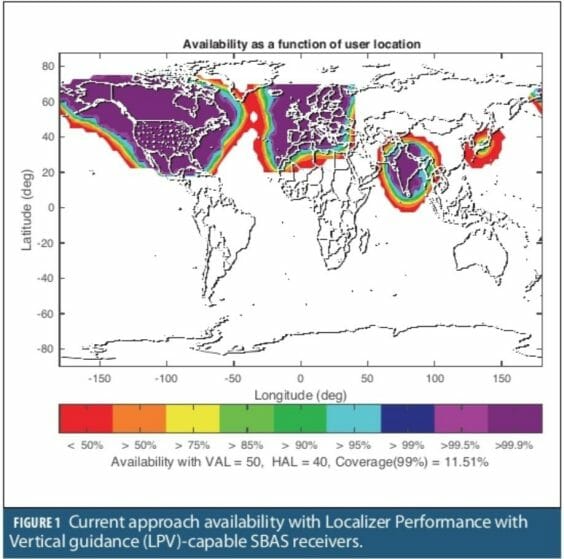 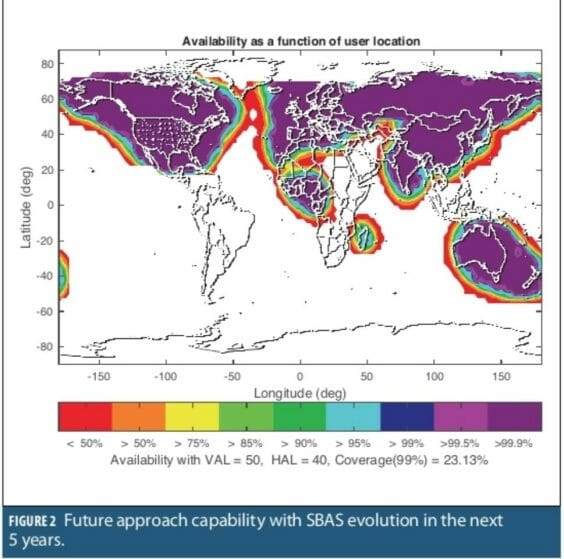 The success of SBAS technology makes the role and responsibility of the SBAS IWG more important. The Global SBAS joint presentation demonstrates the Performance and Service Coverage achieved now and what is planned for 2030 with the implementation of new systems (see Figures 1 and 2).

Figure 3 shows that a quasi-global coverage could be achieved around this time with the modernization of operational and new systems to dual-frequency, multi-constellation augmentation, but this is subject to strictly maintaining the backward compatibility (mandatory for the equipped fleet) and the full interoperability of all these regional systems, in particular in regions with coverage overlaps.

The current number of SBAS-equipped aircraft by region, including general aviation (small planes), air taxis, helicopters, air carriers and cargo aircraft, and business and regional aircrafts, is 103,642 in North America, 982 in Europe, and 140 in Japan.

For this meeting, a new session, the Outreach Event, gathered several major other stakeholders from the user side: airlines, aircraft manufacturers and avionics manufacturers. This event was very successful and will be repeated in the future. The most noticeable items and outcomes of this one day event are:

• SBAS adoption by airlines (Japan Air, Air France, Go) perspectives on SBAS. In particular, Airbus presented a video of several tests done with the European Geostationary Navigation Overlay Service (EGNOS), the most recent and impressive being an automatic landing of a A350 XWB in Toulouse solely with EGNOS signals. Airbus and ATR, a leading manufacturer of regional aircraft up to 90 seats, also presented their plans for the equipage of their aircrafts.

• Airbus plan for the fleet equipage with the SLS (SBAS Landing System) function.

The outreach event was the opportunity to address such topics as ATR’s SBAS capabilities; the new Collins Aerospace GLU2100 multi-mode receiver with integrated instrument landing system (ILS), GPS and VHF omni-directional receiver (VOR), and its benefits for the GPS Aided Geo Augmented Navigation (GAGAN) of India and other SBAS; and finally an open discussion with feedback from airlines , aircraft and OEM manufacturers to the SBAS service providers.

This Outreach Event will be maintained and repeated in the future. 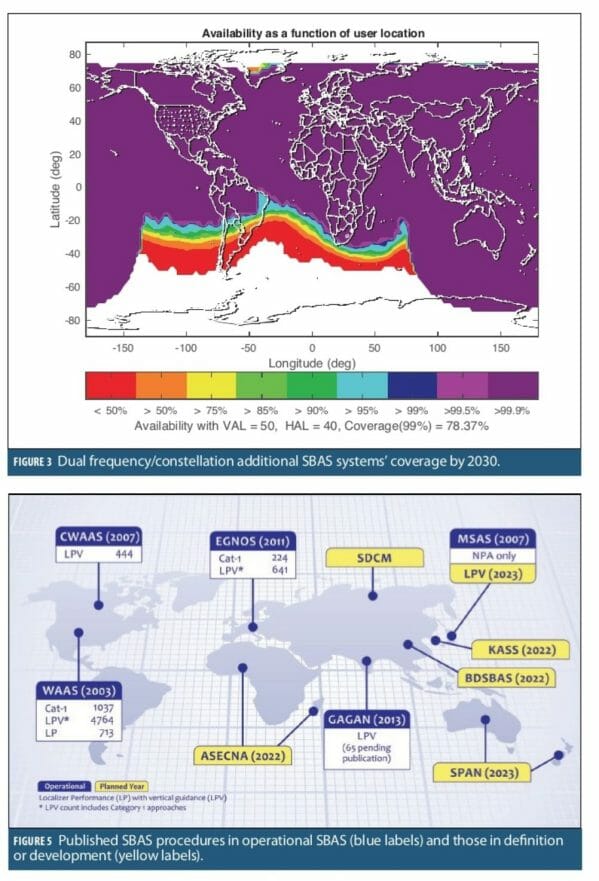 The next SBAS IWG meeting will behosted by the Agency for the Safety of Air Navigation in Africa and Madagascar (ASECNA). It was initially foreseen in October 2020 in Madagascar. This plan will be re-assessed due to COVID-19.