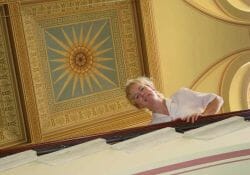 Ruth Neilan outside the history library at the GeoForschungsZentrum in Potsdam, Germany.

When Ruth Neilan was named director of what is now known as the Central Bureau of the International GNSS Service (IGS), she had an immense undertaking before her.

A voluntary civilian federation, the IGS compiles and analyzes GPS (and more recently, GLONASS) satellite data. From these, the IGS creates highly accurate products —such as precise satellite orbit and clock files — and makes them freely available to engineers, scientists, and researchers all over the world.

When Ruth Neilan was named director of what is now known as the Central Bureau of the International GNSS Service (IGS), she had an immense undertaking before her.

A voluntary civilian federation, the IGS compiles and analyzes GPS (and more recently, GLONASS) satellite data. From these, the IGS creates highly accurate products —such as precise satellite orbit and clock files — and makes them freely available to engineers, scientists, and researchers all over the world.

The latter folks use the IGS data to improve the accuracy of their own GNSS positioning and timing results based on observations from the same set of satellites, using IGS products in place of the broadcast data.

Originally known as the International GPS Service for Geodyanmics, the standardized global tracking network was initiated by NASA and NOAA in the late 1980s. Today, the IGS Central Bureau is managed by NASA’s Jet Propulsion Laboratory (JPL) at Caltech in Pasadena, California, where Neilan has worked for nearly 25 years. IGS has 200 participating organizations —mostly public, government, and research agencies — with upwards of 400 permanent ground stations and data and analysis centers in more than 80 countries.

But in the early 1990s, all of that was far in the future. Neilan and the IGS had to create the building blocks themselves: setting standards, agreeing upon specific formats for data collection and processing, deciding how much to log to guarantee the precise results they needed. They succeeded in great part because of Neilan’s passion and optimism that GNSS technologies could — and do — bridge geopolitical boundaries.

“Through IGS, developing countries can join an international effort. People are very enthusiastic about contributing,” she said. “Off-the-shelf products have developed to such a point that they can leapfrog into the highest technology that’s available. The difficulty we have is getting enough resources to put their efforts on solid ground and ensure sustainability.”

She recalls crawling beneath the drafting tables in her father’s engineering firm in Somerset, a small Appalachian town in southwest Pennsylvania, and losing herself in books. She especially like the one with fascinating photographs of Asia and, in fact, went on to study Mandarin Chinese for five years.

As a child, she was convinced that she would “never” be an engineer. But blessed with a surefire sense of direction that she calls “Zen navigation,” Neilan loved reading maps and making precise measurements.

At college, she gravitated to The Pennsylvania State University’s engineering technology program, earned an associate’s degree, and became a surveyor. But she still wasn’t convinced that engineering should be her life’s work, so she took a detour.

A two-year globe-spanning tour started her on the path that combined her passion — Asia and the world — with what turned out to be her calling: engineering and the development of GNSS.

On her sojourn Neilan crossed Turkey and Afghanistan, worked as English editor for a Taipei magazine, climbed to the Mount Everest base camp, and attained an altitude of 19,200 feet— without oxygen — while crossing into the Rowalling Valley along the Tibetan border. Along the way, Neilan realized she was good at engineering.

She returned to the United States to earn a bachelor’s degree in civil and environmental engineering plus a minor in Asian studies, graduating with distinction from the University of Wisconsin at Madison in 1983.

Although the buzz about GPS began perking in the early 1980s, nothing was taught at the university level. After graduating, Neilan visited a friend at the Jet Propulsion Laboratory at California Institute of Technology in Pasadena, California. Hoping for nothing more than ideas for a thesis topic, Neilan arrived wearing flip-flops and shorts. She met with several people working on GPS and, by the end of the day, she had a job.

She put herself on what she laughingly refers to as the first in a series of “five-year plans,” working for JPL while pursuing her master’s degree. She finished her thesis, “An Experimental Investigation of the Effect of GPS Satellite Multipath,” in 1986.

Neilan’s first major project out of graduate school put her at the hub of the emerging GPS infrastructure. JPL assigned her to get the Deep Space Network’s first GPS receivers and meteorological instrumentation up and running. As that project unfolded, she also managed seminal projects measuring crustal deformation, tectonic motion, and earthquake fault monitoring using GPS techniques.

Starting in 1990, a planning group of five leaders — including Neilan and her mentor at JPL, Bill Melbourne — began meeting to plan the way forward for a global network. Neilan led implementation and operation of ground data systems for the GPS Ground Tracking Network. At about the same time, she also took on the separate task of coordinating the sub-network of six GPS tracking stations required for mission support of the GPS precise orbit determination experiment flown on the satellite TOPEX/Poseidon.

In 1992, she became GPS Operations Manager for the NASA/JPL global network and for scientific support of regional experiments, overseeing project management and technical direction of field engineering for NASA scientists and geodetic tasks at the University NAVSTAR Consortium (UNAVCO) in Boulder, Colorado.

One year later, she was named director of IGS.

The Global Grid and Beyond

Neilan’s serves on the advisory board of the U.S. Positioning, Navigation and Timing Executive Committee, which addresses such issues as policy, planning, management, services, capabilities, and funding.

“This board provides an additional assurance that there is a voice for users,” Neilan says. “The board includes international people, which emphasizes the global nature of GPS.” It also underscores the value that the executive committee places on the international community as part of the process, she adds

Since 2005 she also has served as vice chair of the Global Geodetic Observing System, which provides continuous, precise observations of the three fundamental geodetic observables and their variations: the Earth’s shape, gravity field, and rotational motion. She says a stable, sustainable global reference frame is crucial for all Earth observation and for practical applications ranging from agriculture to the dynamics of atmosphere and the oceans.

The system is beginning to help scientists get their arms around the complexities of seismic activity and climate variation. “Natural hazard detection and mitigation is a really important use of GPS and continuous networking,” Neilan says. “Less than a day after the earthquake that triggered the tsunamis in the Indian Ocean in 2004, we could see that our IGS station in Singapore had moved almost an inch. Our IGS stations in India also had moved.”

Neilan’s zest for travel makes her an ideal fit for her job, which requires frequent trips to developing countries. She lights up when talking about bringing Africa’s 50-plus nations into the grid. This effort, known as AFREF (which stands for unification of African Reference Frames) includes vertical data as well as gravity observations. However, she emphasizes that planning on a continental scale does not have to be “top down or all at once.” Instead, she focuses on assisting newcomers put in GPS systems that meet standards and follow conventions used by the rest of the world.

If Neilan had just one magic GNSS wish, it would that everyone understood the importance of tying into the global grid, known officially as the International Terrestrial Reference Frame. “It’s easy to remotely sense an area, but often contractors or consultants set up their own little local reference system,” she explains. “Then, when they try to link up or extend their project, it has no relationship to the country’s grid, much less the international grid. It’s been very hard to get this across to the mapping and GIS people.”

NASA’s return to space exploration opens up the possibility of extending GPS-like constellations to the Moon and to Mars. “We need to have a way of commonly and seamlessly referencing all the vehicles,” Neilan says. “An extended coordinate timing system would reduce errors.”

Neilan’s daily contacts with colleagues around the globe reinforce her optimism that GNSS technologies can bridge geopolitical boundaries.

“Open availability [of data] is seeding so much innovation and fostering better understanding of our world,” she says. “IGS is the global sandbox. Everybody can have fun and play.”

GNSS Mentor
Bill Melbourne at the Jet Propulsion Laboratory, a visionary who’s many accomplishments included leading GPS technology developments at JPL. “His support in shaping the GPS global network and working with our international partners laid the foundation for the IGS.”

Heights that are given from GPS (h) are relative to the GPS ellipsoid WGS84. “To get the vertical position of a point, the separation between the geoid and the ellipsoid (N) must be known — with care. You can think of the geoid as the surface of the earth approximated by the mean sea level.”

Her Compass Points
Neilan credits her family first – her “brilliant” jazz pianist husband, “terrific” kids, and parents who “are always there, even for GPS observations in American Samoa, Easter Island, and remote areas of Mexico.” Her other compass points are “the wonderful IGS/GNSS community of colleagues and friends,” and “The great game — soccer!”

Fell in love with GPS when . . .
. . . she realized that this revolutionary technology could provide precise position and navigation aids for anyone, anywhere, anytime. “(This) levels the playing field to an extent — especially in the developing countries.”

Knew GNSS had arrived when. . .
. . . CASA UNO ’88 deployed the first civilian global tracking network for orbit improvements to monitor crustal deformation at many stations in Central and South America. “This was the first large-scale study of crustal deformation. Now it is done continuously for hundreds of stations around the globe.”

Influences of Engineering on her Private Life
“Time motion studies in the kitchen!”

Popular Notions about GNSS that Most Annoy
“That GPS will operate according to specifications when actually it is far, far better than that. We need to develop the notion of performance-based capabilities and delivery of services.”

What’s next?
For Neilan and IGS, this includes integrating the upcoming signals from GALILEO, COMPASS and other new GNSSes into the mix. They are aiming for seamless incorporation to take advantage of the signals “so that we can use this technology over several decades in order to better understand our changing world.” And, as always, IGS’s on-going effort to promote dialog and a forum for the international use of GNSS.